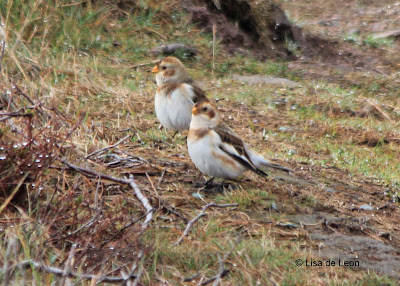 The Snow Buntings (otherwise known as a "snow flake" because of their white underside) came and left before the snow.  When I saw them in late October, I thought they would be around for quite awhile. They fooled me. After about a week, they moved on. Maybe, just maybe, they may return to Cape Spear before winter passes. I was looking at my pictures of their visit and found some differences in the wing pattern that made me wonder. 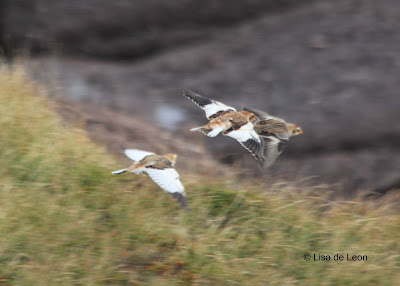 While sitting on the ground, these buntings all looked pretty much the same. But when they lifted off, I noticed significant differences in the wing pattern. Of these three birds, each one has a different amount of white on the wings, from more white to less white. Why? I did a lot of reading and picture review, and I couldn't find a single web site that showed the differences I see here. Text reported that the male has more white than the female and juveniles. Applying that info to these pictures, it suggests the bird to the farthest left is a male. Is the middle bird a female with the bird on the right being an immature?  If any one can confirm this, please leave a comment. 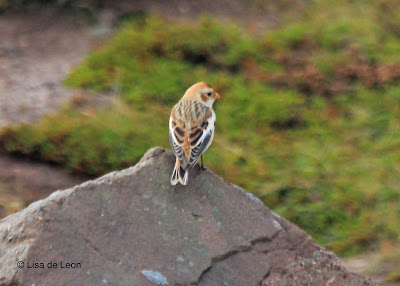 Snow Buntings are ground birds  that forage for seeds, insects and spiders. When necessary, they also eat crustaceans. I found it interesting that this bird molts only once a year when it changes from its black and white breeding plumage into a pattern of brown and black streaks with a rusty color about its head, throat and sides. As a result of much time spent feeding on the snow-covered ground, the color wears away over the winter until the bird emerges in the spring once again into black and white, only. 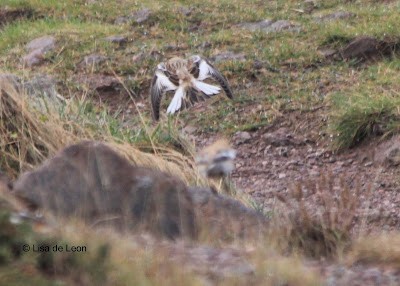 As seasons come and go and one bird at a time, I am gradually collecting information that will continue to enhance the birding experience. Who knew there was so much to learn?﻿
Posted by Lisa de Leon at 7:56 AM