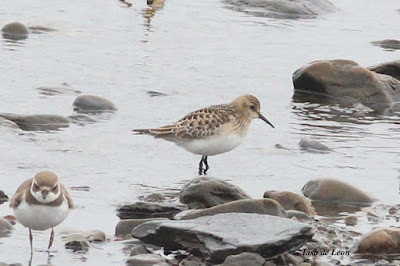 I guess it could be said the Baird's Sandpiper has been my nemesis bird. For three years I have traveled to St. Shott's Beach to see one that has routinely been reported there. 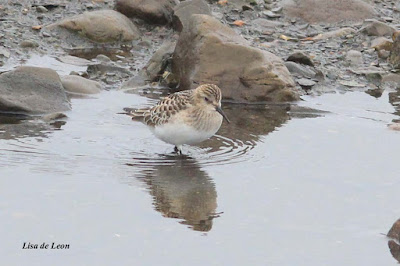 Each time I left with a boatload of pictures certain and sure in every way I had seen the Baird's. Each time I endured the harshest of weather in my effort. Each time it turned out I had amassed a collection of Semipalmated Sandpiper and White-rumped Sandpiper images.  Each time I returned home and poured over the images and my field guides to try to see the differences between those two similar species and my target bird - the Baird's.  I was beginning to think I would never see the Baird's. 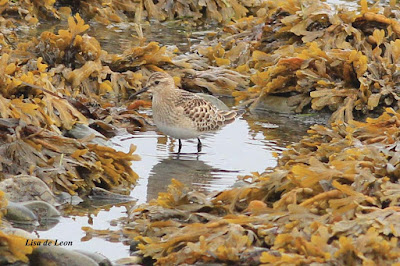 That situation finally turned around when I spotted a shorebird that could really be described as "buffy," expecially on the breast. Its wings extended beyond the tail, and its beak appeared to be slender and longer than a Semi. Could this finally be it? Having no confidence in my ability to tell the difference, I asked two other birders what they thought. Then, the expert arrived on the scene, and the Baird's was confirmed. At Last! 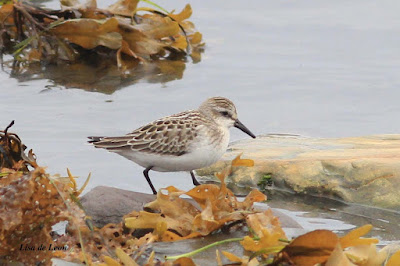 I think it was a little easier this time because there were few birds on the beach in Renews, and the weather was perfect for standing for long periods of time gazing through my binoculars. 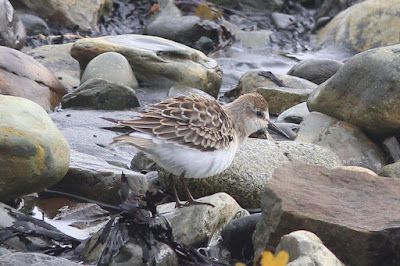 However, compounding the identification effort is the variation in plumage of the other peeps. Some, like this Semipalmated Sandpiper shown in these two images ranged from nearly breeding plumage to non-breeding plumage and everything in between. Clearly, the semi  has a shorter, more stout beak than either the White-rumped or the Baird's. 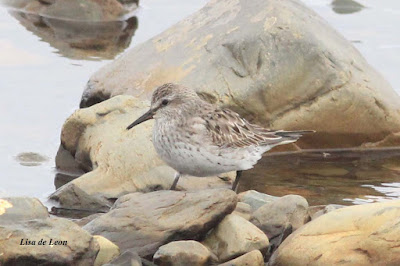 Sometimes, the White-rumped Sandpiper (shown here) is easier to identify by its grayish appearance, longer beak and long wings. The streaking that sometimes extends to the flanks is a leftover of breeding plumage, but is not always present in juveniles, nor obvious in non-breaking plumage. 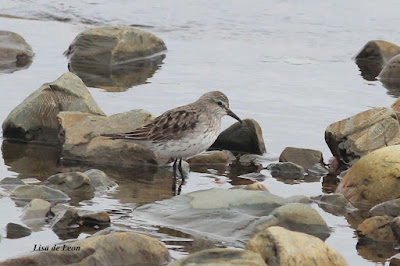 To illustrate how challenging the identification of the White-rumped can be, I have provided two additional images of a White-rumped Sandpiper with quite different plumages sported by this bird. One variation appears much browner than the other very gray bird. It goes without saying, the rump is white. That, too, differentiates it from the Baird's that has a mostly brown rump. 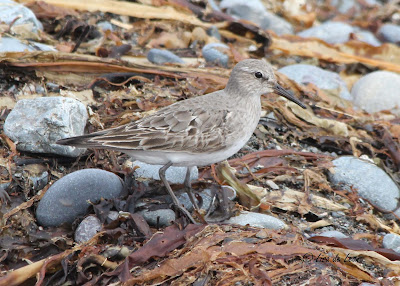 It is the gray plumage that is the easiest for me to pick out. The plumage in the preceding shot gives cause for pause. It is the streaks along the flanks, the overall gray streaking on the front and the wings that help me out. Do I now feel confident I will always know the difference? Absolutely not, but I have added a little more information to my bank of knowledge as small as it is.
Posted by Lisa de Leon at 8:16 AM