Prairie Warbler and Much More 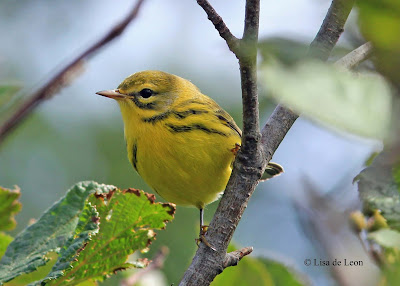 When Ken Knowles reported a large variety of warblers on Bear Cove Pt. Road, I was beside myself. When could I go? Well, the weather and a free day finally matched up, and I headed out to Renews about 7 a.m. on Sunday morning. 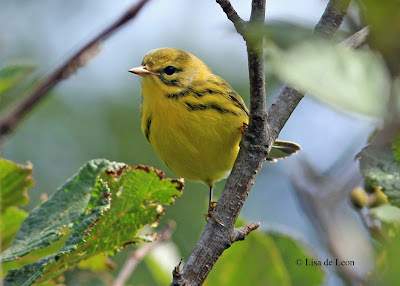 What were the chances that I would see even half of the 11 species reported? Well, "what odds?" I was going to get out and enjoy the day regardless. Even though the Prairie Warbler pictures are posted first, it was actually among the last birds I saw. 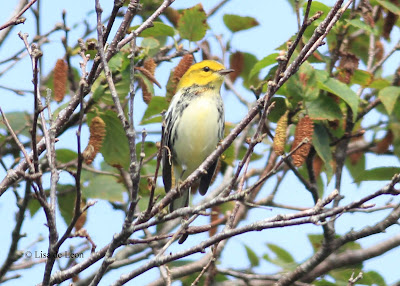 I headed into Bear Cove Road and met a couple from CBS. They had walked up the road and reported things to be very quiet. I wasn't holding out much hope. I drove the first one/third of the road, and it was dead. A few sparrows skirted across the road in front of me and disappeared. I drove on. Finally, I spotted a Yellow-rumped Warbler, a Common Yellowthroat and some Juncos picking in the gravel on the road. This was it. I stopped and began to slowly walk into the area. My first surprise was this Black-throated Green Warbler that flew in. This was the first one I had ever seen on this road. 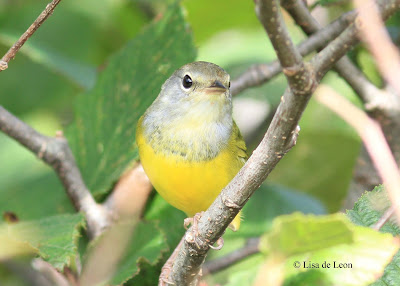 In no time this beautiful Mourning Warbler flew in. By now, there was a flurry of activity around me. A beautiful Magnolia appeared long enough for me to get the binoculars on it, but not the camera. A quick look at a never-seen-before bird made me curious. I got one picture shown last in this series. I stayed in this area for quite a while looking for the Prairie Warbler. It was a no-show, but I was hesitant to move on. Who knew, this might be the only pocket of birds along the road, and I wanted to thoroughly enjoy it.
I felt like the old man from Duck Dynasty - "Happy, happy, happy!" 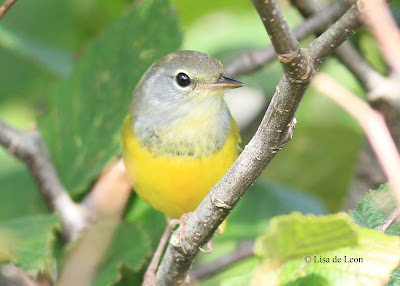 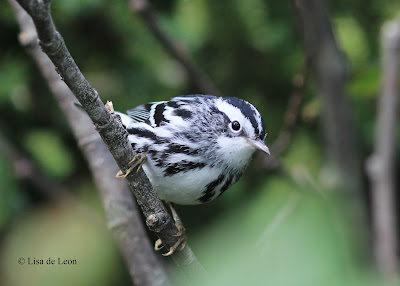 I finally pulled myself away from this area and drove ahead a little further. There were birds everywhere. I decided to sit in the car and see what would come to me. It was a 360 degree show that surrounded me. I took the next several pictures while sitting in my car. 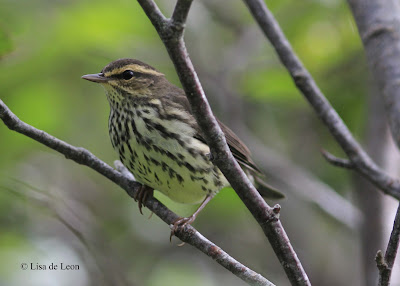 I kept my eyes peeled for the Prairie, but to no avail. In the meantime I was totally entertained by what I was seeing. 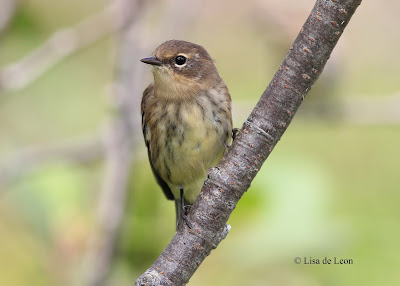 It was a red-letter day! About once a year, I encounter an experience such as this, and it is totally out-of-this-world.

I pulled myself away from the activity time and time again and headed for the Point. Then all of a sudden - no birds! All of the action was in the middle third of the road. When I reached the end, I took a walk down through the trail where I saw a few warblers, but nothing to brag about. Basking in satisfaction with what I had seen, I headed back. By the way, it took me three hours to drive in the short road. That in itself illustrates just how much bird activity there was. 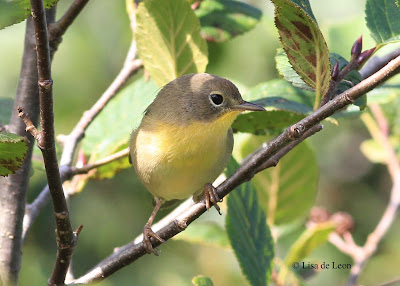 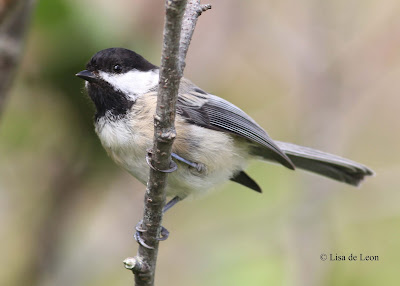 On my drive out, in less than three minutes, I spotted a bird deep within the alders. I was able to get the binoculars on it but not the camera. It was an Alder Flycatcher. Shooting through alders presents impossible obstacles. I waited and watched. Then, in flew a chickadee, then two, then three. Then, there were two Yellow-bellied Flycatchers flying back and forth across the road. I think one of them was a juvenile. 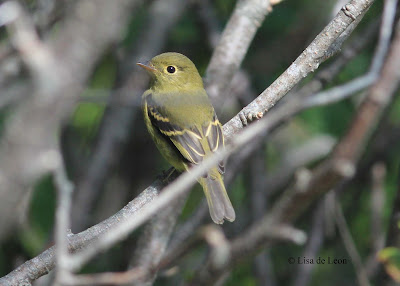 It was then that the Prairie Warbler shown above popped out and sat for about 30 seconds on a branch. There it was - not hanging out with warblers at all! "Happy, Happy, Happy!"
I continued my drive out, by now most of the bird activity had slowed considerably. I did see one very interesting brown bird with what appeared to be a white tip on the tail. However, along came a truck, and I had to back up the road a long way to find room to let it pass. That one got away.
I did find some Juncos and Yellow-rumped Warblers still hanging around. By the time I reached the first third of the road, everything was quiet again. Close to the end, I came across about 10 Savannah Sparrows buzzing about. 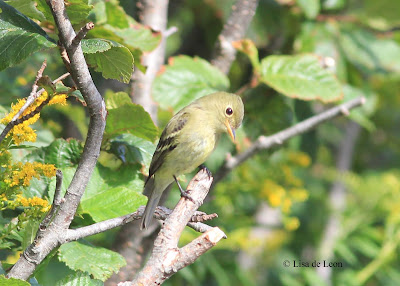 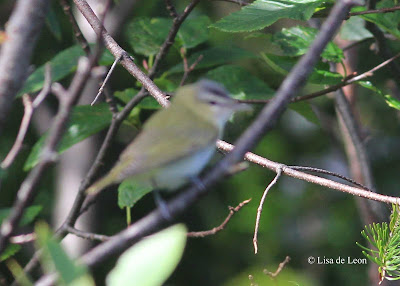 I thought I saw a Red-eyed Vireo on Bear Cove Pt. Road when a slender little bird with a white belly flitted out of the low alders and in - not to be seen again. Not sure about that one, but this one was in the gravel pit opposite Bear Cove Beach. It certainly didn't hang around long. As soon as I saw it, it turned around and flew back into the bushes. There was a lot of activity in this area as well, but the difference was, they were far away, and I couldn't get a good look at them. I suspect there were some really good birds in there that I didn't identify.
Among them was this probable Palm Warbler. If it is determined that is what it is, then I would have seen and identified 13 species of warblers in one day. That is my very highest. I can't help but wonder what I missed. 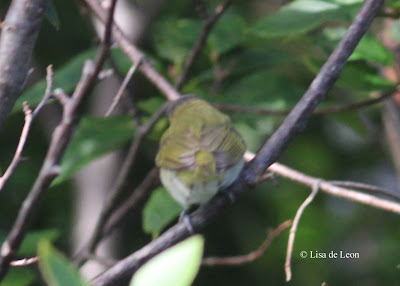 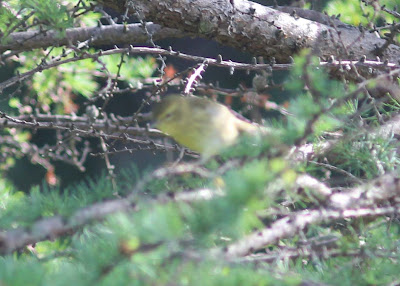 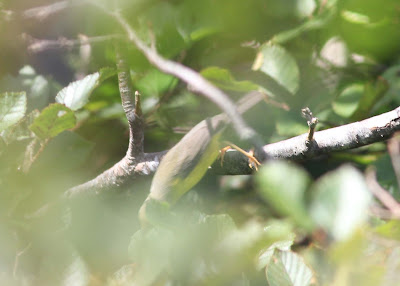 The most unexpected find of the day was this Canada Warbler. It flew into this branch and flew away just as quickly, leaving me with only one picture. It was located in the middle-third of Bear Cove Pt. Road with all of the other warblers.  I can hardly wait until I get another day to head down to the area. Surely, there are more special birds waiting to be identified!
Posted by Lisa de Leon at 9:24 AM