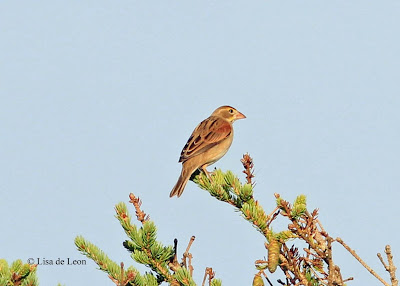 Since I woke up so early yesterday, I decided to take my camera to Cape Spear to try to get some shots of the sunrise. It was a rare calm and warm combination of a day - just the way I like it. Trying to beat the sun to Cape Spear was on my mind, but when I reached Blackhead, I couldn't help but run in to check for birds. It's just habit to do this, I guess, because the day before there was not one single bird in the area. When I drove up the road to the bus turnaround, I didn't see any thing moving. When I reached the turnaround, I spotted a couple of juncos and Yellow-rumped Warblers, so I stayed a while to check it out - there went the photos of the sunrise. After about ten minutes, this Dickcissel popped out of nowhere and sat around for more than five minutes. Where were the other birders? Why aren't they here? 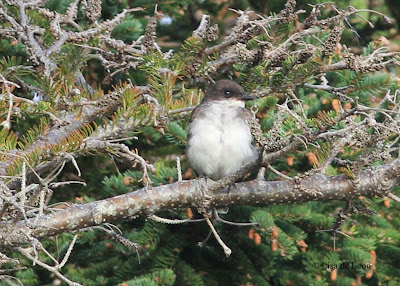 While watching the Dickcissel, I spotted something white beaming in a tree across the way. It was a flycatcher of some sort. It was more important for me to get pictures than it was to look at it with my binoculars. However, what I did see was brown, a rich color of brown. Well, my mind went to some really good flycatchers. All for naught, because it turned out to be an Eastern Kingbird, but why so brown? Maybe it was a juvenile. It was a good bird, because I had chased several reports of Eastern Kingbirds earlier this year and missed them. 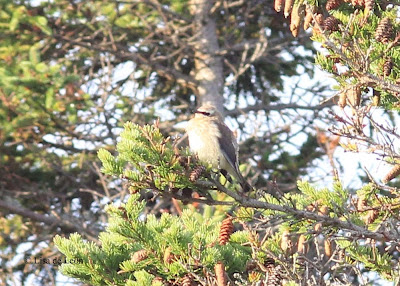 Then, even farther away sat another bright bird looking very much like a Northern Shrike. I understand it is early for shrike to appear, so I began to review my washed out shots. Clearly, there is no shrike beak here. The mask is not well developed, but I think this is a juvenile Cedar Waxwing. Yet, it doesn't look like other juvenile photos I have of waxwings. 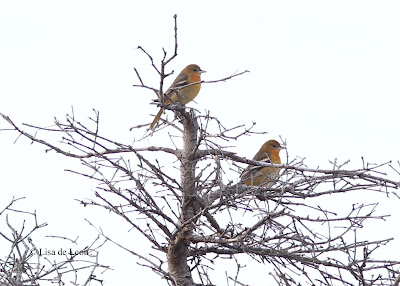 What was going on? All the while I was looking at these special new arrivals to Blackhead, there was a flurry of activity of other birds like Belted Kingfisher, Purple Finch, clusters of warblers, Mourning Doves, Downy Woodpecker, Northern Flickers, Pine Siskin and more. Essentially, there were birds everywhere as I drove back out of the community. Sitting atop a bare tree were these two lightbulb-like Baltimore Orioles. 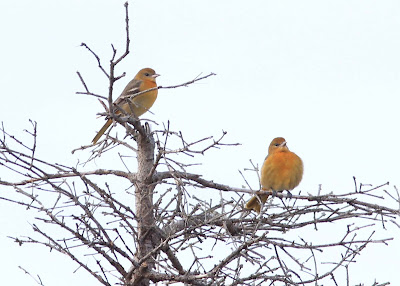 Sparrows - Fox, White-throated and Savannahs were everywhere. What happened over night to bring all of these birds in? 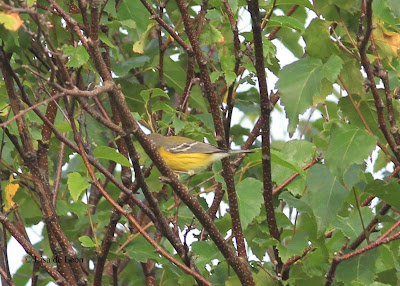 Among the Cedar Waxwings and Orioles, there were warblers flitting about. The only clear shots I got of what appeared to be at least three other little yellow birds were of this juvenile Magnolia Warbler. 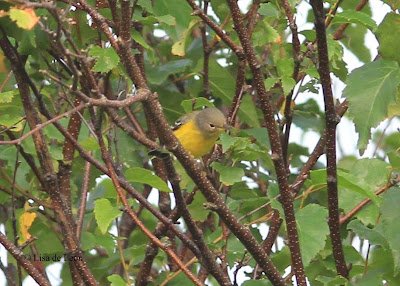 This amazing flurry of activity lasted for more than two hours. This was a rare day when I left my phone at home, and I couldn't even call anyone. Where were the other birders? Well, I learned later there were others on Blackhead Road who hadn't made it to the community yet. Then there was Dave Brown over at Cuckhold's Cove finding a Common Nighthawk and an Ovenbird!

It seems the winds that blew out the last group of warblers, including the Blackburnian, blew in a fresh new batch of birds for us to enjoy.
Posted by Lisa de Leon at 6:04 AM