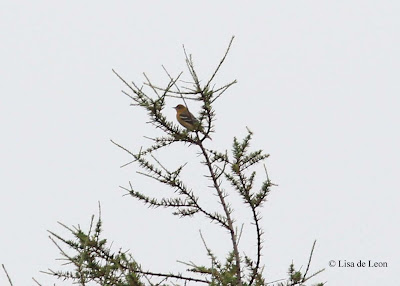 On a recent trip to Central Newfoundland, I decided to take the time to visit practically all of the small communities adjacent to the TCH. Birds aside, it was really special to actually see some of the places I have passed by hundreds of times. When I reached the Fair Haven turn-off, I really was thinking about the cove where the Little Egrets landed earlier in the year. Could the vanishing Glossy Ibis have gone there? Well, when I arrived in Fair Haven, the tide was so high there were no birds at all. Amazed by the number of small birds on the 11 km. drive in, I spent more time on the road in the drizzle checking them out more closely. I saw several species of warblers, but the bird-of-the-day turned out to be this distant Baltimore Oriole. 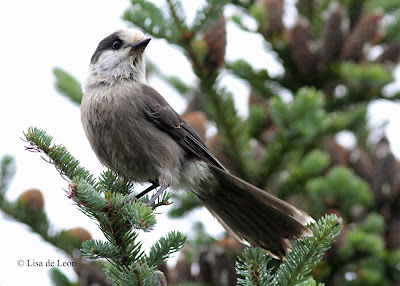 Appropriate for a gray day, a Gray Jay flew in, in fact there were four. This one landed so close I could hardly focus on it. 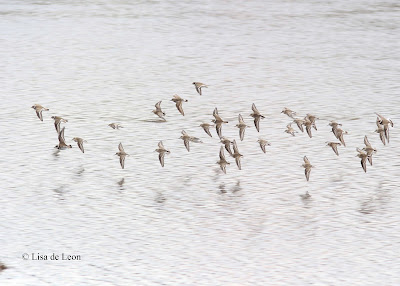 Leaving Fair Haven behind, I crossed the TCH to go to Bellevue Beach. By this time, the drizzle turned to pelting rain. When I reached the beach road, I was surprised to see it had been privatized, and a gate was up blocking the entrance. The gate and the rain were a real deterrents to checking out the beach. I moved on to Arnold's Cove which was quite active with small shore birds. There were plenty of Greater Yellowlegs, at least one Lesser Yellowlegs, and as this picture shows - at least two White-rumped Sandpipers and many Semipalmated Sandpipers and Semipalmated Plovers. The tide seemed high in other areas, but in an inner cover behind Home Hardware, there were open mudflats where these birds were feeding quite close to shore.

The drizzle was letting up, and I headed toward Come-by-Chance via Refinery Road. Then out of nowhere, the sun broke through the clouds, and this great Bald Eagle came close, really close. Soon it moved on, and I began checking the alders along the road. There were many sparrows and common warblers including a Northern Waterthrush, YR-Warblers, one Yellow, four Blackpoll, and two Black and White. American Goldfinch were common along the way, and there were several Golden-crowned Kinglets. One of the best parts of birding Fair Haven and Refinery Road (aside from the abundant birds, of course) was the absence of traffic. There were very few passers-by, making for a peaceful and enjoyable experience. Friday proved to be more of a relaxing holiday than an eventful birding day. 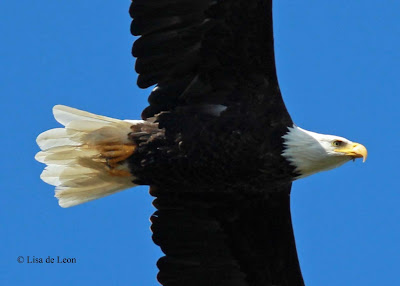