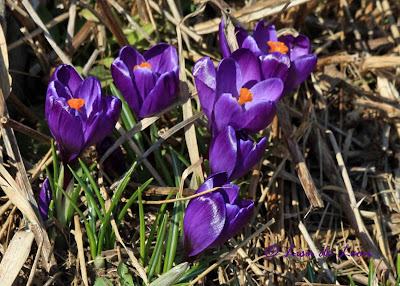 I am no Emily Post but, oddly enough, she did have something to say about the etiquette of bird watching.  There really is a lot to be said about this topic, and I am going to share some of my observations over the last year.

As bird watching is a spectator sport and there is often more than one spectator present, there is a need for a keen awareness and sensitivity to the surroundings and to others.

When I first started going out to look at birds, I began seeing others doing the same thing. I could tell by their binoculars and cameras that they had been at this much longer than I had. It was then that I began to try to learn by observation. Some of the things that I noticed can easily form the basis for a set of "best practices."

1) Demeanor: Speak softly and move slowly when around birds and nesting grounds. The reasons are manifold: a) It is best not to disturb the bird that has such a keen sense of hearing. b) Be sensitive to other bird watchers who just want to soak in the moment and may not want to talk or listen to anything but the sounds of the birds. c) Try not to disturb others who live in the area or who may use an area for other recreational uses. As hard as it is to accept, walking trails were really put there for walking. Bird watching, unfortunately, does not take precedence.

2) Access to property: This is an important consideration. Is a bird on public property, private property or business property? The answers to these questions set up the need to obtain permission prior to entering a privately-owned property. A rare bird does not trump a "no trespassing" sign.

3) Communication: When talking to property owners, each bird watcher has the opportunity to serve as an ambassador for all bird watchers. People will generalize their experience with one birder to apply to all birders. Sometimes property owners become very attached to their special visitor and may become very protective of the bird. This is a normal instinct as it is often due to the caretaking provided that a bird survives. Each situation is different and the key to a successful experience for all is to apply a dash of kindness, a cup of ethics, a cup of common sense and a sprinkle of appreciation. When the bird is known to draw many spectators, double up on the recipe and always be careful to not trample the flowers both literally and figuratively.

4) Sharing: When many birders are viewing birds in a small space or through limited scopes, take a fair share of time to look and then allow others to experience the same enjoyment. It is not uncommon for there to be as many as six birders or more in the same place at the same time. Any bird is going to bolt when it sees that kind of "front" moving toward it.

5)Bird watching first; photography second: All birders should have an opportunity to view a bird in peace prior to the onslaught of shutter snaping. Keeping a distance that is in the best interest of the bird and ensuring the least amount of stress is very important.

6) Cruising: A vast amount of bird watching takes place from the car. Miles upon kilometers are clicking in on the odometers. Every bird watcher knows that it's impossible to see a bird when driving the speed limit. That prompts very slow cruising around the side roads and rural thoroughfares. This likely doesn't sit well with other drivers on the road. One of the most considerate things that a bird watcher can do is to watch for a safe place to pull over and allow the accumulated traffic tailing behind to pass. Bruce McTavish wrote a hilarious list of traffic rules that apply to bird watchers (posted on the Google Discussion Group last year.) Oh, if only those were true. The fact is the rules of the road apply to bird watchers just as they do to all.

7) Spreading the word:  If a bird is on private property, it is best to try to obtain the permission of the property owner before spreading the whereabouts of a bird. Some people are very open to the idea and others are not.

8) Identifying a bird:  It is important that the identification of a bird be accurate. We all make mistakes in IDing a bird and it is not easy, even for long-time birders, sometimes. If in doubt, try to get a picture and ask for help from other birders who may be familiar with the species. The correct identification is particularly important when posting a sighting.

9) Bird lists: A bird list is only as prized as its accuracy. On Sunday, a bird flew in front of my on Portugal Cove Road. I was 80% sure that it was a Rusty Blackbird. I turned around and tried to find the bird again but was out of luck. Unfortunately, 80% doesn't warrant a place on my bird list.

11) Baiting a Bird: There have been instances where food has been placed at a site for the purpose of luring a bird to photograph. This is an interesting scenario. Our feeders in the yards are actually baiting the birds. Yet, it is common knowledge that feeders provide help to the small birds to survive the harsh winter. What is the difference?  A chicken thrown on QV Lake to lure in a Bald Eagle is baiting the bird. Yet, the Bald Eagle that eats that chicken doesn't eat a gull. When is it unethical to bait a bird? I guess that would likely be situational and would beg the question: Is the baiting harming the bird in any way or placing it in harms way? This is an ethical questions that can only be answered one situation at a time.

As bird watchers we are often in the right place and time to offer the bird a safe haven to go on about their natural lives....just as if we weren't there. This is where we can work to limit our own footprint in a place that was not meant to be traversed.
Posted by Lisa de Leon at 2:52 PM