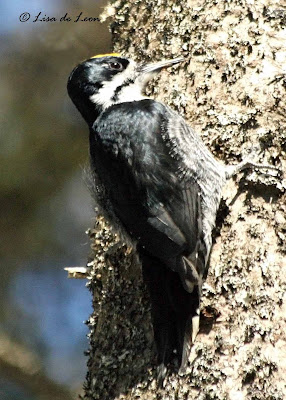 Saturday was an "A" day for me on the birding front. I was drawn to the outdoors by the great sunshine, the Ruddy Duck at QV and the Great Egret.  When the day started the Great Egret was missing in action so I started my day at Quidi Vidi Lake. There, the Ruddy Duck was looking happy and quite at home.  The strong sunbeam flashing on the water was very harsh so I decided that it was useless for me to try any pictures.

I went on to check out a couple of feeders in town but there was nothing special around. It was around 10:30 when I returned home and was going to try to be productive. 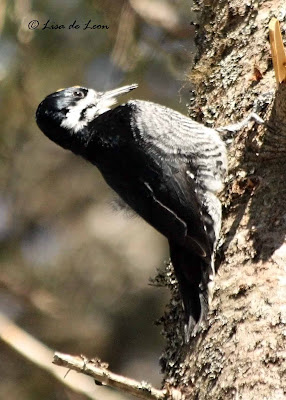 All that productivity went right out the window when I checked the discussion group and noted that someone had spotted the Great Egret at Long Pond. In one big swooping circle, I grabbed my coat and headed right back out. The walk at Long Pond was beautiful and the snow/ice mix was not quite so treacherous as my last trip.

I was sauntering down the trail, scanning the water's edge for the Great Egret and listening for small birds in the trees. I heard a Fox Sparrow in the distance and spotted several Juncos flitting about as well as a Blue Jay. 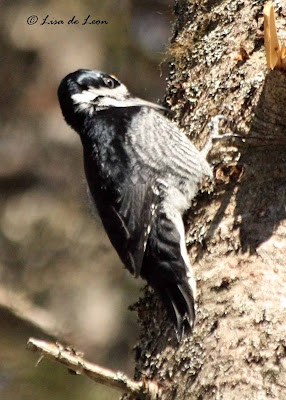 Because of the trail conditions there are not many walkers taking on the risk of a slip and fall so the woods were quiet and the sounds resonated. As I neared the end of the North side of the trail, I heard knocking. I stopped and listened and then followed the sound further up the trail. It had to be a woodpecker. My senses heightened because I have been keen for over a year to see the local woodpeckers. I did see a Downy during the winter and of course, the ever-present Northern Flicker. 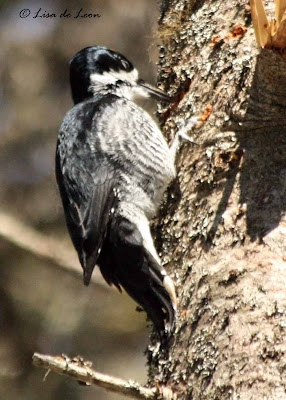 Every time I heard someone say that they saw a ..... woodpecker, any kind, I winced. Now, could it be that I found my own woodpecker?  I followed the hollow sound until I was standing right under it, still on the trail.  I started scanning the trees high above me and I saw a flash of movement. Stepping just feet off the trail I got my first full view of a Black-backed Woodpecker, a male. Needless to say, I was pretty excited.

I followed the postings last year on the Discussion Group and frequently saw that a Black-backed Woodpecker was at Long Pond. I made more than a dozen trips in pursuit but had no luck. Now, for a few moments, I had this great bird all to myself.  It worked its way up the tree then moved to another and then another, never straying more than 10 feet away. It moved from the shadowy south side of the trail to the north side where it glistened in the sunlight. 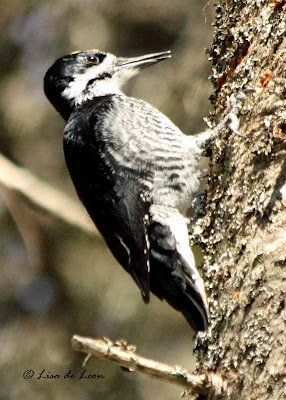 I began shooting, images of course.  Here's the drill:  It would draw its head way back to set up for the next drill, it would then propel its strong head and bill forward until it made contact with the tree and in some instances, it would extract an insect. There were times when bark would fly off the tree after the jack-hammer-like assault. This action happens so quickly that it is hard to catch all of the movement with the naked eye. With the help of the camera it was possible to stop action for review later.

I stayed with this powerhouse for more than a half an hour and was later joined by other photographers who, too, had come to Long Pond in search of the Great Egret. Since I had already enjoyed my private viewing of the Black-backed Woodpecker, I moved on to once again try to see the Great Egret.
Posted by Lisa de Leon at 8:03 AM