Northern Gannet: Courtship on the Rock 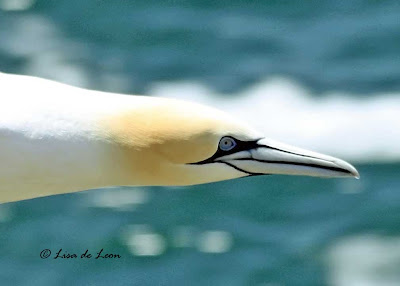 The Northern Gannet is an awesome seabird. I only wish my pictures could capture the real magnificence of this bird. The cliffs and rocks of Cape St. Mary's are amass with thousands of Northern Gannets. While I have many pictures showing the numbers and the sheer frenzy of activity, I have chosen to try to focus on the individual birds and pairs that make up this huge gannetry. 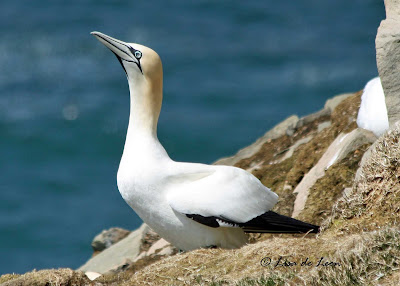 It was a beautiful day to visit these breeding grounds on Newfoundland's south coast. The viewing area is perhaps a kilometer from the parking lot and Interpretative Center, all down hill going in and all up hill going out. The viewing area itself is a natural jut into the sea with no barriers. I often found myself looking down and getting dizzy and queasy. This was often compounded by staring out through my binoculars and camera. It is definitely not a place to allow children to roam freely. It is so easy to get rapt with all of the action that you forget where your feet are. 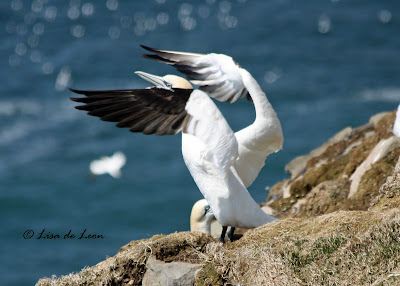 When we first arrived, I found one Northern Gannet by itself. Having been to this site once before, I quickly realized how rare that was so I began to take pictures. Isolating a bird in this setting is really difficult. 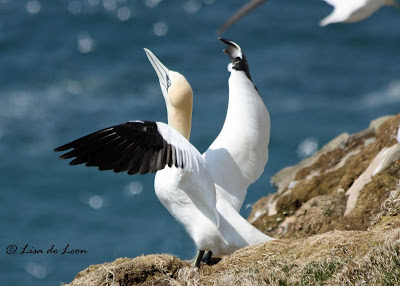 This one almost seemed to be looking for some heavenly direction to pick the right mate. Then again, it may have been giving thanks for the rare day of sunshine. 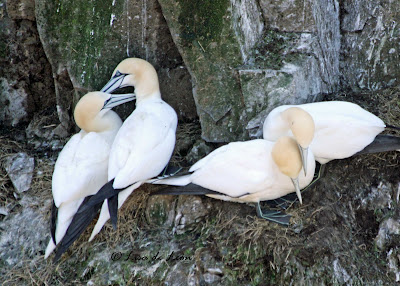 All around there are Northern Gannets that seem to have already paired off.  These birds are monogamous and will pair off for the long term. There is a lot of courtship going on all around. The last time I saw any similar behaviour was in St. Petersburg, Florida during the Spring Break. 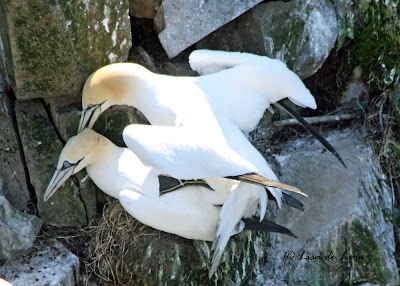 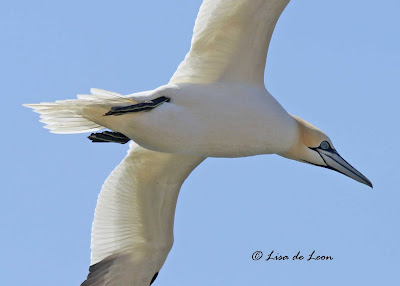 Zoom, Zoom. There is a constant flurry of birds in flight. They fly by so quickly and sometimes, so close that it is a real challenge to try to capture the beauty of this bird in flight. Despite that, the motivation to keep trying is driven by the amazing color, shape and grace of the Northern Gannet. 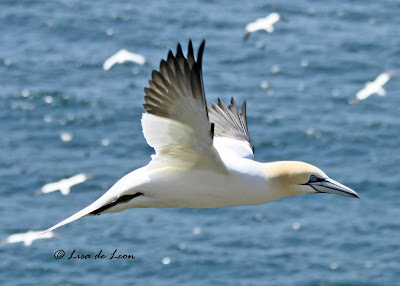 Before I knew it we had spent nearly three hours at the tip caught up in the awesome display of nature that just kept swirling around us. It would be so easy to go and spend an entire day in this area. There were times, many times when I just had to stop and drink in the spectacular show of nature unfolding. While a Fall visit was amazing, I think the combination of other breeding seabirds at this site and the mating activity makes the Spring even better.
Posted by Lisa de Leon at 12:08 PM