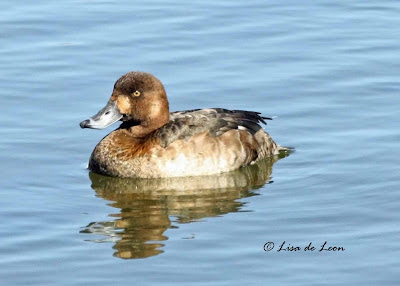 Sometimes there are so many birds in front of me that I don't really take in the full detail of an individual. This was the case, obviously, with the female Greater Scaup. It was a matter of not seeing the forest for the trees, I guess.

Last week I made my daily jaunt to Quidi Vidi Lake. The ice is going out of the ponds now and most of the Tufted Ducks and Scaups have move to other smaller ponds, except for one. There in front of me was one Greater Scaup all by itself.  The head was looking more of a rich brown than I had seen before. The feathers seemed 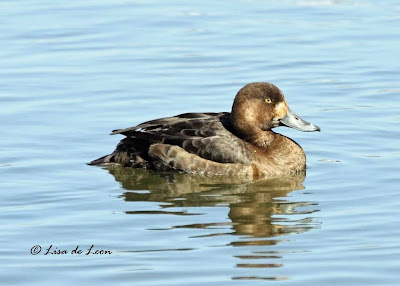 more fluffy than I had seen. The bill seemed larger than usual.

I looked and looked at it wondering if this could be another kind of bird. Well, a flip through all of the bird guides indicated that it had to be a female scaup. The rounded head and larger bill were good indicators that it is a Greater Scaup. To make sure I sent the picture to a birder to confirm. I was wavering between the Greater or Lesser variety but once I applied the descriptors to this little bird, I was sure that it was a Greater Scaup.

The lesson here is I need to take more time and look more closely, even when the birds are plentiful. This one looks like it has spruced up for Spring.  In the meantime when a small duck is all by itself, it is important to look really closely because it could turn out to be something quite different and rare.  In fact one such bird has made a pit stop at QV for the last three days. I will post pictures of it soon.

Rare Drops:  We had some major winds coming up the eastern seaboard late this week and it dropped at least two rare birds in our midst. One of them is a Great Egret, the second one spotted here in the last week. The newest arrival was quite busy moving about yesterday causing birders to scour all possible marshes. It has proven to be elusive.
Posted by Lisa de Leon at 8:12 AM