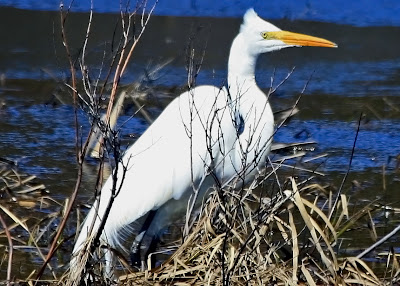 Three Great Egrets on the Avalon in six months! How can this be? Well, anyone who visits here will never forget the force of our winds. On a wing and a prayer and a great big "blow" ... that's how we get so many amazing birds. This one looks out of place and so at home all at the same time. 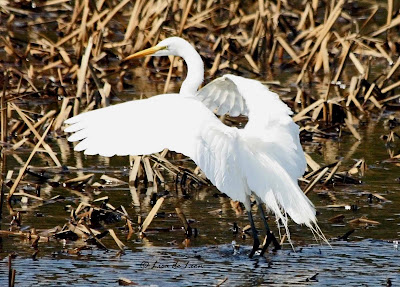 After a late arrival on Thursday, this Great Egret has moved to Long Pond which is an ideal place for it to move around freely, eat its heart content and build its strength for whatever trek it plans in the future.

For the many bird watchers and photographers, Long Pond is also a great place for viewing. In fact, it is possible to sit in the bird blind and watch the spectacular show unfold. It has been overflowing with visitors this week. Better take a chair if you plan to stay. 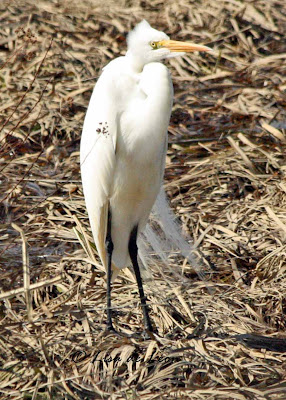 How do you photograph an egret?  There is so much of it and the eye is so tiny compared to the rest. The white reflective, billowy flow of its feathers also present a challenge. However, none of this stopped many of us who lined off on the shoreline to get a glimpse and a shot.

This bird is in its breeding plumage and has a flowing extension of fine feathers trailing behind. It is a rare treat to see. The Great Egret is also something of a contortionist and is very active feeding and flying the length of the pond. I watched today as it lifted off and flew the full length of the pond from West to East. It swooped down in front of a man fishing on the East end. I would have loved to have heard what he said when this large, ghostly bird invaded his space. 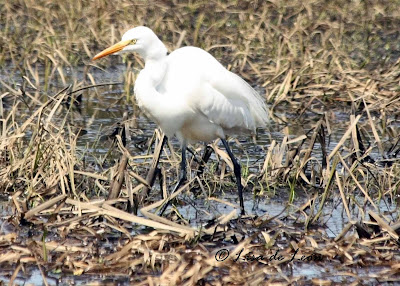 At times the Great Egret looks small as it sets up to spear a small fish. He has to do this quite a lot because the fish are minnow size. He is quite apt at it and doesn't seem to miss once he sets his sights on the small stickleback. 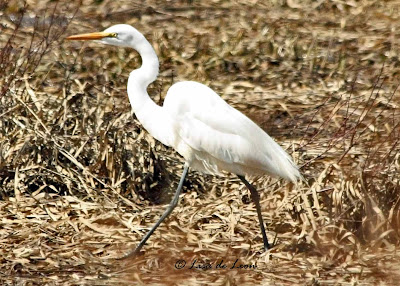 At other times it strikes a more classic pose that is majestic. The many spectators are shaking their heads in admiration and delight to have this visitor in our small, northern city. If anyone needs an excuse to go for a walk around the pond, this great bird is reason enough. It will certainly motivate me to get out for my daily walk. Let's hope it remains a part of the landscape for quite some time. The temps of the last two days have been around 7 to 10 degrees, but it is getting much colder at night. 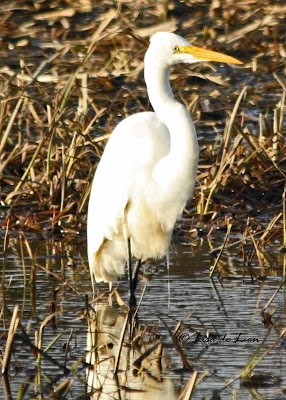 My hard drive is groaning with the load of pictures that I just dumped on it and something tells me that mine is not the only one.  I find myself deleting pictures that only a year ago I would have thought were wonderful. Culling the blurred, fuzzy shots is now a requirement that must be done regularly. I want to save plenty of space for the warblers that will be flying in over the next month or so. 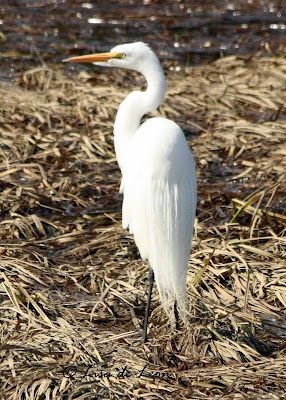 The size of a photo to really show the detail of this bird has to be large. This is one of my favorite poses but in this small picture the eye does not sparkle. However, when it is enlarged, it shows nicely. I know that there are thousands of pictures of this bird popping up on various web sites and on Flicker. It is really interesting to see how other photographers have been able to capture this beauty.
Posted by Lisa de Leon at 7:26 PM