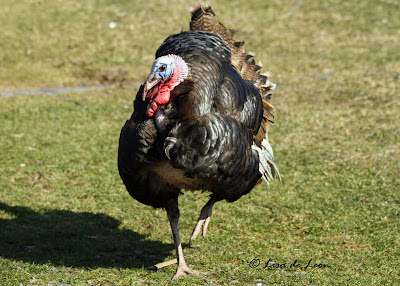 I photographed these Turkeys at a kennel/farm yard in Branch, NL. Driving by it was hard not to see them. The owner says they have had these two turkeys for a long time and like keeping a lot of  barnyard birds for the grandchildren. While this is not my first time to see a turkey, it is the first time since I have taken a real interest in birds. It seemed bigger and more grand than before. 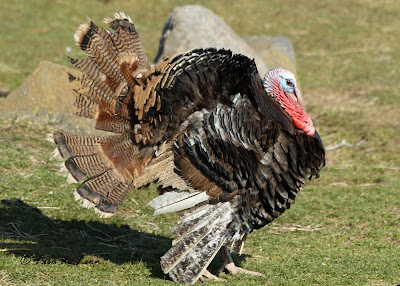 This one looks like it has had a few mishaps along the way but it hasn't dampened its spirit. It spread its feathers and put on quite a show for me.

Wild Turkeys are not native to Newfoundland but have been showing up in the Codroy Valley over recent years. It is a bit of a mystery about how they got here but word is that they are reproducing and becoming more common. Some speculate that they are descendants of domestic turkeys that were released into the wild. However, the ones in Codroy  do not look like this domestic Turkey. I think this is a Broad-breasted Bronze Turkey. 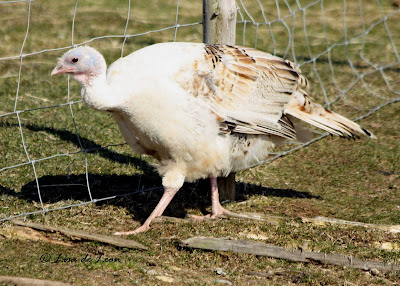 Apparently, the Turkey is only one of two domestic birds originating in the New World (the other is the Muscovy Duck.) These birds were taken by the Europeans from Mexico in around 1500. They have since taken on a special role during holidays all around the world.

This little female was working so hard to find an opening in the fence to move into the field with the male. We were assured that these two turkeys would never make it to the table.