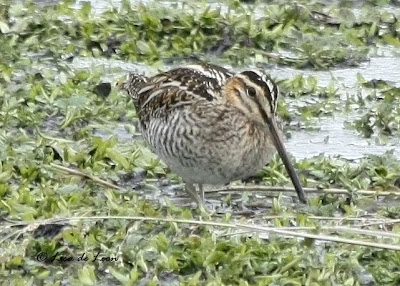 During the late summer and early fall, I lost count of the number of trips that I made to Backline Road in Goulds in an effort to see a Wilson's Snipe. Apparently, there were many there spotted by many people. I am sure that I ticked the residents off by being parked on the side of the road impeding the natural flow of traffic. So 2010 came and went and I never saw a Wilson's Snipe. 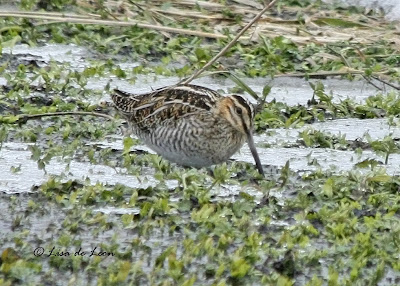 In early January I participated in the Christmas Bird Count in Renews. On a brief walk over a marsh, a Wilson's Snipe flushed. I caught a glimpse of it zigzagging low across the marsh only to disappear and not be seen again. It didn't feel like I saw it at all! 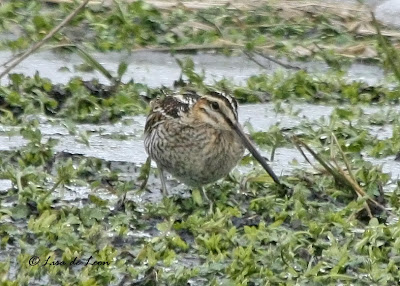 Later in the month another birder and I revisited the place and there was a repeat of action in the exact same place. It is very difficult to see the snipe as they freeze in place when startled until the danger gets too close to them and then they fly, quickly. Now twice I had seen a Wilson's Snipe but not really seen it. 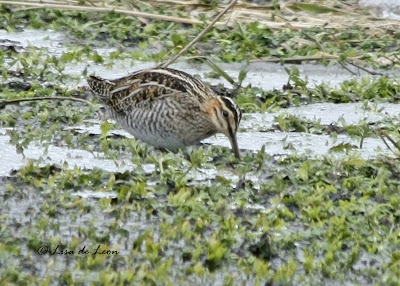 When I saw the post that there was a snipe in Tors Cove, I decided on the spur of the moment to take the drive. Honestly, I didn't expect to see anything because I had come up empty so many times before. When I got to Tors Cove, I began driving around the small community and came upon a very large flock of feeder birds including House Sparrows, American Goldfinch, Black-capped Chickadees, Dark-eyed Juncos and European Starlings. I stopped and began scanning the group with my binoculars to see if there might be any other species among them. 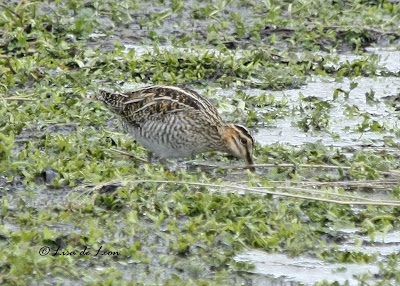 A local resident was walking her dog and looked at me with curiosity as I peered into the backyards with my binoculars. I had to explain that I was looking for unusual birds and that I had heard that there may be a rare bird in the area. She guided me toward where she had seen others looking at a grassy area the day before. I was off to the site very quickly. 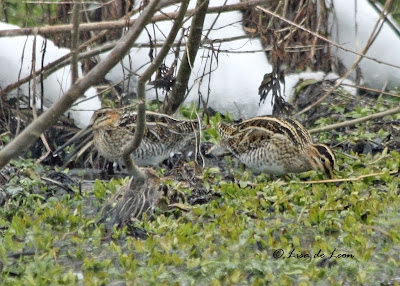 When I arrived I was shocked to see a snipe right out in the open. I eased my car into a looking place and watched. Then to my surprise and delight, I saw a second snipe. I have since learned that one of these birds is a Wilson's Snipe and the other is a Common Snipe, a mega-rarity for Newfoundland. I sent my pictures to a local expert for confirmation. Can you tell the difference? The Common Snipe is on the right. I just read a very thorough and interesting article by Dave Brown on his blog linked from this site describing the history and the difference between these two birds. I wouldn't even begin to try to fully grasp or explain. Please visit his site for some great information.
Posted by Lisa de Leon at 9:40 AM