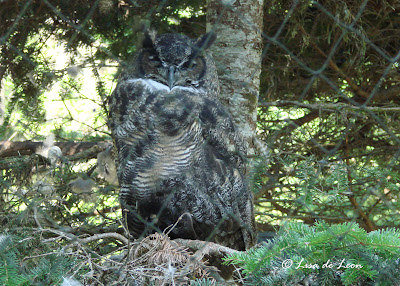 The Long-eared Owl is a nocturnal owl that breads as far NE as Nova Scotia. There have been only or three live sightings in Newfoundland and Labrador. Based on the Discussion Group postings  There was one documented occurrence in Labrador in the Spring of 2005 and before that, one sighting in Conception Bay South in the 1980s where an injured Long-eared Owl showed up.

That makes this owl pictured here a celebrity. In February 2007 this Long-eared Owl was taken to the Wildlife Division in Corner Brook (don't know the circumstances behind its capture) where it was then transported to Samonier Nature Park. It is now a permanent resident there. It is not great to see it caged, but it does a great service by allowing the many children and adults who visit the park to study it closely. My brief research indicates that while this is only the third live Long-eared Owl documented in Newfoundland and Labrador, there apparently was a discovery of a skeleton in the late 1800s. Wouldn't it be great to know the history behind all of the rare birds that come to visit.

Owls are elusive and therefore, very intriguing. I hope to be able to see an owl, any owl, this year.
Posted by Lisa de Leon at 7:20 AM