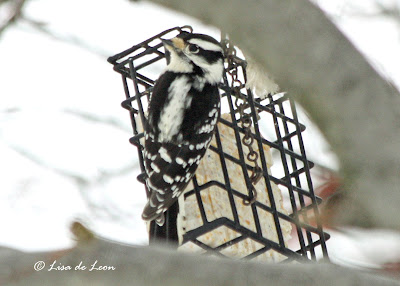 All over this province people who love birds are raising bird feeding colonies in their yards. It is surprising how many and how extensive they are. In just this last month, several of these friends of the birds have contacted Bruce MacTavish of the Evening Telegram to report rare birds frequenting their feeders. It seems that one report leads to another report and so on. There are more rare birds showing up here than ever get reported, I'm sure. 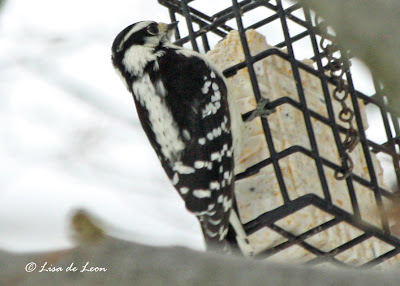 On Sunday past I visited one such yard in St. John's where there are at least 30 feeders and even more bird houses scattered around the yard. It is mesmerizing to watch the hundreds of birds moving in an out - in to get the food and out to avoid the Sharp-shinned Hawk that keeps a close eye on this yard. 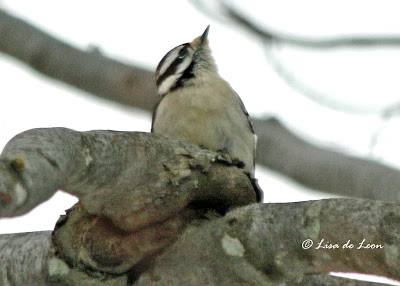 I had a delightful surprise while watching for a flock of Common Grackle to return for breakfast. I spotted this small little bird with just its belly visible looking upward. I couldn't see any markings at first but I trained my attention on it and when it turned sideways, I was so pleased. Up until now, I had never seen a Downy Woodpecker here. There it was, not very far from me. It was so small. 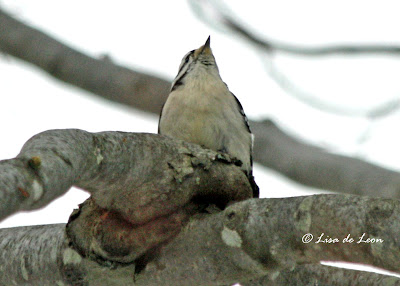 It flew up to the suet cake and had a short feed. The view of it was blocked by a tree, but I patiently waited in the hopes that I could get a clear picture of it. I dared not get out of the car because it would have surely flown away. I waited and finally it turned and showed itself clearly for just a brief moment before it flew off, up a power pole and then gone. It didn't return but I really enjoyed the five minutes or so that it was there. 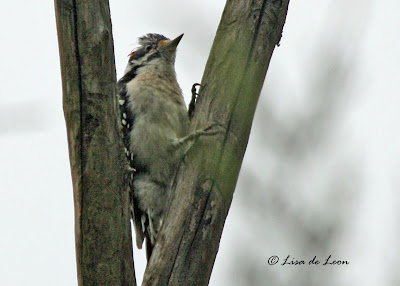 In the summer in Arkansas, I did see a Downy Woodpecker on a couple of occasions but not very close. I have attached this shot of a male Downy taken at that time.
Posted by Lisa de Leon at 8:47 AM