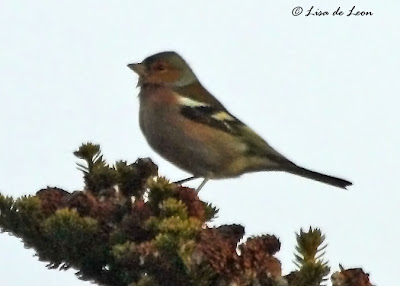 Well, the surprises just keep coming! I had never heard of a Common Chaffinch until last week. When the excited word went out that one had appeared at a feeder in Freshwater, Newfoundland, I began reading. 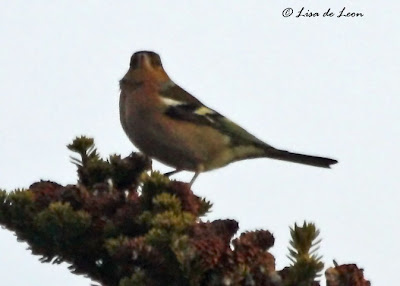 The Common Chaffinch is very common in Europe, maybe the most common finch. However, that is certainly not the case in North America. Many of these birds are exported to N. America as pets and some do escape. That taints many sightings because the bird may be deemed an escapee. Yet, according to Dave Brown, (Newfoundland Birder) there are no such birds imported into Newfoundland. (Check out his blog that is linked from the right side of this page.) 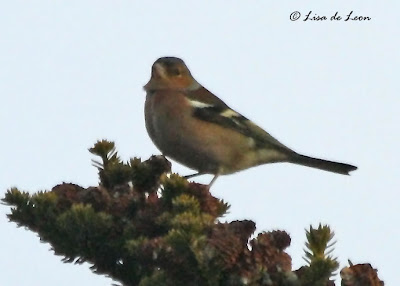 This bird was reported by the homeowners to Bruce MacTavish of the Evening Telegram. In no time a small group of birdwatchers rushed to see the bird.  If bird behaviour is any indication, this bird was not tame. It was much more skittish than the other birds rushing in to eat from the feeder. It was robust and seemed very wild. 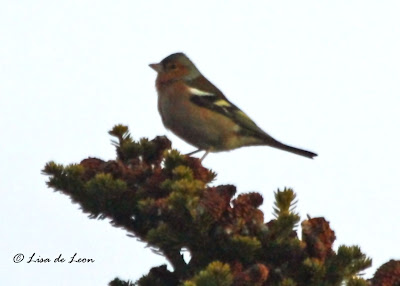 When I travel a good distance to see a rare bird, I try not to get my hopes up too high because the chances are that the bird will not show itself. Yet, my last five trips to see a specific rare bird have been fruitful. The Common Chaffinch showed itself within 30 minutes of our arrival. There is was big as life and even vocalizing. 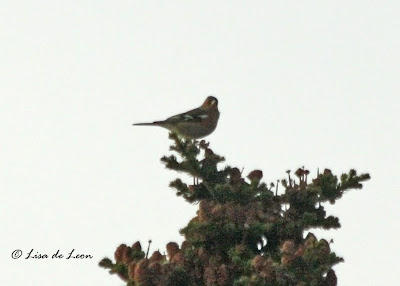 Too bad for me - I set my camera for the conditions around the feeder, thinking that is where it would show up. Well, it fooled me. It went straight for the tops of two trees and I was ill-prepared to get a good picture. It only stayed for about five minutes and there was no time to shoot and adjust settings.  We waited another half an hour for it to return and decided that it was best to move on and reduce the number of people waiting in the yard. We thought it might increase the odds of it returning so that the other birders would have a better chance of getting a glimpse of this very rare bird.
I would like to extend a very special thanks to the Powers in Freshwater who hosted this bird for about one week. They were gracious and helpful during our stakeout. They served coffee and bread and jam to the cold birders who set up on their property. The kindness was appreciated very much.
Posted by Lisa de Leon at 8:29 AM