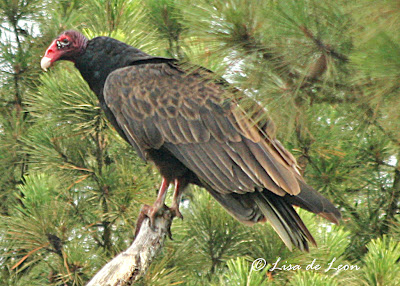 After a long drive from Little Rock to Eureka Springs, my sister and I settled into the hotel, briefly toured the downtown and had a great supper of fried catfish. (My favorite meal!)

We were still restless from being in the car most of the day so we took a short drive out of town to Inspiration Point to get a good look at the scenery. As we were clipping along, out of nowhere, two massive Turkey Vultures lifted off from their evening roadside meal. 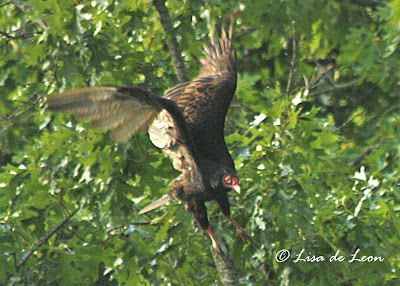 It was startling! The wing span of these birds is almost six feet. Their wings were as wide as the car as they tracked down the road in front of us for a few seconds. Needless to say, I didn't have my camera ready for this show but we were able to stop quickly and wait. It was very likely that they would return to their roadkill once things had settled down.  Sure enough, they reappeared. It was very late evening and the tree-lined roadway was very poorly lighted - the story of my life. Nevertheless, I was able to snap a few pictures. 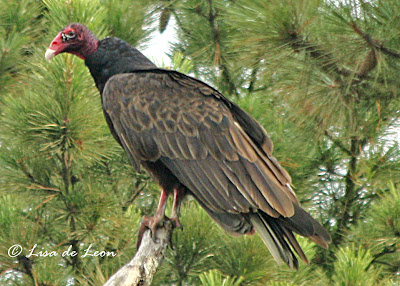 The Turkey Vulture is very common in Arkansas, most often seen in flight. There, it is often called a Buzzard. It was thought that the Turkey Vulture was a member of the raptors like hawks and other birds of prey. However, in 1994, DNA tests revealed that this bird really belongs to the stork family. 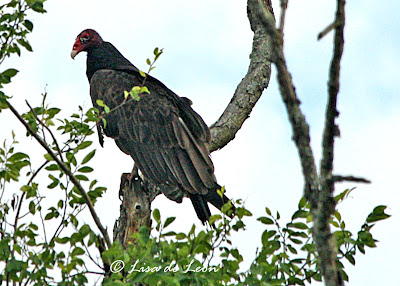 It is one ugly bird. Its head has no feathers and is red and wrinkled with a droopy eye. Yet, the sheer size of this bird held my full attention.  Its beak is white, looks like ivory, with a very sharp and powerful nail at the end of it. With this beak and its talons, the Turkey Vulture can easily tear into any meal. 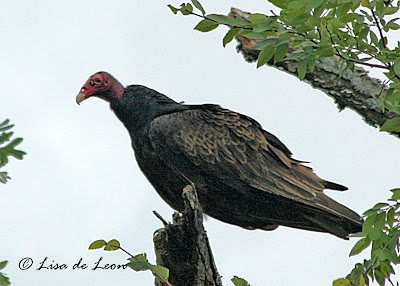 Although this may not be the most handsome bird, when in flight it is graceful and powerful. Despite its size and intimidating look, this bird is tame and will not kill its food. It really serves an important purpose in clearing up discarded carcasses scattered throughout the countryside.

I was hoping to see this bird with my "new" eyes during this trip, and I was not disappointed. Numerous vultures in flight crossed my path, but these two vultures in Eureka Springs were the only ones that I saw up close. It was quite a thrill.
Posted by Lisa de Leon at 9:42 AM