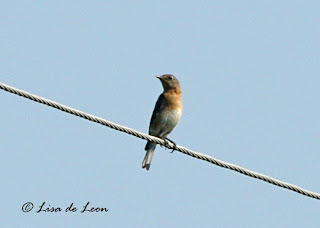 The Eastern Bluebird is a brightly colored and gregarious bird. Although, they are reportedly in decline, I saw bluebirds in at least five different places from Little Rock to Eureka Springs, Arkansas. Unfortunately, none were within close range. 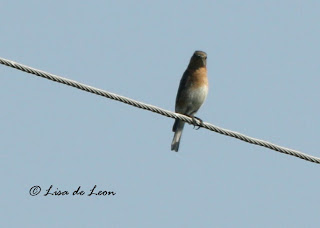 This bird, likely a female, frequented the power line in the neighbor's yard. That neighbor's yard attracted hundreds of birds daily with several feeders, a water supply and tall trees bordering the fence. It would have been so nice to set up my tripod and sit in their yard in order to capture close shots of the many birds. Instead, I leaned over their fence as far as I could and shot upward (as in this case) when necessary. I heard that they are planning to put up a privacy fence inside of the chain link fence. I wonder if I might have had something to do with that decision. 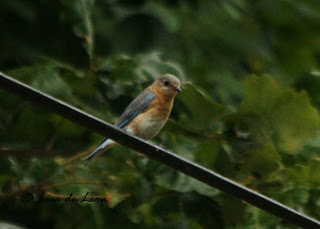 I came across this bluebird in park grounds outside of Eureka Springs. Initially, we stopped to photograph a deer that was contemplating crossing the road. Then, out of the "blue," in flew this bluebird. The settings on my camera were set for the deer, not a bird. When an opportunity comes, I just start clicking in the hopes of catching a shot before the bird flies away. 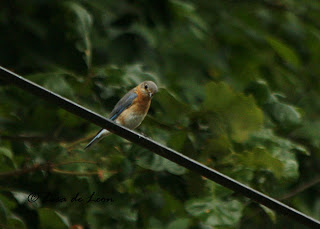 Considering the distance, again, these didn't turn out too bad. Nevertheless, I certainly needed to let more light in. 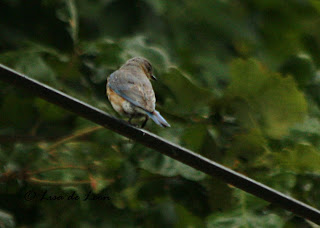 With the amount of brown on this bluebird's back, this is probably a female. The male has much more blue with a brighter color of blue, as well.

Note:  I did get good shots of the deer and will post them along with the caribou and moose shots that I took this summer.

For now, I must give this up and go pick some blueberries. Not much chance that I will find an Eastern Bluebird in the blueberry fields here in Newfoundland.
Posted by Lisa de Leon at 2:46 PM