NOTE:  THIS TEXT WILL NEED TO BE ALTERED AS I JUST REALIZED THAT IT IS A GREEN HERON. 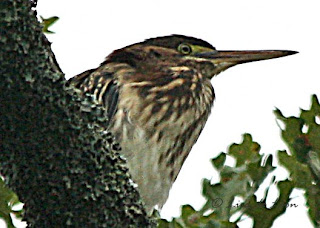 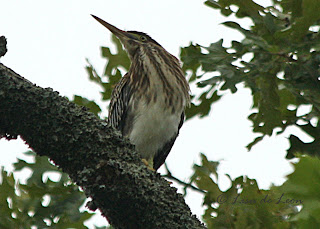 In early Summer, I often heard the strange gulping/gurgling sound at Long Pond. It sounded like a boot had just been plucked from the mud, very strange. I thought it must be a bird because it consistently happened about every 5 minutes. I had no idea what it was. When I ran into another birder at Kent's Pond, I described the sound and he identified the bird as an American Bittern. I researched  the bird and armed with an idea of what it looked like, I returned to Long Pond. Try as I might, I could hear it and narrow in on its location, but I could never see it. Then the bird went away. I figured I had lost all chance of seeing an American Bittern this year.
Well, that was not the case. While in Eureka Springs, Arkansas waiting for a tour boat, I spotted this American Bittern sitting in a tree. It was extremely cooperative, probably because it had two young Bitterns in the area. The American Bittern is typically a migratory bird in Arkansas but this one stayed to breed in the area. 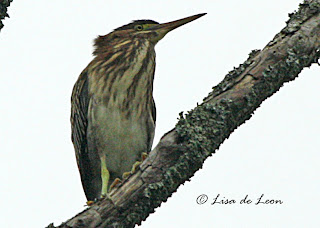 It was a rare opportunity to photograph the Bittern because they tend to stay among the tall grass and reed, making it very difficult to see them. This was the case at Long Pond. It has excellent camouflage with its brown streaks on the breast. When this bird is startled, it does not flush but rather raises its head, straight and high, and stands perfectly still. This enables the bird to blend in naturally with the tall grass and woody surroundings. 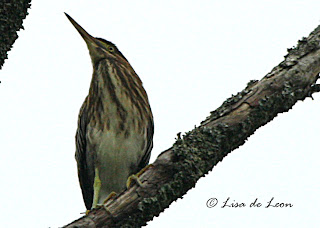 When I was comparing these pictures of the Bittern with other images in the Field Guides and the Internet, I found some discrepancies. Then I began to compare it to the Green Heron, another wading bird. There were striking similarities between the American Bittern and the juvenile Green Heron. I began to doubt my identification of this bird. However, I kept searching the Internet and confirmed that this, indeed, is an American Bittern. 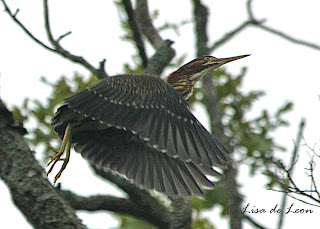 Identification is so difficult, even with what at first seemed a sure thing. However, this is the process of learning. As a result of my self-doubt, I now have a better understanding of both the Bittern and the Green Heron. The study is never wasted.
Posted by Lisa de Leon at 10:54 AM