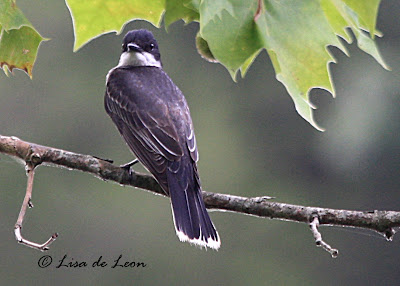 The Eastern Kingbird is a very common bird throughout  North American. On occasion, this bird will show up as a rare visitor in Newfoundland.

This particular bird was photographed in Eureka Springs, where they could be frequently found. There were often several Kingbirds playing together, much like Juncos. They flitted about playing and catching flies. Flycatchers tend to move very quickly. 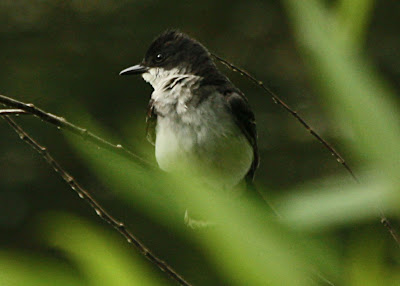 This species is about 8" long and has a 15" wing span. As the above image shows they have several white bars on the edges of the wings and a larger white bar at the end of its tail. 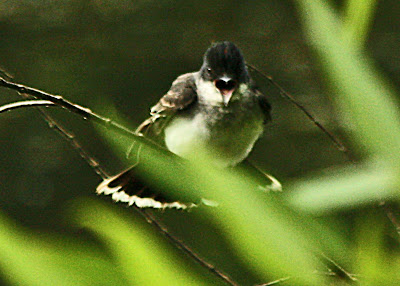 In most cases my presence didn't seem to bother the Eastern Kingbirds.  However, this is the exception. It is possible that I may have gotten near a nest because this little Kingbird became very aggressive. This is a common protective stance when this bird is agitated.  This pose provides a rare glimpse at the red/orange stripe on the crown of its head and a clear view of the flashing white on the tail. This head marking is rarely visible. Maybe it was a temper flush.... 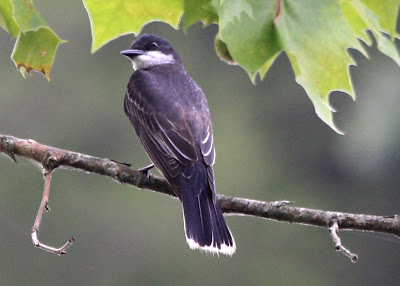 All of these four shots were taken fairly deep in the woods. I say fairly because knowing what slithers around on the floor of the woods and in trees, I am very cautious about going to far in. 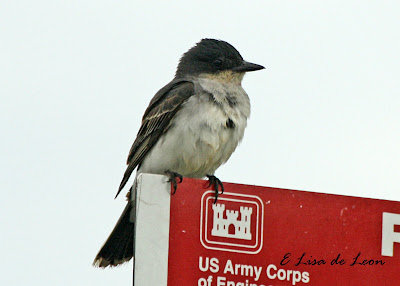 In this shot of the Kingbird there is more brown in the chin area and on the breast. It is quite possible that this may be a juvenile and the brown will molt into the clear white of the adult.  It would be really nice if all birds were as cooperative as this one is for posing.
Posted by Lisa de Leon at 8:16 AM