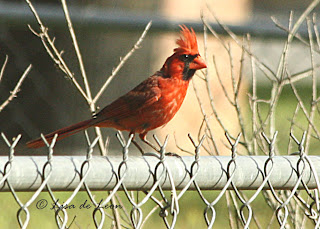 One of my goals of my visit to Arkansas was to get a great photo of the plentiful and beautiful Northern Cardinals. Try as I might for many hours I was not able to get close enough to the bird to get the "great" shot. 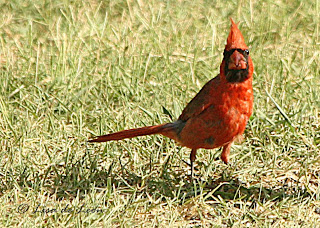 Shooting from a distance of about 40 yards, I captured some nice poses but very poor lighting (either too bright or too dark) and somewhat blurred. It was a disappointment for me but I did get the record shots contained here. 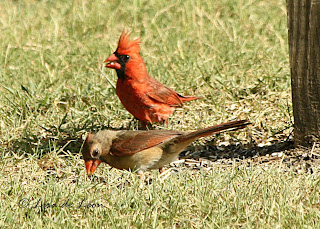 As I observed the Northern Cardinals, I noted that they seem to be family oriented. The pair and their young were often grouped together and they kept a watchful eye out for each other. Perhaps it was because of the presence of the young NCs that they were so skittish and took off any time that I drew near. 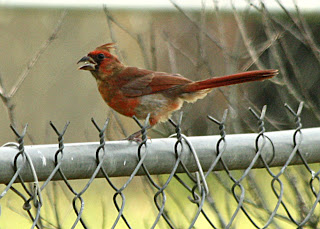 This is one of the juvenile Cardinals that frequented the feeder. This one seems to be a young male. Its markings are similar to the female at this stage but are a little more red. The brown beak is the most important indicator that this is a juvenile. 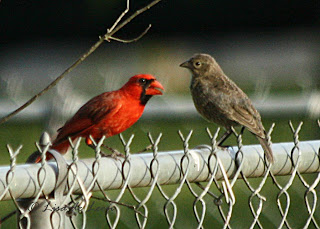 This was an interesting episode that occurred. The Northern Cardinal was feeding this non-cardinal. I finally found a bird that matches the brown one. I believe it is a juvenile Brown-headed Cowbird. Why would a cardinal be feeding the young of another species?  Well, it seems that cowbirds are notorious for laying their eggs in the nests of other birds. They let the other species do all the work and their species continues to thrive. Maybe this juvenile was hatched in a cardinal's nest and raised by cardinals. Nature is very interesting. 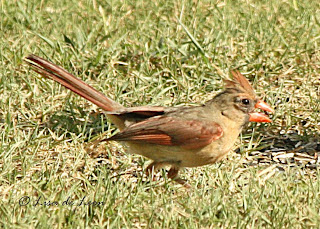 The female of this species also has a crest and the very distinctive bright red beak.

The female was often seen very close to a male who seemed to be watching over her in this shot. The Northern Cardinals were so plentiful and so bright that they lit up the yard with color and activity. 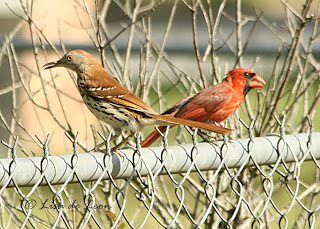 I also noted that the Northern Cardinal is a very social and tolerant bird. It was often seen sharing its fence perch as it is here. I frequently saw the Cardinal with Brown Thrashers (as pictured here), Red-winged Blackbirds, Mourning Doves, House Sparrows and more.

I will just have to wait until my next trip South to get the great photo that I had hoped for.
Posted by Lisa de Leon at 10:36 AM