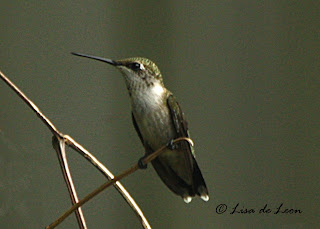 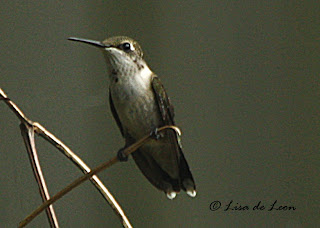 It took hours of shooting to manages these few shots of this small bird. Initially, we had to set up the hummingbird feeder and lure the little ones from the neighbor's yard into my sister's yard. Within 24 hours of hanging the feeder, the hummingbirds began to circle. It was into the third day before they felt comfortable enough to come with someone sitting outside. 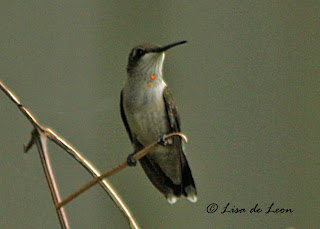 This little one was playing both feeders. The sugar water my sister concocted did not have any red coloring in it while the neighbor's did. This little lady came straight from the other feeder to check out the activity at ours. It still has some drops of red on its breast. 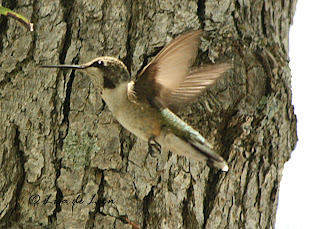 The Ruby-throated Hummingbird has an iridescent color on its back and head. This often impacts the colors that show up in images. At times the back will look very dark green or brown and in other lighting it will appear to be a very light green. 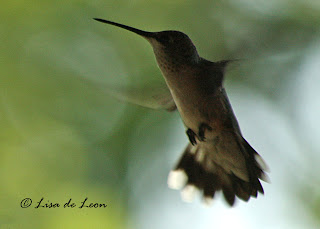 This bird flits everywhere, forwards and backwards. It can beat its wings up to 75 times a second. Think about this. It can hover in one spot for quite some time. The naked eye can't capture an image of the wings when in full motion, a camera lens at the right settings has a better chance. In this image the wings just become a blur. 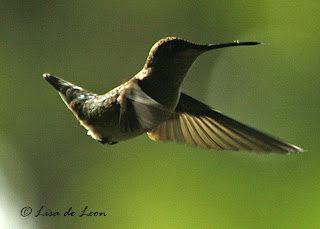 In this image the hummingbird is slowing itself to land on the feeder. It was very difficult to catch any good poses or lighting because the feeder was hanging under the roof of the veranda. I had to catch the bird when I could and hope of fair lighting. I really fought with the settings on my camera in an attempt to overcome this hindrance. 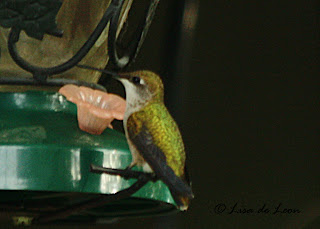 To capture this image I moved out from under the covered area and shot in toward the feeder. The huge, huge trees ensured that the entire yard was in shade around the clock. I pruned some of the limbs back in an attempt to let a little light in but it didn't help much. In this shot the back looks lime green.

I was able to photograph the male of the species in the neighbor's yard (not very clear) but it never ventured into our yard. Next trip, maybe?
Posted by Lisa de Leon at 11:36 AM