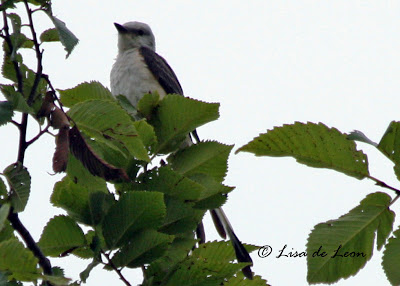 On July 7, prior to taking a boat tour just outside of Eureka Springs, my sister and I made a quick stop at a picnic area. The arm, covered with trees, jutted out into the lake. What a surprise! It was a very "birdy" area.

Initially it was a Killdeer that caught my eye and lured me into this area. Once in, I found many different species of birds, including this Scissor-tailed Flycatcher. 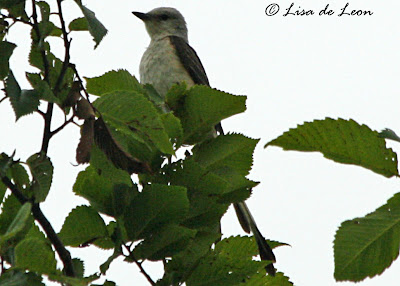 It did take wing several times but only short hops from one tree to another. Try as I might, I could not catch a shot of it in flight. When in flight, the long, scissor-shaped tail is like nothing that I have ever seen before. It was certainly a show-stopper for me.

The Scissor-tailed Flycatcher is found in Northwest Arkansas, areas of Missouri, Oklahoma and Texas. This was my first sighting of this bird, and I was able to see two others fly in front of the car before we ended out stay in Eureka Springs. It is very rare to see this bird outside this area. 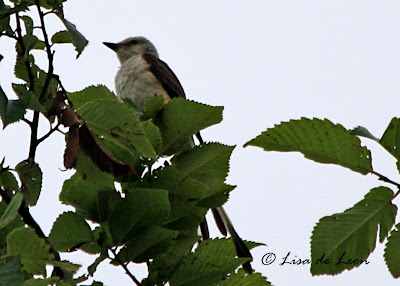 This bird measures 10 to 15 inches from tip of head to the tip of its tail and has a 15 inch wing spread.
Although the Scissor-tailed Flycatcher is supposed to have pink, even hot pink, on its sides and underneath, in this lighting it looks yellow. I was, I guess, lucky to even see that because this special bird was sitting atop a 50' tree covered in leaves. Every time it showed itself, I snapped the shutter like crazy. These three images were the best that I could get.
Posted by Lisa de Leon at 4:24 PM