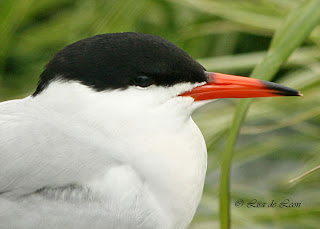 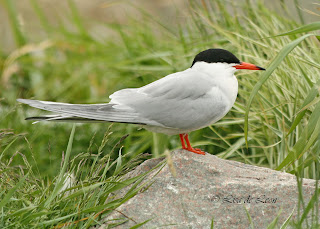 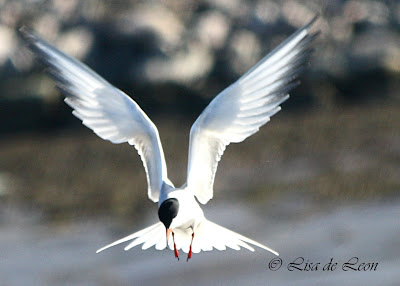 The Common Tern have returned. They can be found in ponds, lakes and around the shore. In the St. John's area I have seen the Common Tern at QV Lake (sitting on a buoy at the West end), in the harbour, at Forest Pond and Maddox Cove beach.

There are three types of terns that frequent Newfoundland and identifying them can be difficult, particularly when they are at a distance. 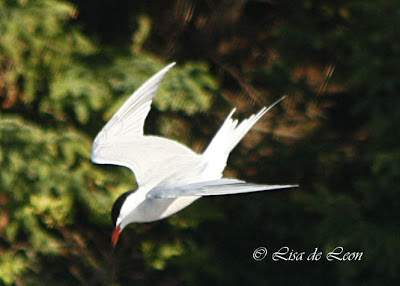 The distinguishing characteristics of a Common Tern, according to the field guides, are: the head and back neck are black; the outer primaries are black as seen in this picture of the spread wings; the legs are red; the bill is a reddish-orange with a black tip at the end; and the tail is forked. They are a little larger than the Artic Tern and have longer legs. It is interesting that they winter on the coast line of South America. 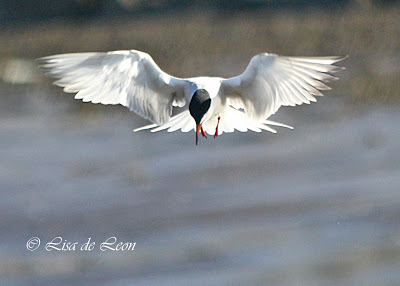 The call of the Common Tern is quite different from seagulls, and they are easy to isolate when among groups of gulls. They will often sit quite low on a rock or buoy that projects out of the water. Pairs seem to stay close together. Their flight patterns are swift and very different from gulls. 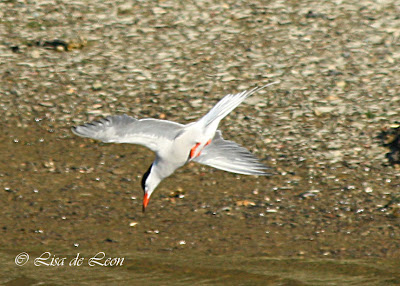 They use their speed to flit all around the fishing grounds. While fishing they hover above the target and wait for the right moment. It is common to see them set up several times before diving for a fish. Their true grace shows when in flight or hovering. When sitting on a rock, they look somewhat awkward and disproportionate. But not when in the air. It is really quite a show.
Once the Common Tern has a bead on its meal, it dives - sleek and straight into the water to snag a fish.
I have yet to see or at least identify the Arctic Tern or the Caspian Tern but I am keeping my eyes open for the different kind. The Arctic Tern has been spotted here by others this year.
Posted by Lisa de Leon at 8:07 AM