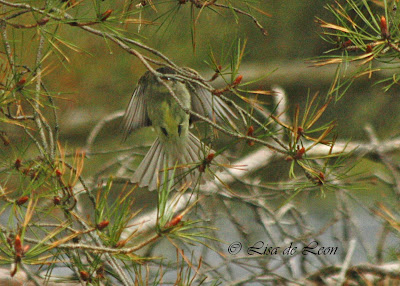 The arrival of the Eastern Wood Peewee brought out all of the birders eager to see this flycatcher that makes an appearance in Newfoundland about once every two or three years. This Peewee was spotted in Goulds among the tall pines. It is likely because of this visitor that many of the other warblers were spotted in the same area. Otherwise, they may have gone unnoticed. 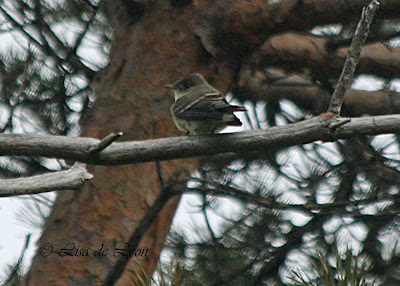 This is one of the most difficult areas to get a good photo. It was very frustrating. When the Peewee would finally show himself in an unobstructed way, it would always be in one of the darkest areas of the heavily overcast sky and tree cover. At any rate I was able to at least get record shots. I was hoping for more. 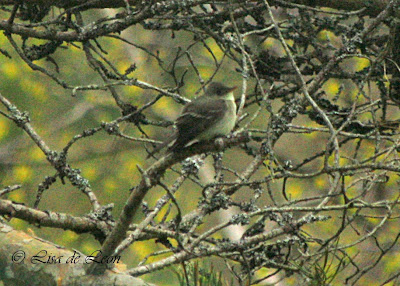 The shape of flycatcher's heads is different from other small birds.  Often their heads appear large for the body and seem to be somewhat flat. The Eastern Wood Peewee has grayish olive color upper parts with a pale underpart tinged with yellow. The beak is dark on the top and yellow-orange on the bottom. It tends to perch in an open area of well-covered trees and fly out briefly to catch insects in the air. 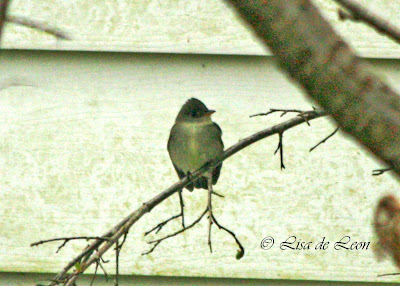 It is one thing to see the bird, it is quite another to get a good photo. That is one of the things that makes this hobby interesting. Unless all the elements come together at the same time, the first time (not likely), I will find myself chasing the bird again and again until I make a suitable digital capture.
Over the next week or so, I will be updating photos on some previously posted birds. As I do I will note these changes in the current postings. Yesterday, I added some shots of the female Yellow-rumped Warbler which I posted in April.
Posted by Lisa de Leon at 9:41 AM