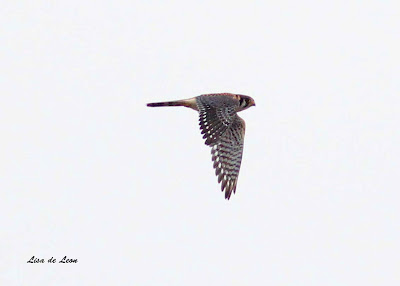 The report of the Gyrfalcon, Snowy Owls and the American Kestrel present on Cape Race road coupled with the ideal weather convinced me to take on the dreaded Drook! 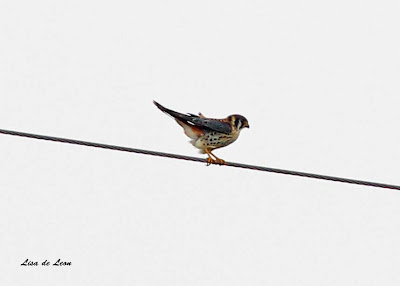 Margie M. and I headed out around 8:30 and arrived at Portugal Cove around 10:30. It is amazing how quick the trip can be by not dallying along the way. Eager to see all of the amazing predators reported on this road, we headed in with excitement. About 10 km in, we came upon the first - the American Kestrel. It was sitting on a wire fairly close to the road, giving us a great opportunity to see it very well. It was a stunning little male, looking very much like someone's escaped pet bird. 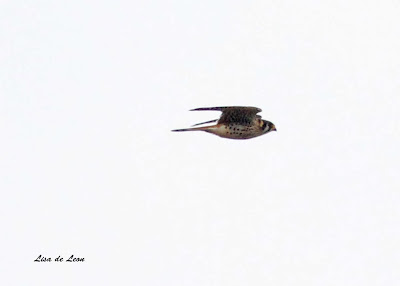 Soon it was off and so were we: One down and two to go. We drove a long way scanning every inch of the roadside. Nothing! Not a bird anywhere, until... far on the horizon over the barrens near Long Beach, I spotted a distant large, dark bird. It disappeared and reappeared behind the mounds. Then, it turned in our direction and flew at a tremendous speed. It was the Gyrfalcon, and I totally underestimated how fast it could travel. 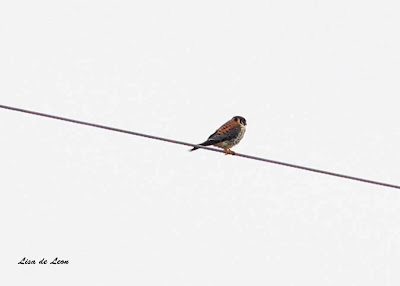 Its path was taking it down over a hill, across the road. Being out of sight for a moment, I hit the accelerator to try to catch up with it. Once again, we caught sight of it, zooming across the road and behind a cliff on the seaside near Long Beach. What just happened? I didn't get once single, discernible shot. We sat for a moment, somewhat stunned and half expecting the Gyrfalcon to show itself one more time. It was not to be. 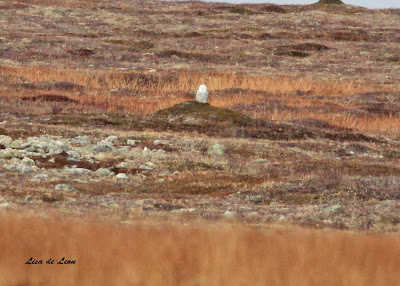 Reluctantly, we decided to drive out to the Cape and hope for another chance to see it on the return trip. Two down and one to go. We had not seen a single Snowy Owl. That was surprising, since eight were reported the day before. We reached Cape Race, still missing our last bird. We turned around to start the 24km drive out, still hopeful. We got out at Long Beach and walked to the shore. Sandpipers greeted us, and one singled, odd-shaped bird sat on a distant rock. I couldn't get any shot to identify that one. There was no sign of the Gyrfalcon. We piled back into the car and drove on. It was Margie who first spotted the snowy- white spot on the barrens. We stopped, took a look and indeed, we saw a Snowy Owl. Never mind it was at least a km. away from us. 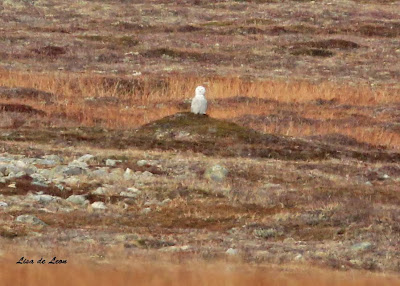 We looked and looked and enjoyed what we could see. Less than a km. up the road, we spotted another sitting atop a high rock on the seaside. It was equally as far away, sitting in worse lighting conditions. Two Snowy Owls - there were no more.

There were so many loons and grebes on the water it was impossible to count them. Many Long-tailed Ducks were also visible all along the shore. When we reached The Drook, we found one Pied-billed Grebe sitting in the freshwater next to the cabin in the area. That was an unexpected bonus.

And so, after four hours driving the road, we saw all three target predators, leaving us wanting for longer, better views of each one.
Oh, yes... there were about 20 Snow Buntings along the early part of the road on the drive in, but they were not around on the return trip.
Posted by Lisa de Leon at 7:47 AM