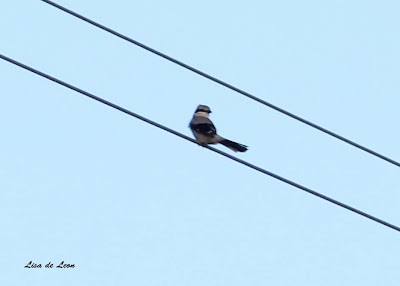 Pouch Cove is an area that is probably "under-birded." I try to travel the area every three or four weeks, and find it to be quite active with much potential for great birds. Of the rarities in and around the area that I can recall, there was the White-winged Dove and White-eyed Vireo. A Gray Catbird was also reported last year. I regularly find Mourning Doves, House Sparrows, hundreds of European Starlings and American Goldfinch. Recently, I happened into a flurry of activity behind the Lion's Club. I saw a flash of a brilliant yellow/orange color on a bird in the area that I concluded must have been a Baltimore Oriole. However, I couldn't even get a sense of size before the bird was gone. There was so much activity on that day in that area that I suspect there were some really good birds there that I missed. It is hard to take it all in with only one set of eyes. 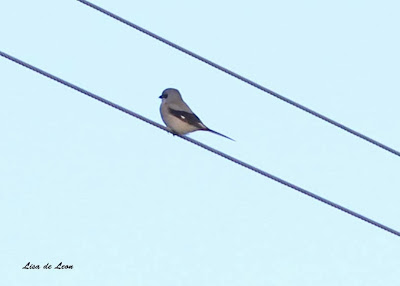 The community is always "birdy" and is well worth the trip.  Incidentally, two years ago, Bauline Line extension (which I travel on my way to Pouch Cove) was bustling with finch. There were so many White-winged Crossbill munching on cones, it was possible to hear the cracking of seeds as I drove down the road. I sized up the crop of cones on that road this week, and it isn't great. I keep hoping the crossbills will return to the area. 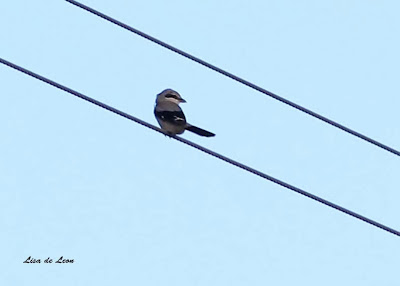 This week after two days of crazy winds, I decided to check out Pouch Cove and area. Hoping for some exotic flycatcher, I was scanning all of the power lines. When I drove down the road toward the Lion's Club, I spotted something in the school yard. I could tell it was gray, and it was flicking its tail a lot! I stopped and managed to get these few shots from a distance. When I inched into the parking lot to get a better look at this Northern Shrike, it flew high and far into the woods behind the school. It is a good bird to see, but the excitement that builds when I spot an unknown, potentially-rare bird is really indescribable. This shrike was the best bird of my day.
Posted by Lisa de Leon at 7:38 AM