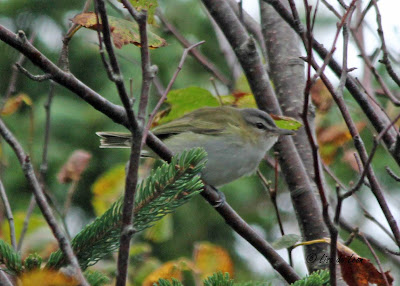 By mid-October in Newfoundland, small woodland birds become scarce.  That makes it even more exciting to happen upon an uncommon one. Strolling up and down Blackhead Road near Cape Spear, dodging traffic and watching for a familiar flick of a branch, is commonplace from early August to the end of October. That stroll yields many special birds.  It was in that location that I saw my first Red-eyed Vireo and several, thereafter. 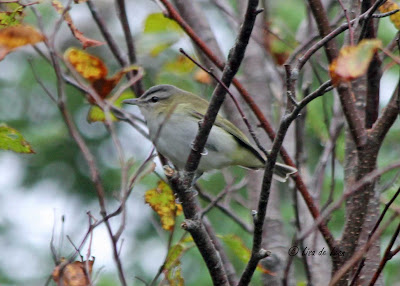 I can't really describe what it feels like to find a great little bird like this, but it makes time stand still. The experience crowds out thoughts of anything else and thrusts me into the moment.

Eagerly studying the movement of the branches, I was rewarded this day when one of the last Red-eyed Vireos popped out in the open where I could see it.

This little bird wasn't as bright as others that I saw earlier. Perhaps it was due to the overcast day or perhaps it was just a normal part of its transitioning into winter. It isn't possible to see the red eye in these shots, and I understand that a juvenile does not yet have a red eye. That might also account for its dull colors.

For me, all of the questions do not pop into my head as I see the bird in a flash, but only come to me when I study the pictures after the fact. For sure, I will read up on this bird before the season next year so that I can attempt to identify young and old on the spot.

As the days lengthen, so does my anticipation of what is to come.
Posted by Lisa de Leon at 7:48 AM