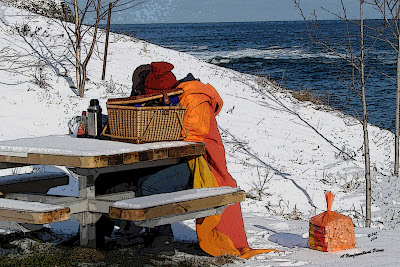 Winter is walloping the Avalon!  My time is not so much my own these days and to further complicate matters, the snow just keeps coming.

How does that impact my time?  Well, it would have been great to be able to go birding last Saturday, but it turned into another day of heavy snow. I could have used the time to put my house in order but in anticipation of a call that would take me out into the storm, I had to clear the driveway four times during the day! What a waste of time!

There was a Lincoln's Sparrow reported at Kelly's Brook on Sunday.  Monday is a very busy day for me and I couldn't make it over. Then, came yesterday!  A blinding snow storm of 21cm blasted St. John's again.  When I got home in the late afternoon (it took an hour to make at 10 minute drive), I planned to plow right through the snow in the driveway and leave my car floating in it. When I rounded the bend to see my driveway, I was shocked!  The snow was almost as high as my car.  I just sat and laughed because I didn't know what else to do.  I parked on the side of the road and hurried in to change into my snow-clearing clothes and took it on!

We cleared only enough to get the car into the garage. That took about an hour in the blinding storm.  After supper I went out to properly clear the driveway and that took another hour. By 8:30 along came the plow and out we went again to remove the huge wall of snow that the city put back into the end of my driveway.  That took 30 minutes.  When time is already scarce, spending 2.5 hours of the day to shovel and blow snow it just too much!

Now, this morning when I awoke, I looked out and there is another 3' x 3' x 12' wall at the end of the driveway again!  Here I sit dreading going out in the cold morning to take it on, but it is inevitable, and I will go out in a few minutes.

I checked the forecast for the next ten days and what should I see but more and more snow in the future!  Today is shot, and I don't think I will get over to see the Lincoln's and more snow is coming tomorrow followed by a possible "monster" storm on Saturday. Will the Lincoln's survive?  Will I be able to get through the deep snow to see it?  I'll put my snowshoes in the car and hope that an opportunity arises before Saturday's dumping.

When an amount of snow is predicted in our area, my driveway fills up with double or triple that amount due to drifting.  I wonder if I will even dig out by Monday!