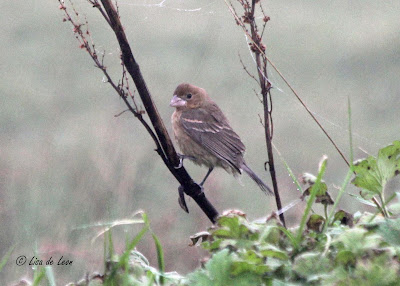 I really hoped that when I saw a Blue Grosbeak it would be blue. However, when the bird is a rare visitor to the area, I was happy to see what I did. 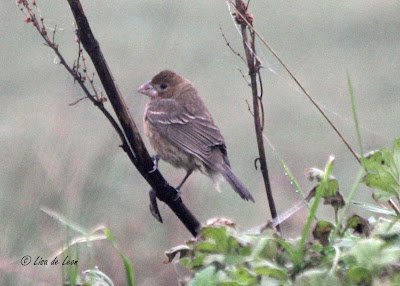 There had been a couple of sightings on Bear Cove Point Road in September, and I tried but never saw one there. These shots were taken on October 16 and 17, 2011. 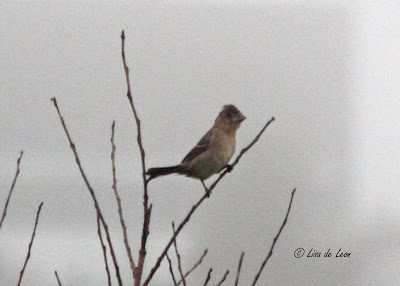 On a special opportunity in October two other birders and I headed to the Southern Shore for a whole day of birding.  The weather was extremely foggy but it wasn't too cold and nothing was going to damper our enthusiasm.  We stopped at several locations on the way down and finally reached Portugal Cove South. 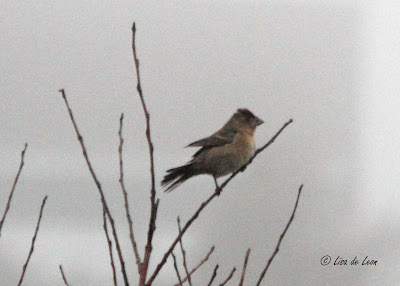 It was there that we saw our first Blue Grosbeak through the mist and fog. It certainly wasn't blue but exciting, nonetheless. We watched it for quite a while as it was visiting a feeder. It was quite a sight, all three of us craneing to see it and fine tuning our binoculars through the waves of fog.  Every now and then we could get a clear view.

We continued our trip down the shore where we learned there was another Blue Grosbeak hiding in the grass near a brook.  We began a walk down the path coming at it from both ends when we flushed the bird. Up she comes and flies into a tree across the road.  We stepped up the pace in pursuit, and I was able to get these shots. 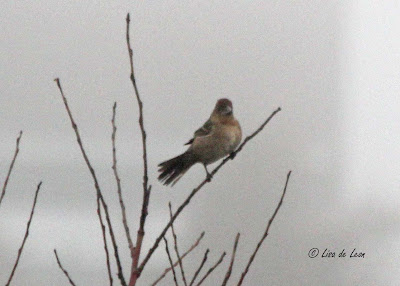 The very next day I drove to the community of Blackhead where I came upon a mixed flock of woodland birds.  There were so many birds and several species and I hardly knew where to look. The birds were clustered in a field some distance from the road and I had to get closer. 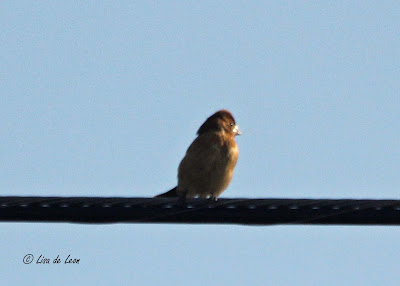 In less than one minute I sank into the marsh!  Oh, well, once wet it is hard to get wetter so I carried on. Out of nowhere, this Blue Grosbeak flew up to a wire quite close to me. It hardly looked like the shadowy figure we saw the day before. 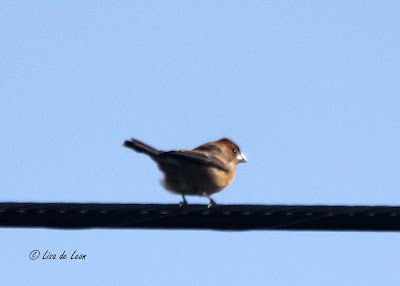 Yet, I was sure that it was a Blue Grosbeak because of the flicking tail and the large silvery beak.  I tried to get closer and get a better picture when it lifted off and flew to the woods. 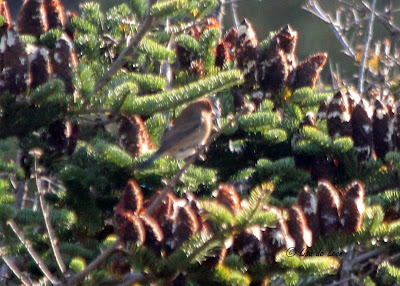 No longer afraid of getting wet, I followed and got only one picture of it in the tree before it vanished. Wow! I had never seen a Blue Grosbeak and now in less than 24 hours, I saw three! Two missions remain:  See a BLUE Grosbeak and get some decent pictures.
Posted by Lisa de Leon at 12:14 PM