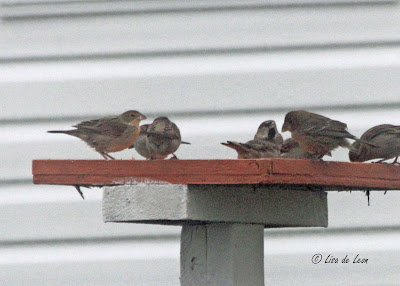 On that same foggy, misty day in the middle of October that I saw my first Blue Grosbeak, I also saw my one and only Dickcissel for 2011. They were dining together, along with a large flock of House Sparrows. 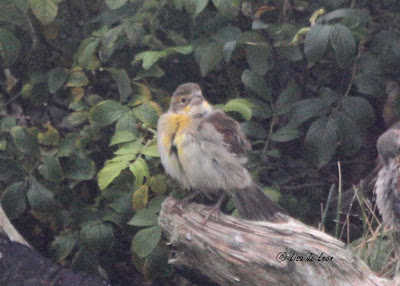 Not wanting to disturb the special visitors, we stayed in the car to look and take these pictures. Thee was a fine wall of gray mist between me and my target but that didn't stop me from recording the event. 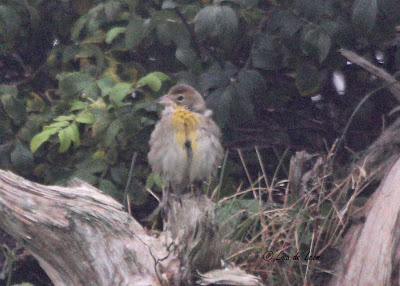 This bird is really out of its range but according to multiple reports on the discussion group, they find their way here regularly. This is the third Dickcissel that I have seen in two years and two of the three were on the Southern Shore.  The other one showed up at a feeder in Portugal Cove. All of them were found in the fall which fits with their migration. 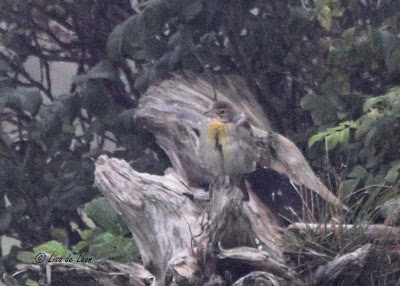 Sometimes when a rare visitor shows up in one place, it will return to a nearby location in future years. For instance, last year a Northern Mockingbird showed up and stayed in a yard by Rennie's River for a long time last winter.  This year a Northern Mockingbird showed up less than 5 minutes from that same location, but this one disappeared, only to reappear about six weeks later just a block or two away from the original sighting. This one continues to be on the move as it has not been seen in more than three weeks.

A similar series of events happened with the appearance of a Yellow-breasted Chat. One was spotted last year where it stayed at a feeder for quite a while before it disappeared. This year, only a five minute drive away, another one has appeared. This one, like the mockingbird, is restless and won't stay in one place very long.

Are these the same birds returning or are they new birds who just happened to land in a close location?  All of these questions that I have make be think that banding and tracking is a great idea.

Not having all of the answers really adds to the appreciation birding.
Posted by Lisa de Leon at 6:07 PM