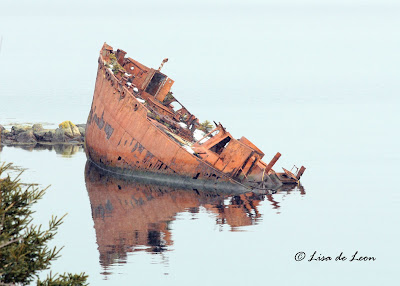 While birdwatching  is really my passion, I always get a thrill when I come upon a treasure from the past, totally unexpectedly.  This was certainly the case with the SS Sposa rising above the water line in Bacon Cove, Newfoundland.

Last week a birding friend and I were scouring the Avalon North. We took a side trip to Kitchuses, a first for me. I trustingly put my faith in her knowledge of the area and drove on as per her directions. We climbed uphill and rounded a bend and there in Conception Harbour sat this great old 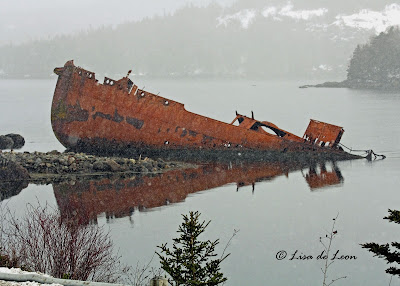 Automatically, my foot hit the brake and I pulled into the first available driveway. Only half off the road in a tricky location, I quickly took a couple of shots. In less than two minutes the conditions went from somewhat bright to a wall of fine snow falling between me and the target. Due to the precarious parking spot, I didn't have time to wait out the minor squall. I took in a deep breath and wondered about the story associated with this old ship.

I have since learned that the SS Sposa was one of a fleet of five whaling vessels, that formed the last of the largest whaling flotillas to hunt the waters off Newfoundland. Two other whalers (SS Southern Chief and SS Southern Foam)  rest in the waters off Bacon Cove. When the whaling industry died, so did the need for these ships.  These ships were owned by Captain J. Borgen and initially were destined to be dismantled for scrap metal. Three of the five ships were brought into this harbour. It was then decided to sink the vessels in deeper water. Two were hauled offshore and, indeed, sunk. While the SS Sposa was awaiting its turn, a storm hit the area and sank it in its place. It has been a part of the landscape ever since. It is proffered that this happened around 1964. Some residents love the wreckage for its historical significance of a time when whaling was very much a part of Newfoundland culture (although not this particular community) and others think it is an eyesore and should be removed.

While I saw no extraordinary birds on this drive, I did delve into a history of this province that I know very little about. There are tour groups in Newfoundland who provide diving tours to many of the shipwrecks that fill the waters around the coastlines of Newfoundland, including this one.  There is even a Geo caching event that takes place around these sunken ships.

This island in the North Atlantic is forever a treasure trove for birdwatchers, historians, divers, archaeologists, geologists, scientists, photographers, campers and people who just want to step out of time and embrace the beauty and intrigue of yesteryear.

Source of Information: Scratching The Surface: The Story of the Conception Harbour Ship Wrecks and the Last Whaler By Dennis Flynn  (This is a great article and can be "googled.")

Note:  Please see the comment attached by a relative of the Captain of the ship.

Link to my new post on this topic: http://retiringwithlisadeleon.blogspot.ca/2013/10/conception-bay-harbour-sunken-ship.html

There was some underwater research completed in the summer of 2013 that seems to change everything. VOCM reported the following story on their web site on October 21, 2013.

"A decades-old shipwreck mystery in Conception Harbour has officially been solved. For years, books, magazines, and newspaper accounts of the whaling wrecks have attributed contradictory names to the vessels. But now, the Shipwreck Preservation Society of Newfoundland and Labrador say they can set the record straight. Neil Burgess says through the 1960s, five whaling ships frequented Conception Harbour. Two he says were towed away, and three sunk at the wharf. The confusion surrounded which ones were which. Burgess says through underwater measurements and design details, they were able to make the match.

The vessels are about 120-130 feet long and which, for the most part, have been stripped of all their monetary worth. The study of the shipwrecks this summer was part of a larger project of the town to develop adventure tourism facilities. Burgess says for divers the wrecks are easy to get to because they are in shallow water close to a roadway. He says the vessels are in remarkably good shape given their age. For example, the masts are still intact, and the cabins can still be seen."

This article begs the question: Where were the other two towed and was one of them the S.S. Sposa?