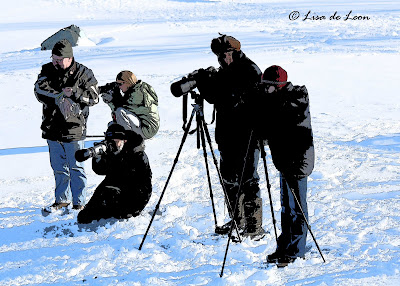 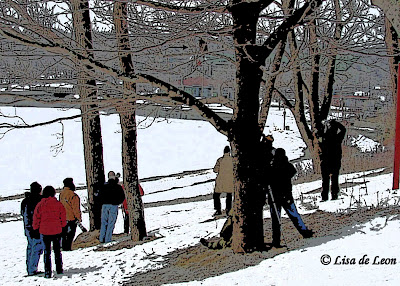 Who are bird watchers? I don't think I ever really gave it any thought until now. Like many, what few thoughts I had on the subject were colored by stereotypical images of bird watchers portrayed through the media. Bird watchers seemed to be somewhat "nerdy" individuals filled with a lot of minute information that didn't seem mainstream.

When I developed an interest in watching birds as a way to integrate walking and the outdoors into my day-to-day life, the last thing that I expected to happen was to meet people.

Then one day last winter when I was standing and watching a mixed flock of small birds feed at Long Pond, a lovely lady and her son approached me and began to talk. They knew a lot more about birds than I did and asked me if I had seen the Red-breasted Nuthatch at the west end of the pond. I found it comforting to meet others who also were interested in birds and who were so willing to share information about birds.

My second encounter with a group of birders took place when I joined a tour to go to the Southern Shore. I listened a lot and found the mixed group of young and more mature to be extremely interesting and knowledgeable. On that trip I learned that bird watching is more than just watching and enjoying these small creatures. I found that the more you know, the more enjoyable the experience.  My stereotypical pre-conception was beginning to break down. There was not one nerd among them.

I have since met numerous birders who live in St. John's as well as around the province and even some who have come from out of province to enjoy the amazing collection of rarities that drop in on Newfoundland. I have found them to be of all ages, very well educated, extremely welcoming to newcomers into the fold and very helpful.

Having spent many years conducting psychological assessments and interpreting results, I began wondering: What are the common traits among all of these people from such diverse backgrounds. I also recognized the great value of integrating a leisure activity of passion into a life that is already seemingly full with work and family. Life can be and is often teeming with "stressors." This really needs to be counter-balanced with an activity that transports the mind into a stress-free zone. I guess this is probably the case with many diversions but never have I experienced such a freeing distraction as bird watching. Surrounded by the sights and sounds of nature and the anticipation of what is before me or what might appear, I think of nothing else but the moment. Is this the case for all bird watchers?  Is this one of the universal draws for bird watchers across the spectrum or is it just a perk associated with the very healthy activity?

I find it interesting that there seem to be no psychological assessment tools to help people identify leisure activities that will be satisfying and meet the needs of individuals. There is an over-abundance of personality assessment instruments designed to match interest with work. Why is there no tool for measuring interests, ability and achievement to match people with hobbies that will be rewarding, fulfilling and a good "fit" for people.

Kurt Lewin, a social psychologist, developed a theory grounded in the importance of personality, interpersonal conflict and situational variables. His theory suggests that the brain gets filled up with all of the things going on in our lives and that when one aspect of life takes on greater significance at any given time, the brain space allotted to that area of life grows, somewhat squeezing out the space of other things in life. Hence, individual become "pre-occupied" and unable to regain balance.  Lewin also proposed that behaviour is a result of an interaction between the individual and the environment.  With this brief overview of this theory, and if you buy into it, it seems very important that each individual have an "outlet" environment where positive waves are reclaiming their rightful "brain space." I'm sure that many psychologist would scoff at what I am suggesting: Bird watching can serve as a panacea for much of what ails the mind.

Another theorist, Jullian Rotter, developed a theory relating to Locus of Control which in short suggests that people's behaviour can be influenced by factors from within (Internal Locus of Control) or by factors from without (External Locus of Control). While he talks about both motivators, he really suggests that individual who are able to blend both Internal and External motivators into their life are among the healthiest. How does this factor into bird watching? Well, I am suggesting that when the tentacles of external factors begin to take over an excessive amount of  Life Space (Lewin), that bird watching offers a means by which an individual can step away from external influences and seek the balance (and peace of mind) offered by a bird watching foray. These ideas just skim the surface but I believe warrant a whole body of study to determine how to conduct assessments to point people toward positive leisure activities that will have a significant influence on mental and physical health.

Without going too deeply into the topic, I think what I am trying to say is that when young people undergo a battery of career assessment testing, they should also be provided with information that will satisfy their need for a healthy leisure activity to round out their life. In addition I believe that no person should retire without also having their interests assessed to guide them into an activity that will rekindle joy, develop enthusiasm and find an exciting reason to get up each day and go out to take part in those things that make them happy such as bird watching or other activities. Over the years, old interests fade and new ones evolve. I am sure way too many go through life never finding their "bird watching" experience.