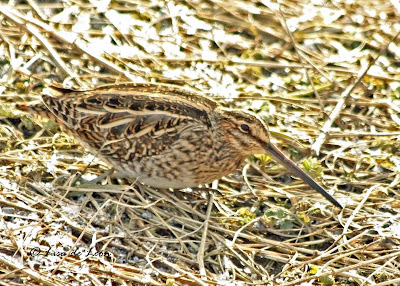 I recently had the pleasure of joining one of Dave Brown's Southern Shore Bird Tours. As usual it was a productive and learning experience. Among the birds we saw were three snipe. So, I guess we were "snipers" sniping out the very well camouflaged snipe. Sniping is used here in the very positive sense of the word, not attacking someone or their ideas. Did you know that sniping is a word now being used by e-bay relating to sniping an auction. Don't think that is a very positive connotation. 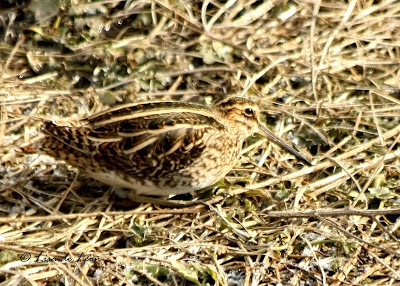 The first two pictures here show a Wilson's Snipe very near the road around Ferryland. This bird has been seen before and was just sitting and waiting for us. I have to admit I was the last to discern it as it blended in so well with its surroundings and as it hunkered down to stay absolutely still when we arrived. As it became more comfortable with the car's presence, it began to move about. 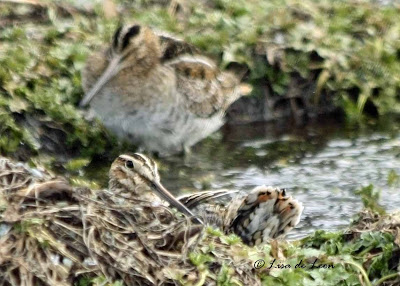 Later in the day we came upon these two snipe in Renews. While on the Christmas Bird Count in Renews, we flushed a snipe in the same area and once again or a return trip. However, because these birds are so fast, I really didn't see it then. 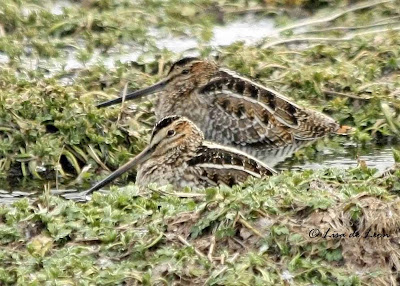 Well, on this day these two snipe were feeding in a trench and did become very still for quite some time but relatively quickly, they settled back down into their feeding and preening routine. We watched them closely and noted a clear difference between them. However, it was impossible to accurately identify them without seeing the underside of the wings. 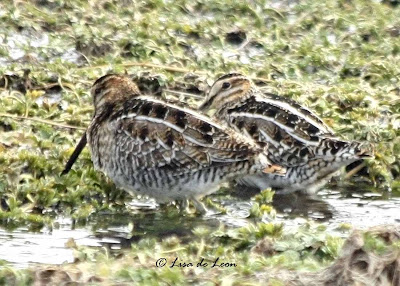 Is it possible that one is a Wilson's and the other is a Common Snipe? We considered the odds to be quite high because there have been a number of the rare Common Snipe spotted in recent weeks. Yet, without the good look there was no definitive ID. We returned to the spot later in the day in the hopes of getting the crucial look but given the short amount of time we had to dedicate to looking, we were unable to detect the distinct difference. 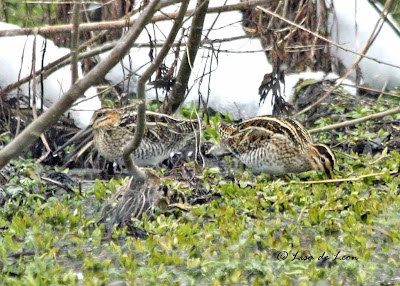 I have added this last picture of the two snipe found earlier this year in Tor's Cove. The Common Snipe in this location was accurately identified and documented by Dave Brown. Visit his site for the detailed description. It is excellent. When I look at the two pairs of birds (one pair from Tor's Cove and the other from Renews), they look the same. Is it possible that the pair that dissappeared from Tor's Cove moved to Renews?  This is a puzzle for a dedicated sniper to figure out.
Posted by Lisa de Leon at 8:10 AM