Birding from the Car 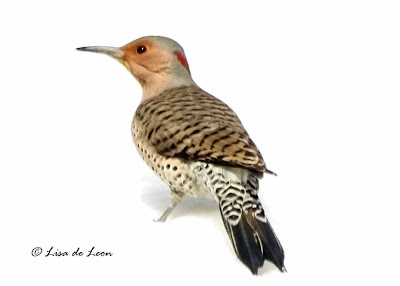 I have been feeling somewhat under the weather for the last week, and it has hampered my birding efforts as well as everything else. I have managed to fit some birding in during this time but limited my activity to what was close by and what I could photograph from the car.

I have also dedicated some time to working through my accumulated pictures and have selected a collections of some of the better pictures taken during this time to share today. 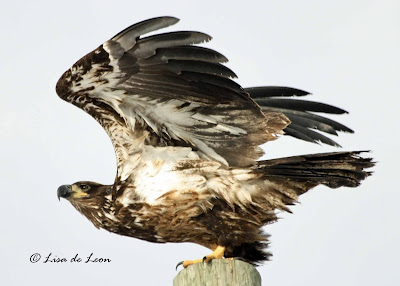 This winter there have been many Northern Flickers. Hardly a day goes by when I don't see one. When I photographed the one above, there were three in a group on a rooftop. This bird is so stunning, and I feel like I have never really captured its beauty. This is one of my better shots of this bird, and I really like the flicker surrounded by the clean snow. 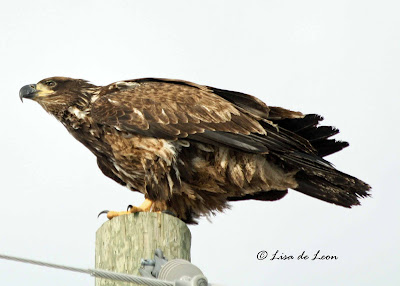 By luck I came across this juvenile Bald Eagle at QV Lake standing atop a power pole. I had about ten minutes tops to see what pictures that I could produce of this huge bird. The Bald Eagle is extremely cognizant of all of its surroundings, and it rotated continuously around this post looking for its prey. It didn't seem bothered at all by the numerous onlookers and photographers. 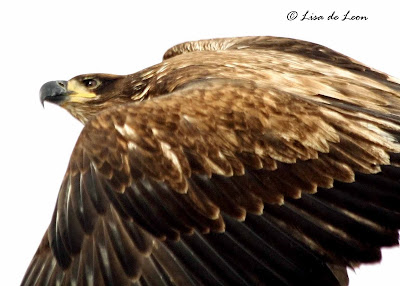 I really enjoy watching raptors as they just radiate power and confidence. These eagles at the lake are an annual attraction for photographers and birders alike. They regularly scour the lake looking for any carcass that may be lying on the ice in the lake. Occasionally, as I saw last week, the eagle will chase a seagull. I caught sight of this event last Sunday but by the time I tried to get near them and stop, the event was over. No matter how often the Bald Eagles show up, the walkers will stop, stand and stare until the the bird moves on. 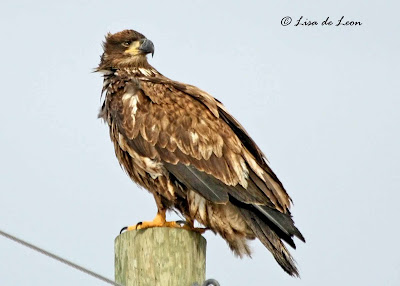 I have been watching for an adult Bald Eagle all winter in the hopes that I might catch a ten minute session with one. So far that hasn't happened and the chances are diminishing as the ice begins to melt out of the lake. 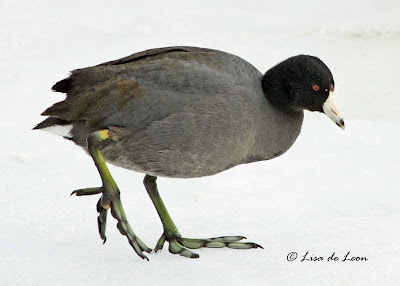 At one point during the Winter six American Coots were spotted at QV Lake where they wintered. Some seem to have already left the area. As the temp warms up it is likely that they will all move on. 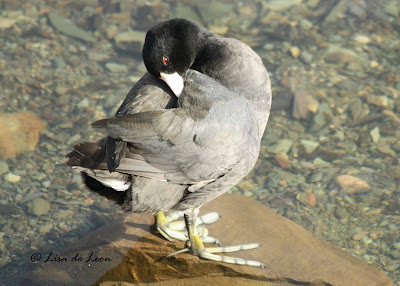 In the meantime they have provided many hours of entertainment because of their unique look and behaviour. They bob as they move through the water, they actually run on the water to lift off into flight, they walk around like chickens on the shoreline and have become much more comfortable with people over the months. 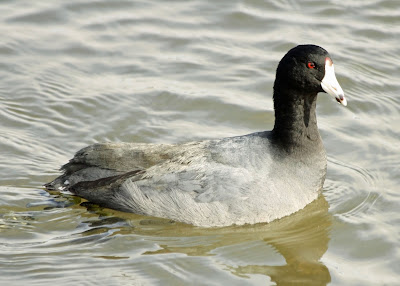 This is the third year in a row that I am aware of that American Coots have come to stay at the lake. I can't help but wonder if it is the same birds returning or if it is a new crop each year. Only banding would reveal that. One thing for sure, they are hardy and are able to survive some severe blasts of weather. We have had a fair share of that this year. 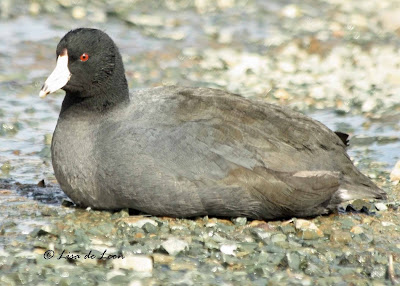 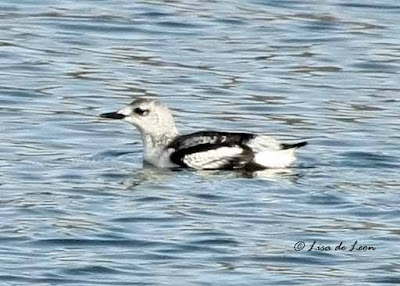 About a week ago I took a drive to Flatrock and area. On my return trip I stopped into Torbay Beach. There I found five Black Guillemot that were clearly molting out of their winter plumage into their breeding plumage. It is very difficult to photograph this bird because it will immediately turn away from people and begin to drift farther and farther offshore. I was lucky to get even this poor shot of one that just wasn't quick enough to escape my lens. 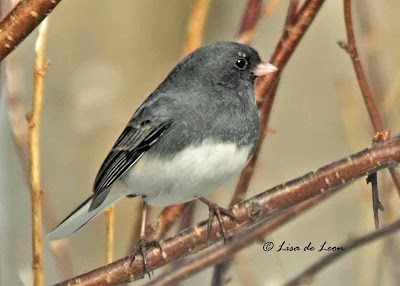 Even more than the Northern Flicker the Dark-eyed Junco is a constant on every birding outing and in my backyard. Yet, I really don't have any good pictures of this quick little bird. It displays great flashes of white when it flies. 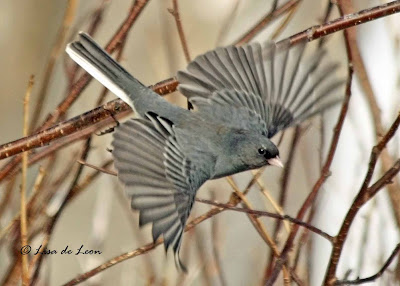 While testing my camera settings on this bird I shot both of these images without much intent of getting a good picture. I was pleasantly surprised when I downloaded the pictures and found two quite clear shots. This certainly motivates me to not overlook those great little birds that are around us all the time. I will work harder to do them justice.

I have a few more pictures yet to post and then I will have to drive out of town to look for new birds. There is a bit of a lull in birding now which I understand it typical during March. Soon the Spring birds including the Fox Sparrows, Song Sparrows, White-throated Sparrows, Savanna and Swamp Sparrows will return. There are other sparrows that often visit this province but I have not seen them. That will be a goal for my Spring birding.
Posted by Lisa de Leon at 9:39 AM