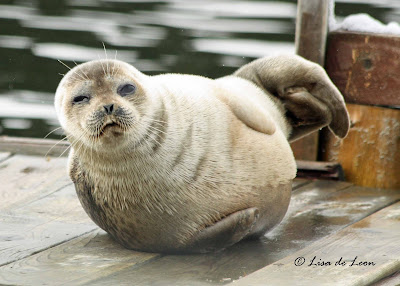 It is hard to imagine that it has been almost two weeks since I took these pictures. Time flies and so did Winter. The Newfoundland Winter Bird Count has ended and the Spring Bird Count has begun. My total species sighted for Winter 2010-2011 was 85. That is low compared to the real birders on this island. In fact, one weekend birding expedition reported 63 species for just two days! I don't know how my total stacks up with last year because I really wasn't keeping good records at that time. 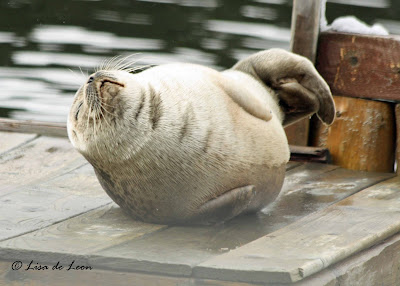 There are many indicators that Spring is just around the corner. Small birds are starting to sing, ducks and pigeons are beginning to dance and prance. Some say that seals appearing on the shoreline is yet another sign of Spring. On my recent drive around the Northern Avalon, I photographed these two seals. Any drive around this province is filled with natural excitement.  This little guy was resting on a dock in Holyrood. We stopped to have a look and he began to play a game of  "cat and mouse" with us. He would take a good look and then quickly flip back as if to pretend he 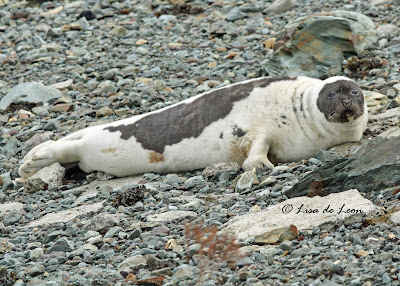 was asleep. He did this several times and was quite engaging.

It was in Cupids where we saw this big guy. He had travelled quite a distance up the beach to have his rest. Like the small one, he studied us and didn't seem at all frightened. These animals are huge. This fact is not so obvious until one is totally exposed.

It is my understanding that both of these are Harp Seals and are pretty rare on the Avalon. It is a special treat to see them. On Saturday, March 13, I saw one very large Harp Seal fishing the waters near Torbay Beach. It certainly scattered all of the birds also feeding close to shore.
If seals lying on the beach, birds singing in the trees and the groundhog not seeing his shadow are truly signs of Spring, then it can't be far away. Noteworthy:  We had sunshine for four days this week! This is the first time since last September when all of the rain washed out Fall. Let's hope for sunny, warm months ahead filled with lots of birds.

As this is Sunday, the day of rest, get off that couch and go for a drive. There is so much to see, just don't look at the price at the gas pumps as it might stifle your day.
Posted by Lisa de Leon at 8:05 AM