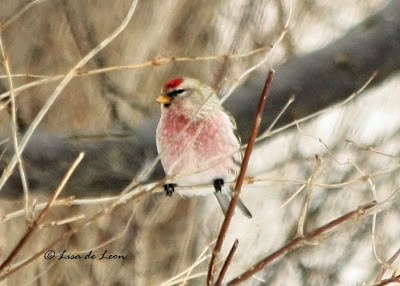 The Common Redpoll is common to Newfoundland and yet, for me, it has been elusive. I frequently see postings that the Common Redpoll is around, but it took me over a year to actually see one. I saw not one but six of these great little birds yesterday. 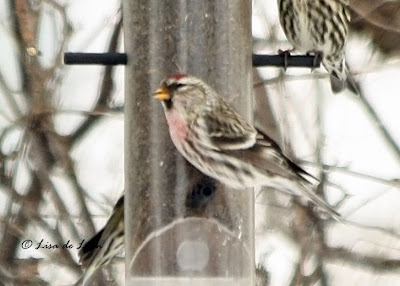 When I first spotted the red showing through some branches, I first thought it was a male Purple Finch. How nice, I thought. Then it popped out of the cover, and I realized that this was the elusive Common Redpoll. There is always a since of great discovery and satisfaction associated with seeing a new bird for the first time. 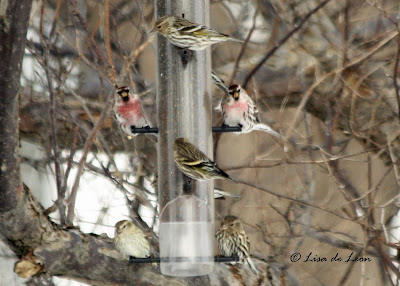 True to its known pattern it was fraternizing with Pine Siskins and American Goldfinches. It seems that this bird is somewhat "flighty." Keeping this in mind coupled with the fact that it was on someones private property, I stayed in my car on the road and got the best pictures I could under the circumstances. It was interesting to watch the Common Redpoll jockey with the Pine Siskins for a place at the trough. There were squabbles but in the end, all got their turn. 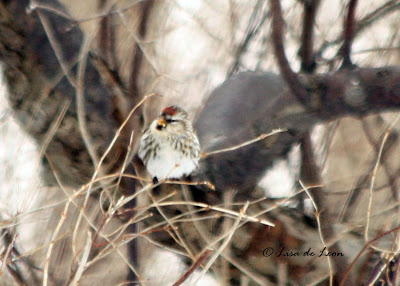 A great place to view these birds in motion is on the bird cam hosted by the By 'd Bay Cabins website, located in Port Blantford. The Common Redpoll seem to be more numerous there now but are also moving into the city. Out with the Bohemian Waxwings and in with the Common Redpoll! Never a dull moment.

The last picture is this series is likely a female Common Redpoll because it has no color on its breast but the dark streaking indicates that it is a Common and not the rare Hoary Redpoll. I will keep a close eye on flocks of Redpolls to see if the rare variety just might be tagging along.
Posted by Lisa de Leon at 9:52 AM