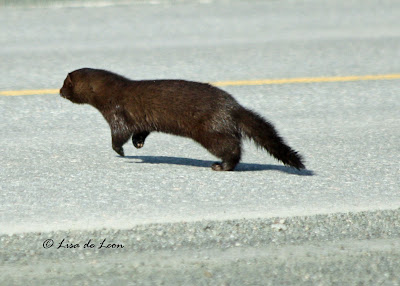 There are still problems with the alignment feature of this blog so please forgive the placement.

On the weekend I tried my best to find a new bird, something that I have not seen before. That just didn't happen. On Saturday I took a long drive through Bauline, Pouch Cove, Flatrock, Marine Drive, Logy Bay and home again. Nothing new! In fact there were surprisingly few birds along the way....except at Flatrock. There I saw huge rafts of Common Eider (from quite a distance). I have never seen so many. Something spooked them and they lifted off by the hundreds. When I scanned the point with my binoculars, I saw two distant figures with cameras in hand. A recent posting on NL Birds describes what happened as the photographers surprised the birds and got a surprise themselves. Check the discussion group for a link to a picture of the lift-off. 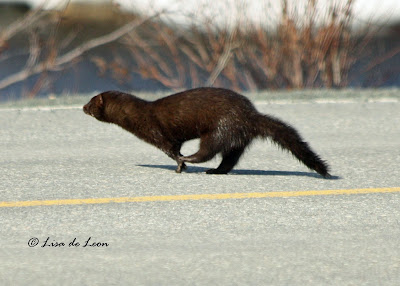 On my way through Torbay I stopped in at Torbay Beach. There I saw several Black Guillemot in their transitional plumage. There were at least five on the water at one point. While there, a flock of seven Eurasian Wigeons flew in and settled to feed in the area of the sewage outflow. Suddenly, I saw something quite large displacing the water. I watched intently for a while as all of the birds lifted off and there I saw a very large Harp Seal working the shallow waters. After about five minutes it dissappeared and didn't resurface again while I watched. 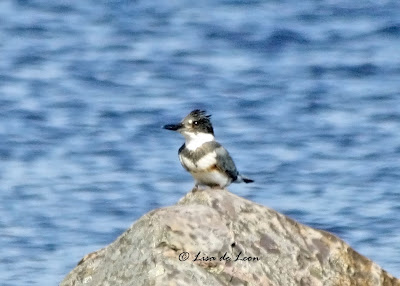 Yesterday, the weather was beautiful and our scheduled birding trip for today had to be cancelled due to the snowfall warning (happening now). Being more restless than usual I got in the car and drove to Renews. I was sure that I would see the Red Knot (a new bird for me). It had been seen in the same area by several people, and I thought I would be next. No! The two of them were nowhere to be seen and even the Black-bellied Plover that is usually ever-present was not there. I checked all areas of the shoreline but turned up nothing. I had to give up. I drove in through the community of Renews in the hopes of seeing several small birds that would make me feel better about making the long drive. What did I see?  Two European Starlings! That's all.

I headed back toward St. John's with some time to spare so I took a detour down into all harbours along the way. In one I found a large adult Bald Eagle sitting on a low rock surrounded by Crows, but my car startled them all and the lift off happened before I could get too close. The one consistent bird around many of the smaller inlets was a Kingfisher in every pool. During the day I saw four. I did check Tor's Cove but there was no sign of either snipe there. I don't know where all of the birds go on a beautiful day but it would be nice if they would match their behaviour with the great birding weather days.

I would have to say that the highlight of my day was seeing this lone Mink near Fermuese. It darted up to cross the road in front of me. I knew I only had moments to try to record the event so it was a sudden burst of scrambling to stop the car, get the window down, grab my camera and capture only a couple of shots of the hind view. This is the first Mink that I have seen in a long time so I came home somewhat satisfied that I had a good consolation prize for my hours of birding effort.
Posted by Lisa de Leon at 12:46 PM