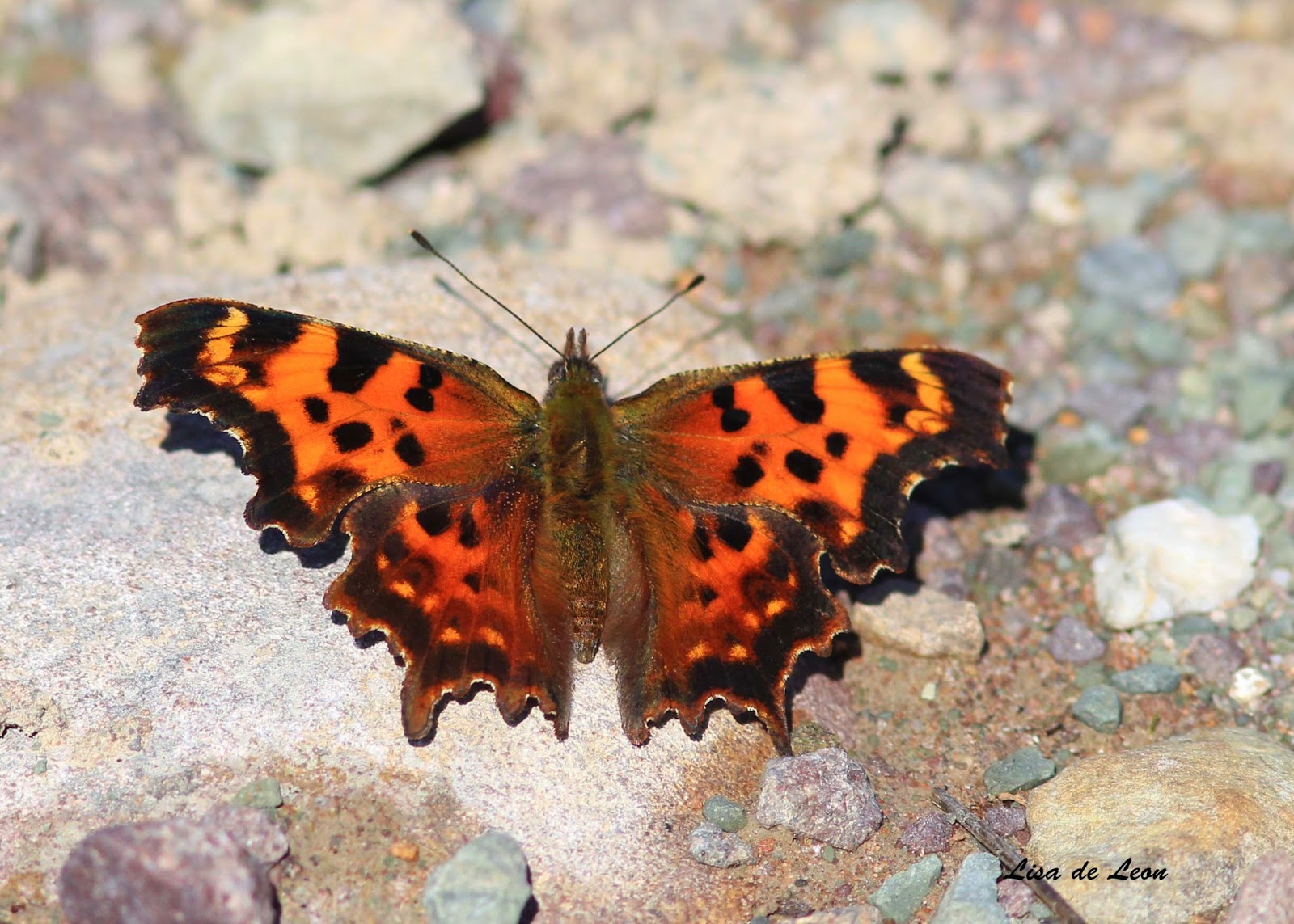 A rainy day, a lot of pictures and a curiosity sent me into discovery mode yesterday. 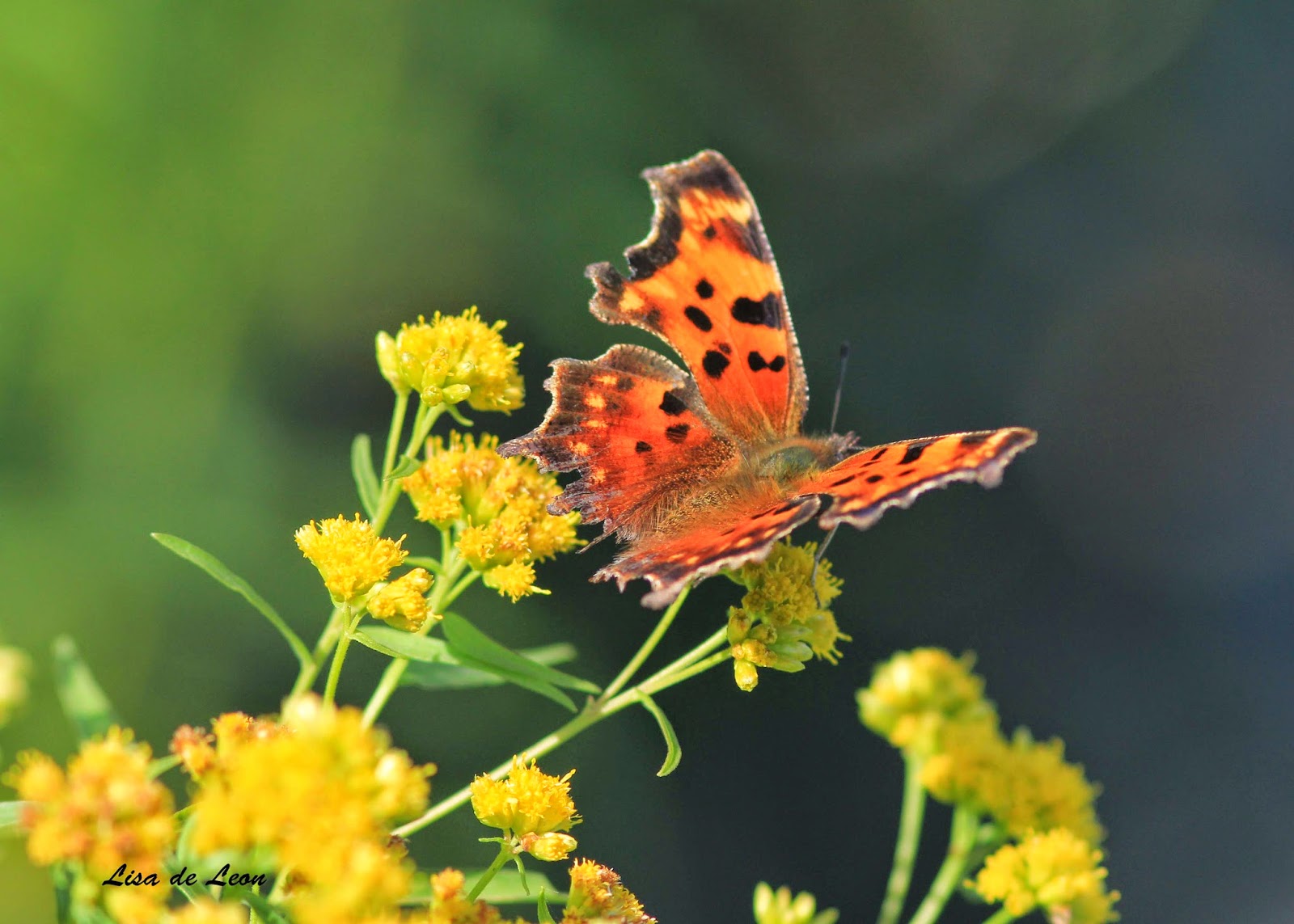 I often see anglewing butterflies (commas or question marks) while I am out birding. I have seen numerous commas but no question marks. 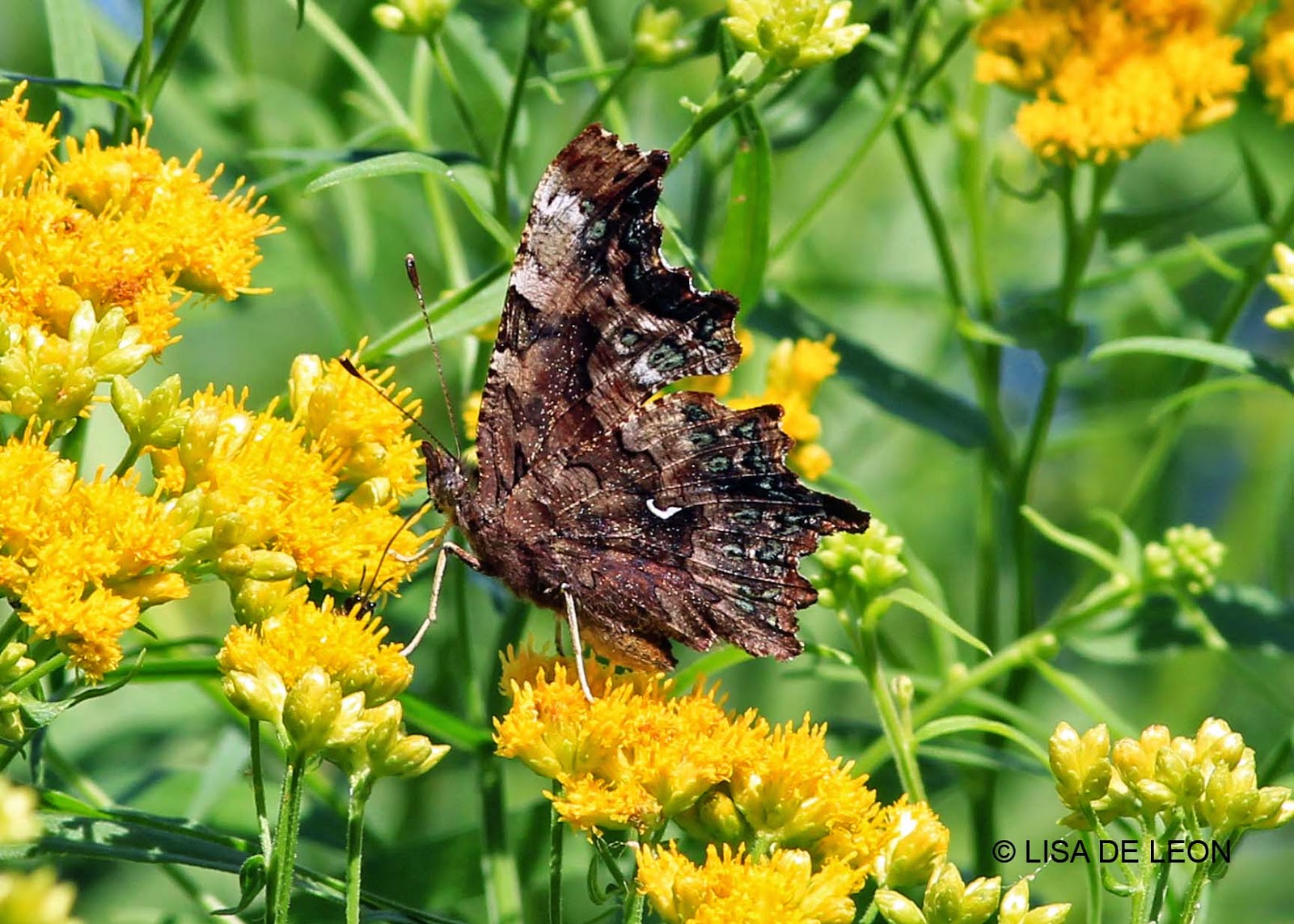 What has peaked my curiosity is they are not all the same. Of course, there is variation within species, but I have seen some differences that lead me to believe I have photographed Green Commas, a Grey Comma and an Eastern Comma. 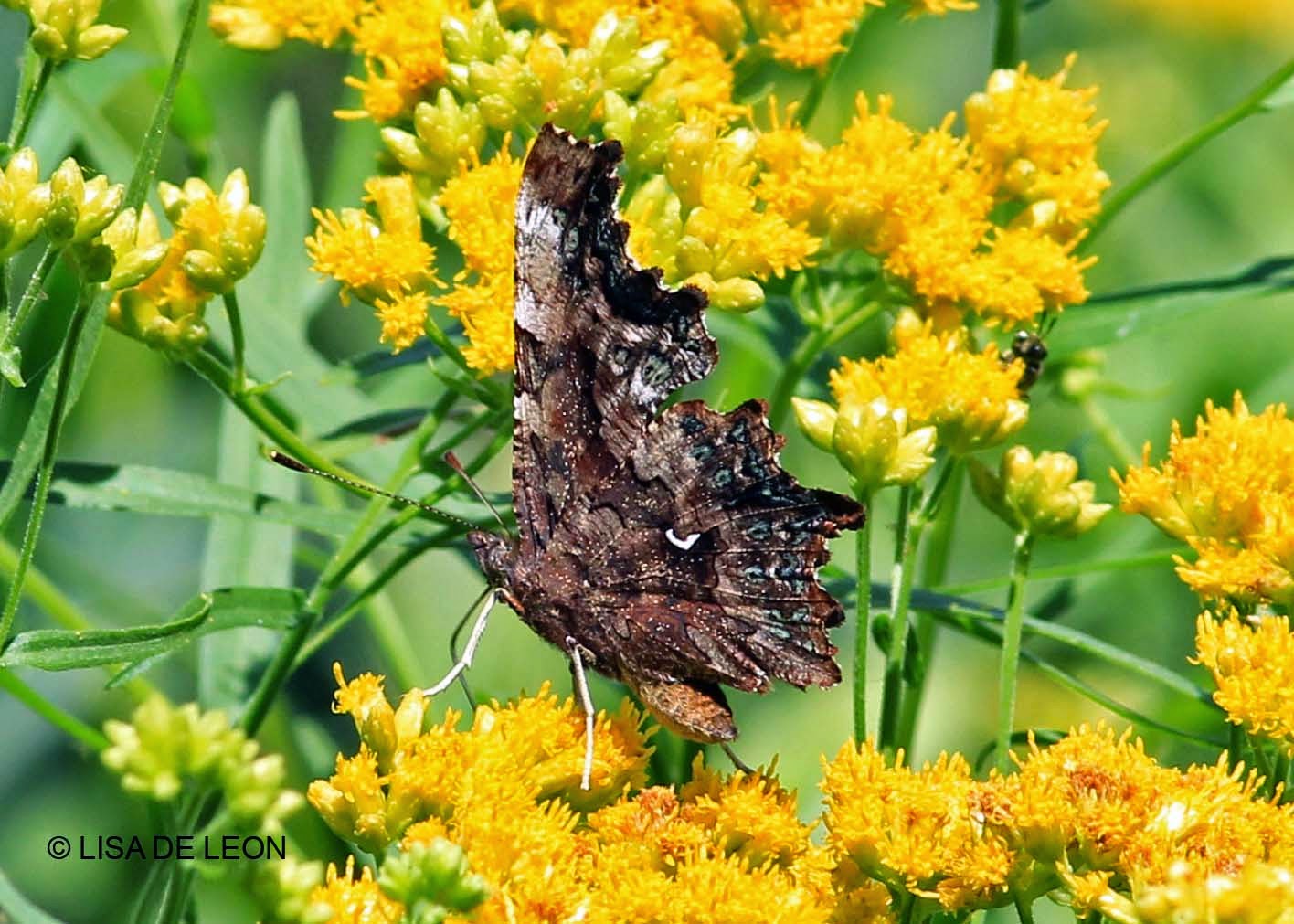 It would be uncommon to see a Grey, even though they are reported to be present on the island. 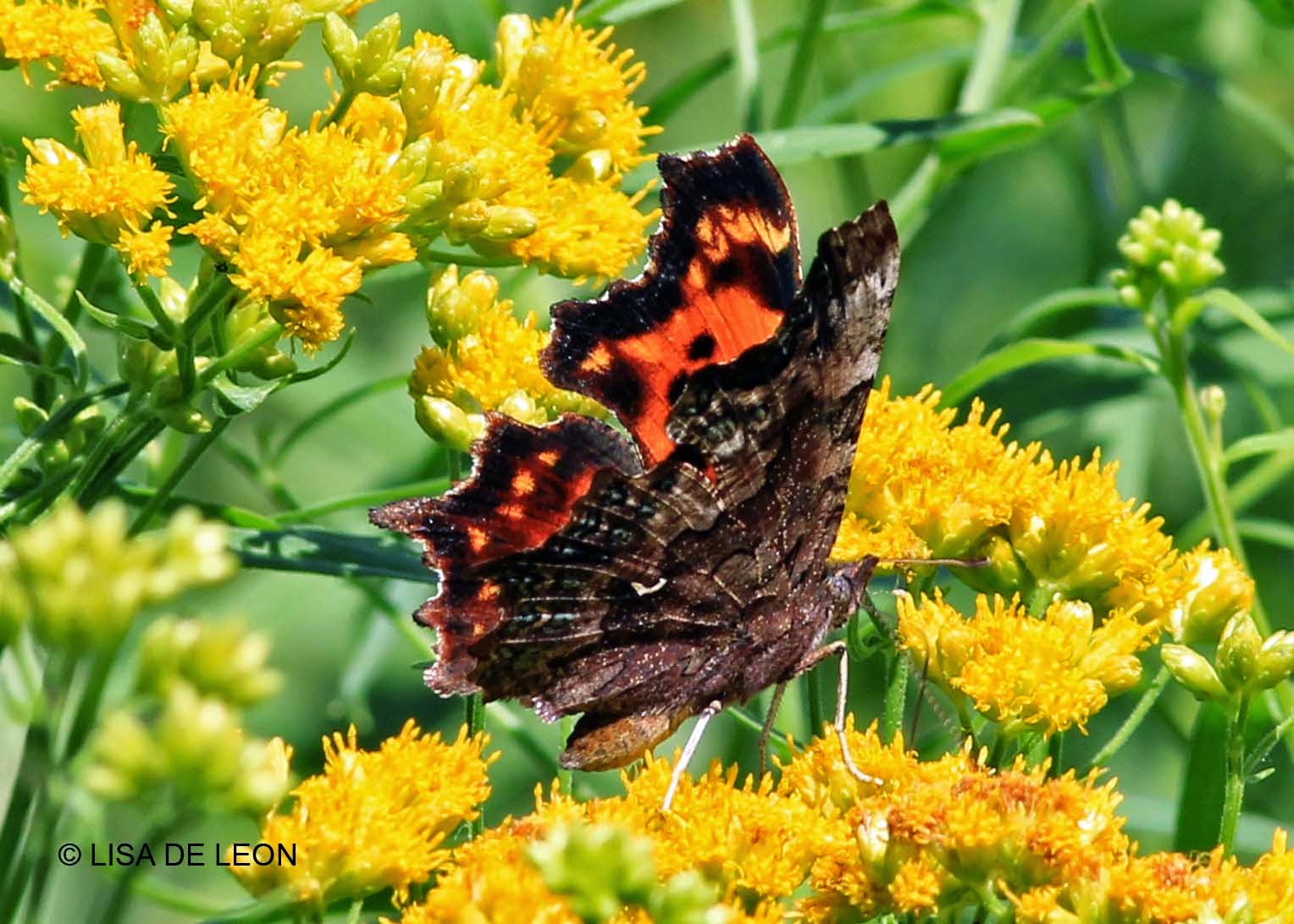 On the other hand, I think finding an Eastern Comma in the province would fall in to the category of semi-rare. 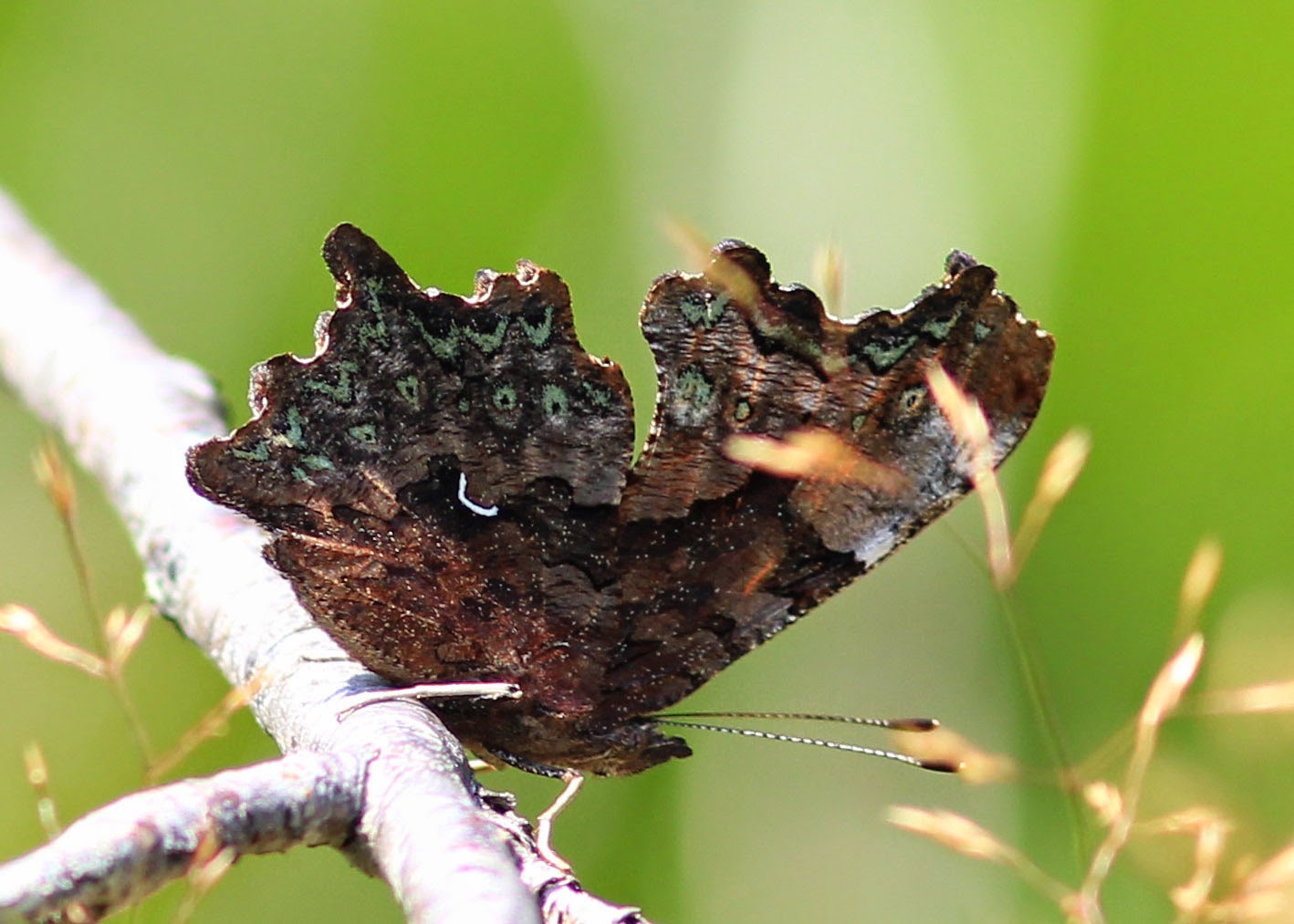 Wanting to confirm whether I have seen anything other than a Green Comma, I began reading comparative reports of the anglewings and shuffling photos. 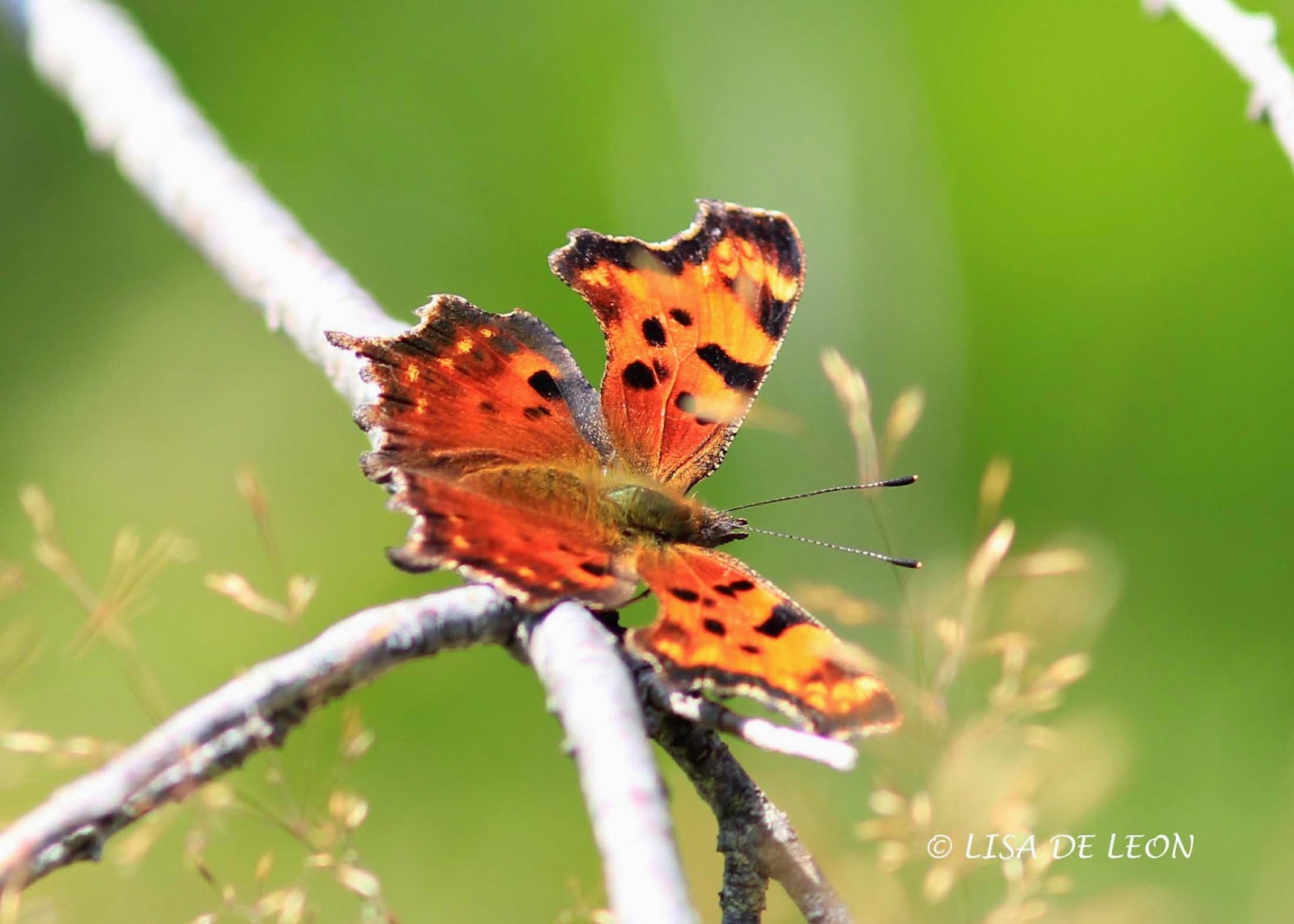 One thing, for sure, it is important to get photos of the top and the bottom of each butterfly. 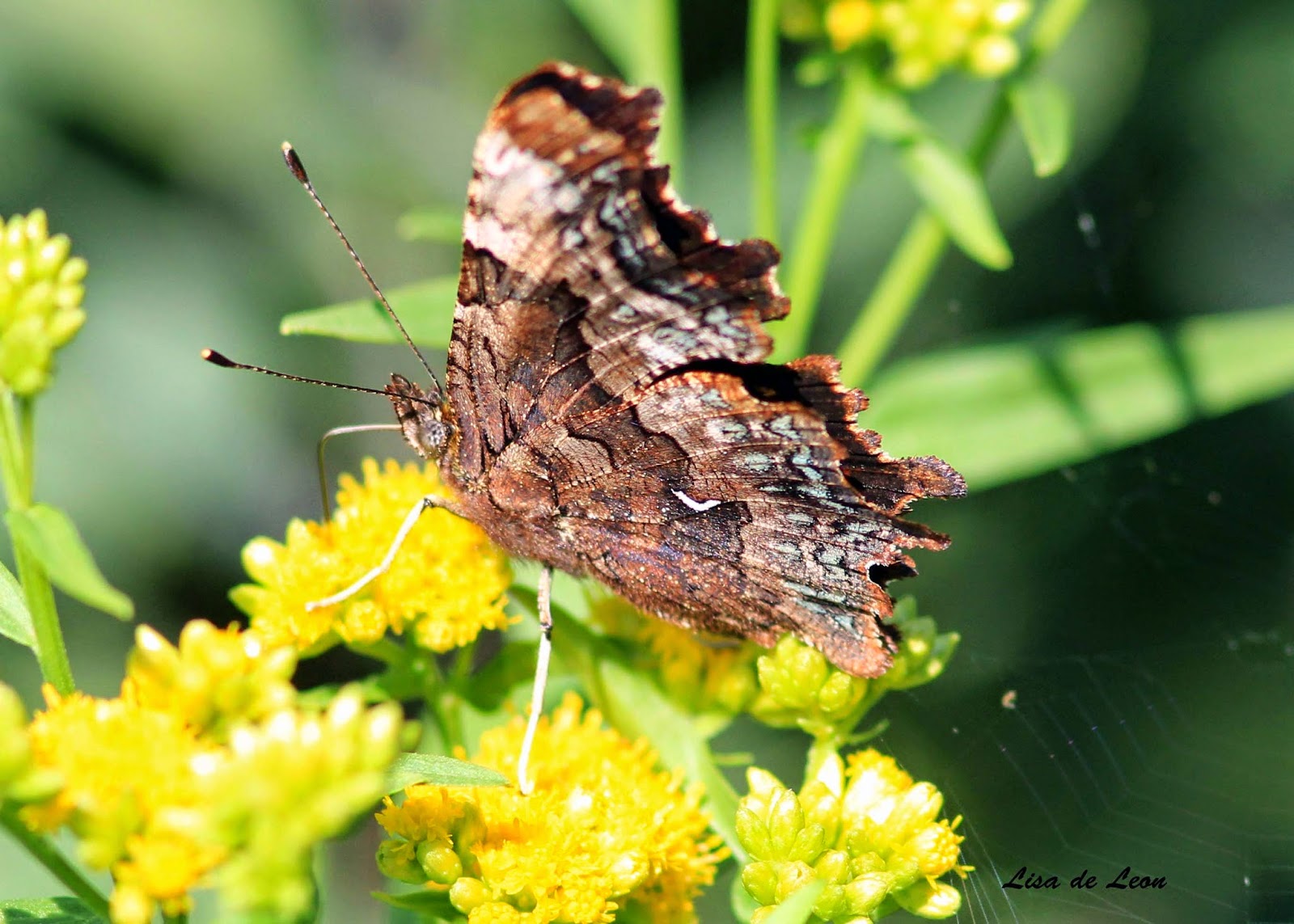 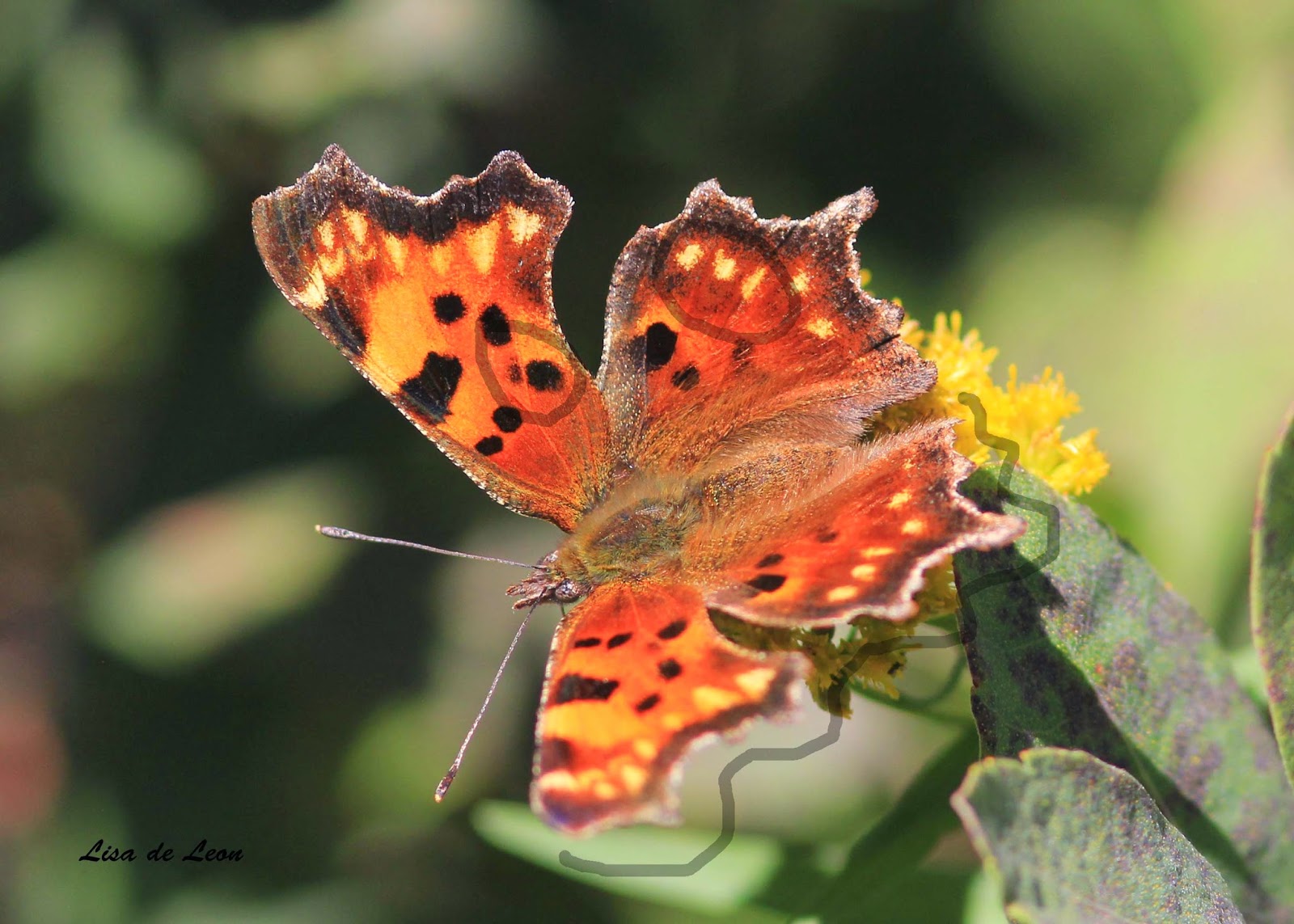 The first nine photos are what I think are all Green Commas. Commas are so named by the silver, comma shaped mark on the underwing. Checking several sources, I found these descriptions of the Green Comma and this is what I compiled: 1) Black margins of the wing are darker and wider than other commas; 2) The edges are more jagged than other commas, and wing projections are longer; 3) There is a band of yellow spots on the hindwing; 4) On the underwing, there is a thick comma that is sometimes clubbed or hooked on one end; 5) On the underwing there are bands of green spots near the edges of the wings; and 6) On the upper side, there is a dark spot closest to the edge of the forewing. In the photo above, I have circled item # 3 and #6 as well as indicated the jagged edges mention in #2.
The comma (item #4) and the band of green spots (item #5) are easily seen on the closed-wing image above. 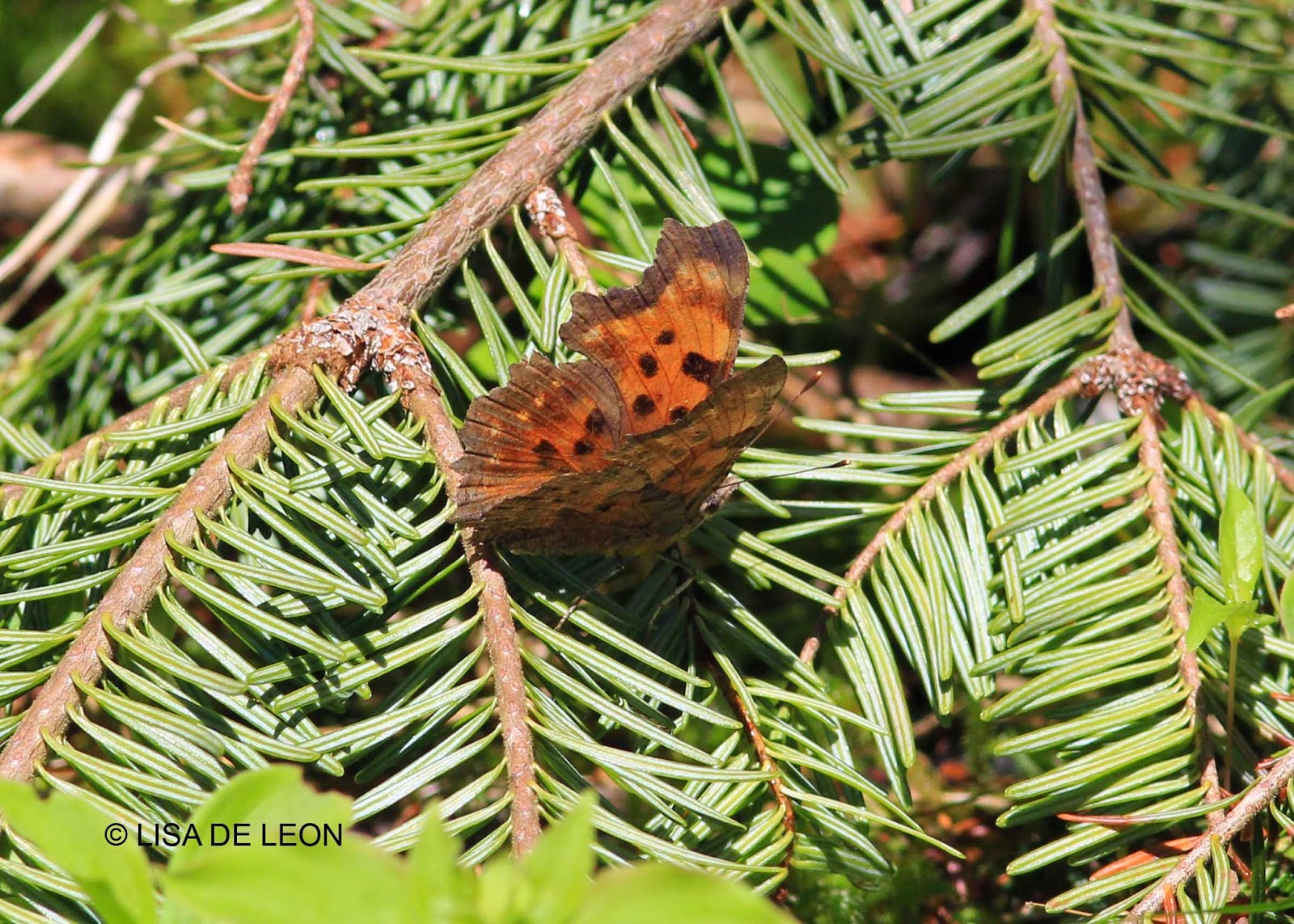 Grey Comma: Unfortunately, I only have two images of what I think is the Grey Comma.  The Grey Comma has: 1) Orange wing with black margins, not as dark as the Green Comma; 2) There is a row of lighter spots in the margin of the hindwing; 3)  The black spot nearest the trailing edge of the upper forewing may not have any spot above it, but can have a faint spot. 4) The Grey Comma can be much darker in the summer; On the underwing the silver comma is very thin and tapers to a point on both ends; 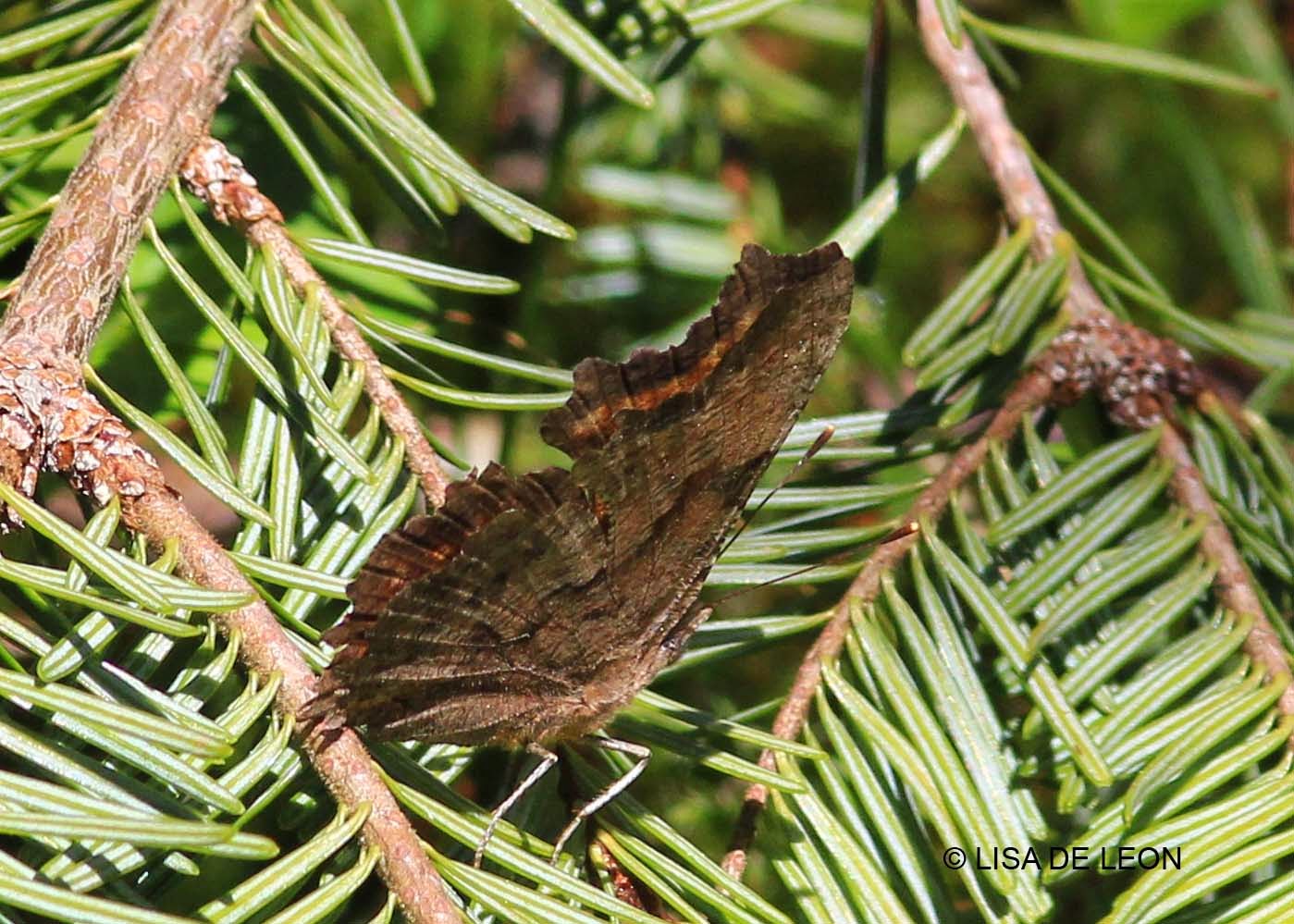 5) The green band of spots seen on the Green Comma are not present on the Grey; and 6) The edges can be ragged (this one has some damage), but the trailing long extension is much shorter than the Green. 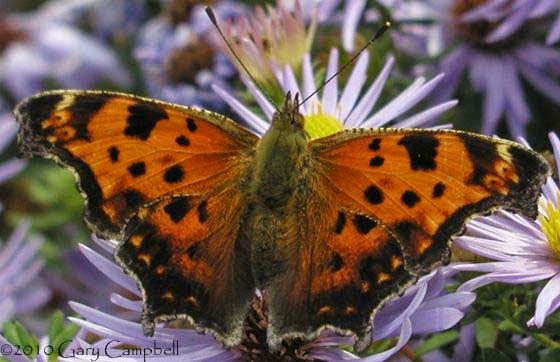 Eastern Comma: Now, this is where things get dicey. I have included a shot by Gary Campbell taken in 2010...not in this province. His photo is followed by mine for comparison. The Eastern Comma is not listed on the MUN list of Butterflies in Newfoundland, but it's range as reported on the Government of Canada site includes Newfoundland. 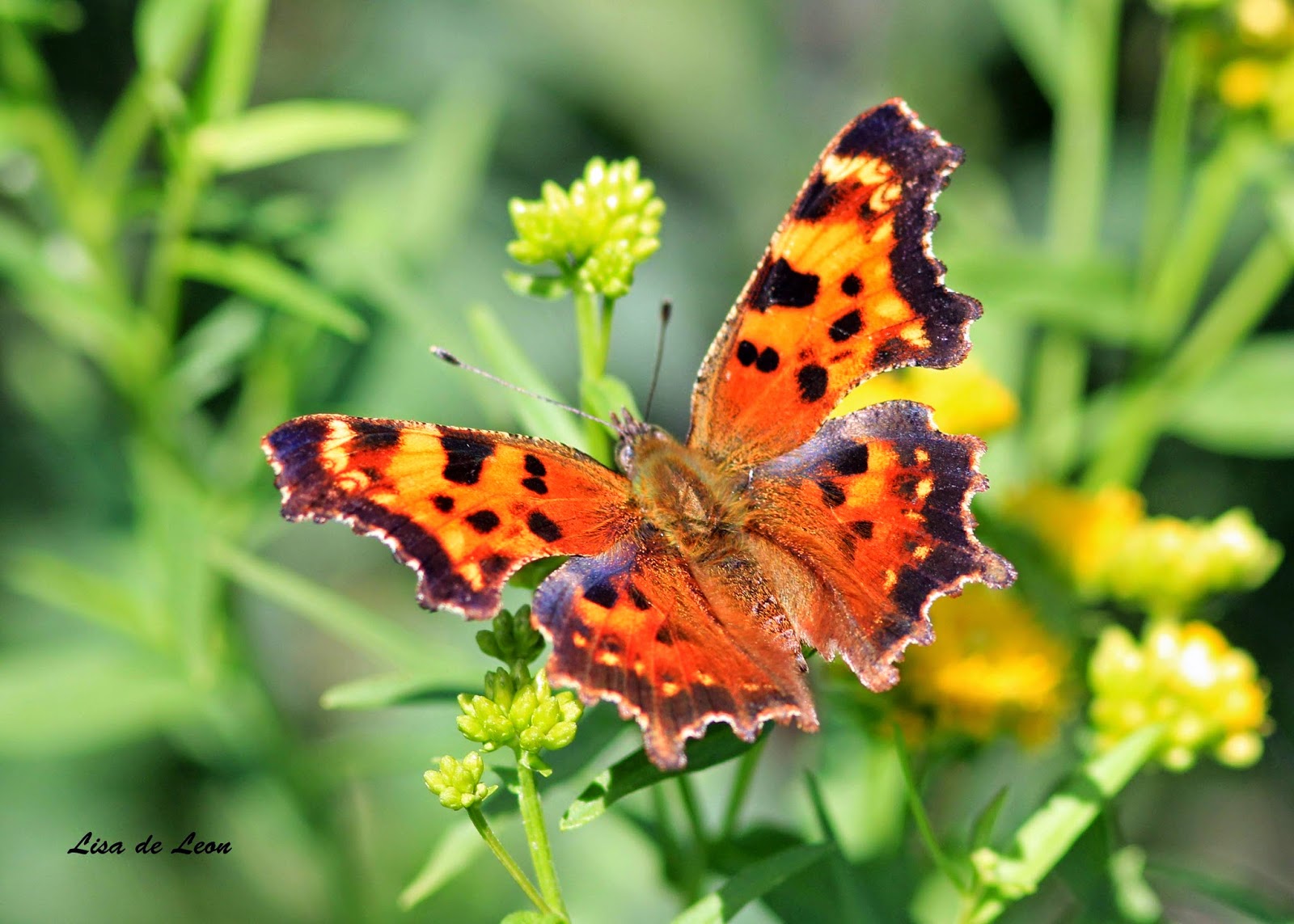 Eastern Comma Identification: 1) The hindwing projections are small and short compared to the Green Comma. 2) The butterfly is brownish-orange with dark spots; 3) The borders are dark with pale spots (hmmm...sounds like the Green Comma and the Grey Comma.) 4) The forewing spot (circled in image of Green Comma) has a faint dot above it; 5) There is a distinct dark spot in the middle of the hindwing; 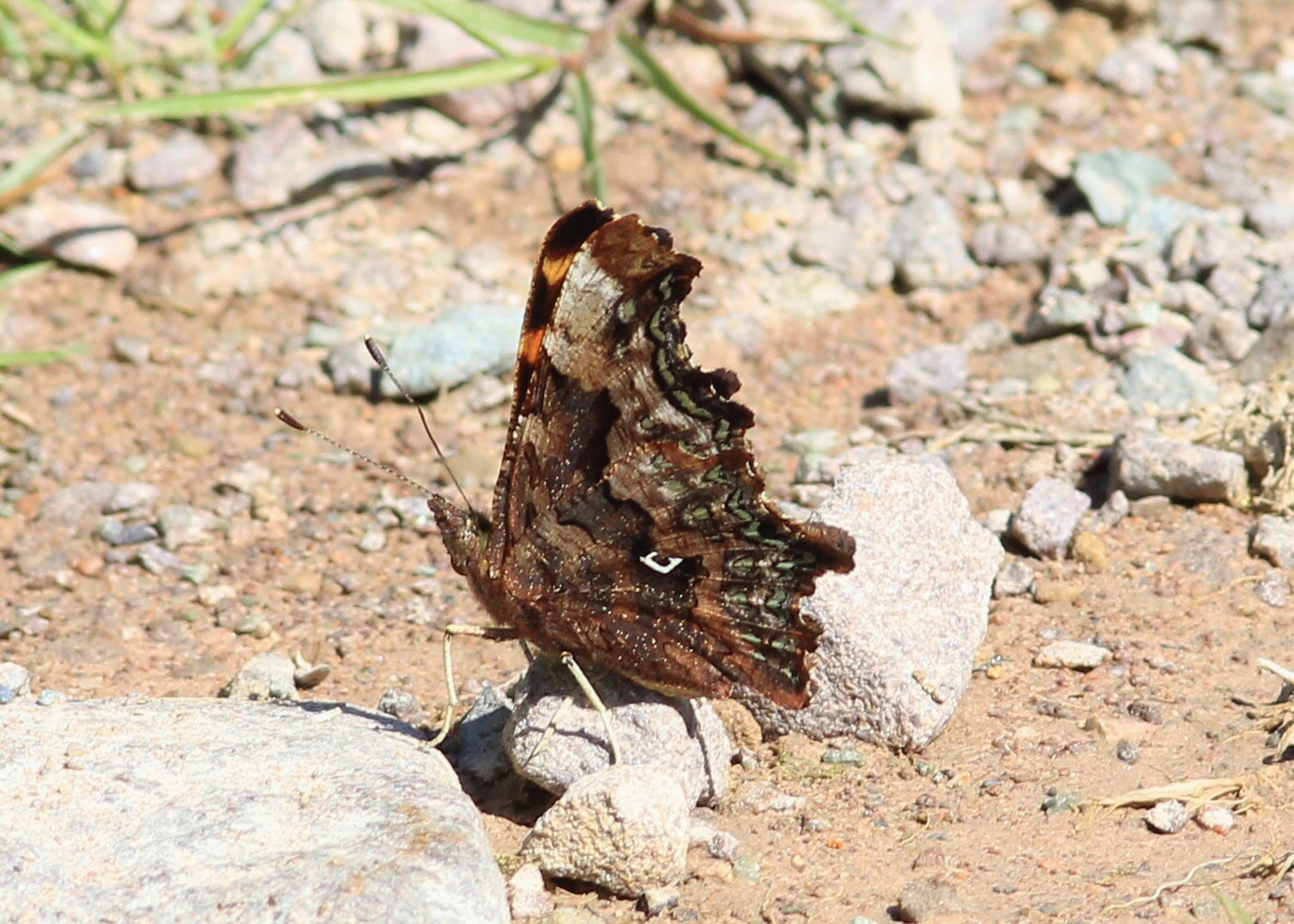 6) Underneath he comma is thick and is clubbed on both ends.

Yet, the confusing part is that this butterfly seems to have a green submarginal band which would suggest a Green Comma. However, a close look at the pattern of the upperside of the Eastern Comma shown in the photos here is distinctly different from the Green Comma picture above. 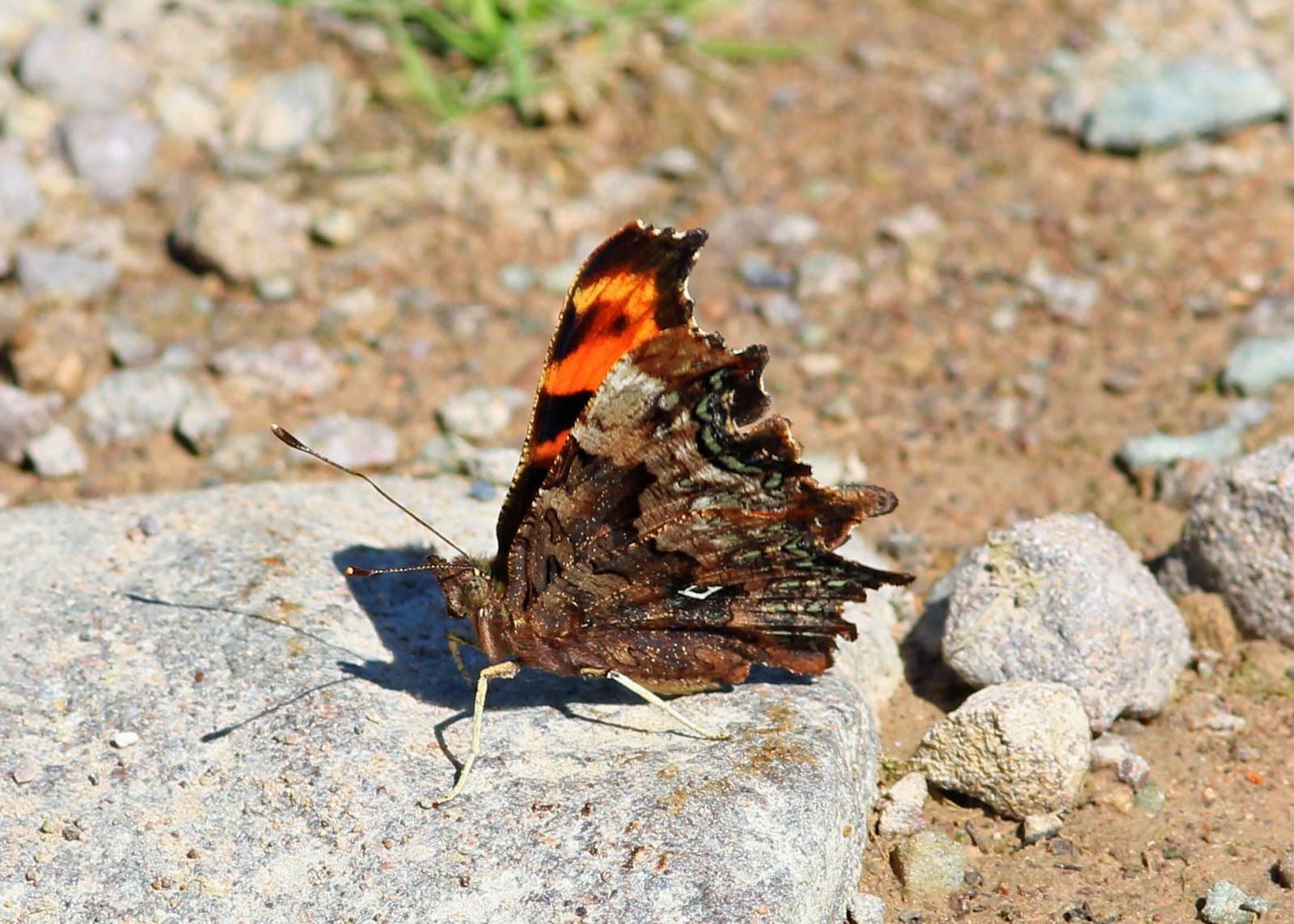 I have poure over several hundred photos to extract these and attempt to match them with the descriptions available about the species. My eyes are blurry....and I thought identifying birds was difficult! I leave it to you, if you so choose, to puzzle out the differences among these three anglewing butterflies. I'm done!
Posted by Lisa de Leon at 3:53 PM