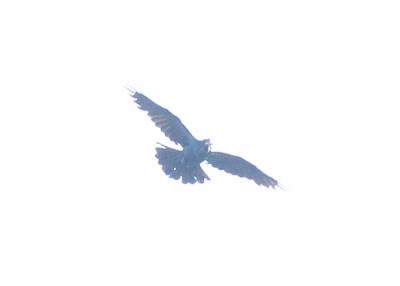 Last Sunday morning, I took a drive out to Cape Spear. With the high wind, I chose not to get out of the car. As I was leaving the main parking lot, I spotted this raptor that looked different. I scrambled to stop, get my camera out of the back seat and managed to get a couple of shots of this bird. It seems to have red on the beak. The bird flew from over the land toward the point of land that extends out into the water near where the Black-legged Kittiwakes nest. It was very, very far away. 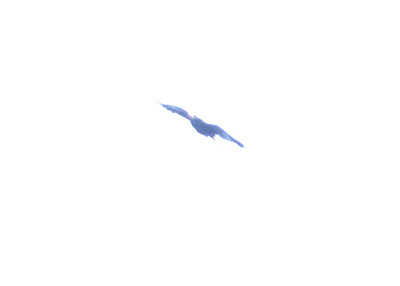 It was only yesterday that I had a chance to look at my pictures from that day, and I was really struck by how different this bird looked. I sent the pictures to two experienced birders to have a look. Because the pictures are so poor, it is taking a while to get an ID. In the meantime, I thought I would share the mystery bird so that if anyone sees it again, it can be photographed better than I did. I will keep you updated if the bird is identified.
Click to enlarge.
It turns out this is not a raptor at all but a Raven, likely carrying something red in its mouth. I guess that is why is was being pursued so vehemently by the crows. This kind of excitement, followed by deflation, is not uncommon. Thank you to everyone who looked at the shot and offerred suggestions. It did turn out to generate some good study and discussion.