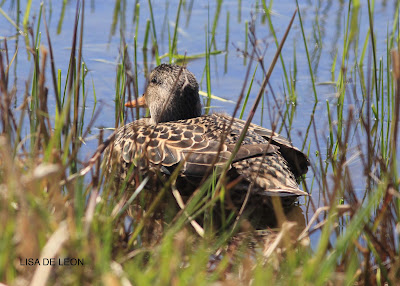 Since December, a female Gadwall and Northern Shoveler have been hanging around St. John's. At that time, the shoveler was not in full plumage, and it appeared it was a female. 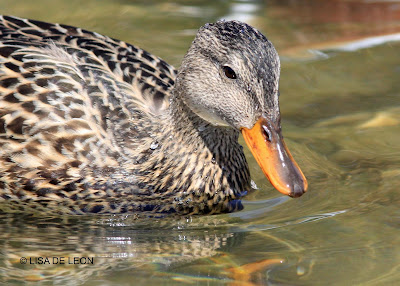 Birders have been watching them during the winter months, when possible. They kept moving from pond to pond and stream to stream. It was impossible to predict where to find them. 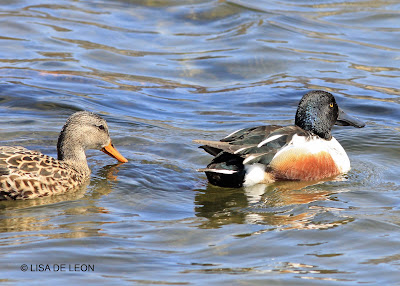 There were several days when I walked around four ponds and drove to QV Village to try to locate them, with no luck. When I returned home and checked the discussion group, I would find a report saying they had been seen at one of the ponds I just walked! How could that be? 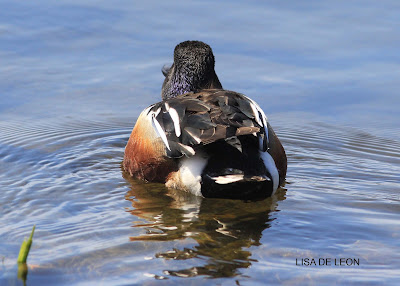 This pair has been spotted one minute and then gone the next! Finally, after multiple tries, I found them at Kenny's Pond around mid-day last Sunday. 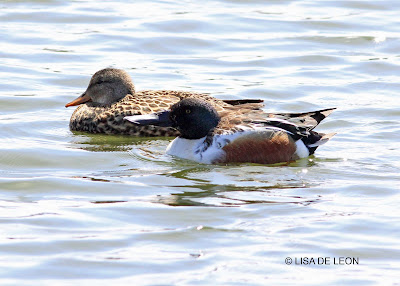 The female was tucked in the brush along side the ponds edge, and the shoveler wasn't far away. They didn't stay there long. Despite many people walking past them all the time, the minute I stopped, they started to swim out toward the center of the pond. Then, of all things, they tucked their heads in for a rest and drifted around in the direct glare of the sunshine forever! 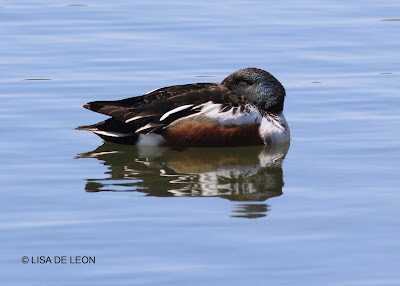 Thinking they couldn't sleep all day, I decided to stroll around the pond to break the monotony and hope they would sleep it off. 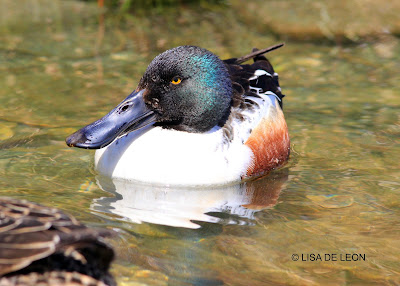 As I rounded the pond and neared the eroding wharf, I saw them - really close.  Knowing they were particularly skittish, I stayed low, and they swam around the area like they owned the place. 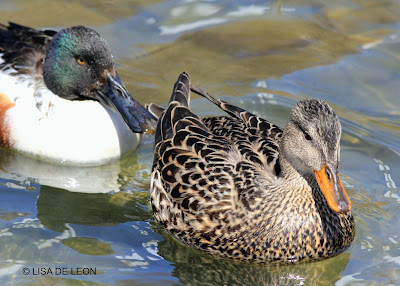 These two ducks have been particularly interesting to watch. As a birding community, St. John's has seen this pair go from being total strangers to becoming a fast couple. Lancy Cheng  actually captured the moment of consummation: http://www.flickr.com/photos/93331440@N08/8653500600/in/photostream
While there is no sign that they are nesting yet, that may come. If so, we are all eager to see the hybrid. This is not the first time a Gadwall and Northern Shoveler have joined up. This link: http://www.flickr.com/groups/hybridbirds/discuss/72157601845174755  provide pictures and some discussion about other dsocumented Gadwall/Shoveler couples.
And so, we continue to wait and watch to see if our pair produce any offspring.﻿