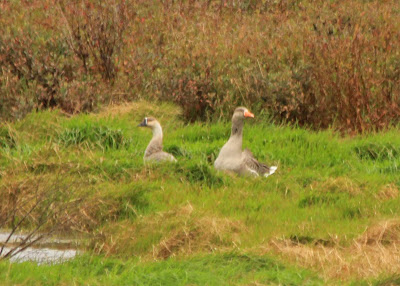 By birding standards, I don't travel to the Southern Shore of the province very often.  It takes a rarity or an amazing report of warblers on Bear Cove Point Road or beaches crawling with shorebirds in Renews to lure me there.  Over three years, I guess I have passed through Ferryland more times than I can count. 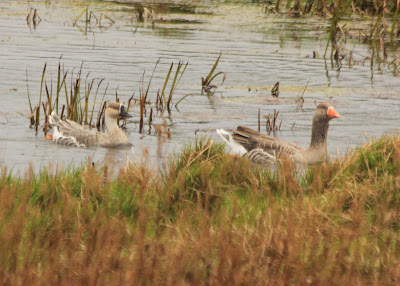 We have had some high winds recently that have brought in some interesting birds, so about a week ago, Margie M. and I headed South.  You can imagine our surprise when we looked into the marsh at the Y in Ferryland.  There were two geese. Wild Graylag Geese don't frequent this island, but there before us was a Graylag and another smaller, unknown goose.  Was it as young Graylag?  Our imaginations ran as wild as the thought of a non-domestic Graylag Goose appearing out of nowhere. 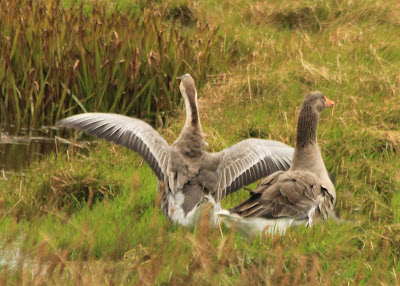 Having travelled this way before and never seeing these geese fueled the excitement. What was up with these two birds?  Well, having later checked them out with other birders, it seems these geese are typically penned nearby. Oh, too bad. 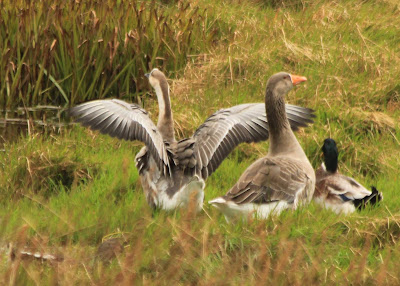 Then, I became quite curious about the non-graylag goose.  What was it? Yahoo for the Internet! First scan looked much like an African Goose, but it doesn't have the raised node on its nose.  I kept looking and found this is a Domestic Swan Goose. It is a very interesting small goose with the dark stripe down the back of its head. While thoughts of having a great "find" were dashed, it was interesting to learn about this bird.  I guess I can liken this to a gold-find: A sparkle of gold-colored ore can make one wide-eyed, but when it turns out to be fool's gold, one becomes wide-mouthed. 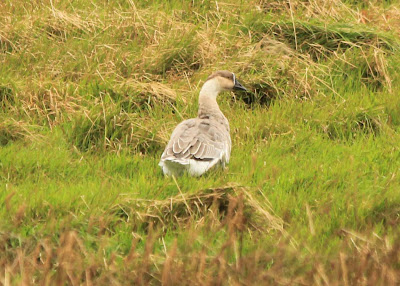 And so, the domestic geese of Ferryland have become yet another learning experience. 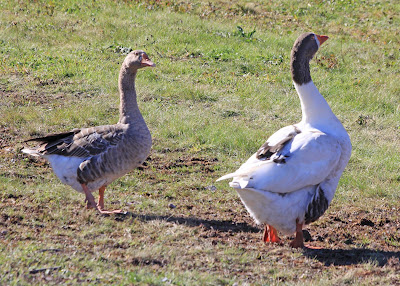 Wiser now, but still surprised, I came upon these two geese near the playground in Blackhead. They caused a tire-screeching stop, again. There was another Domestic Graylag and a what?  A giant what? 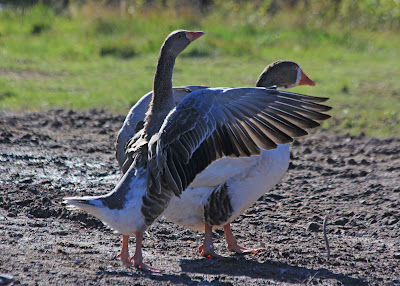 I approached these birds and there was no flight. Here was another pair of Domestic Geese on a drive that I do several times a week. I have never seen them before. The Graylag seemed to be protecting the much larger bird.  Sorry about the dark pictures, but I couldn't get behind them to get the sun in my favor. 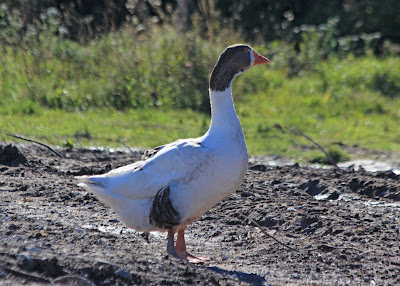 I began looking for info on this domestic breed. I came across two breeds that resemble this bird, but not exactly.  I guess domestic birds are like that since there is often mixed breeding.  One type of similar goose is the Pomeranian, developed in Germany.  The other is a Twente Landrace which originates in the Netherlands. 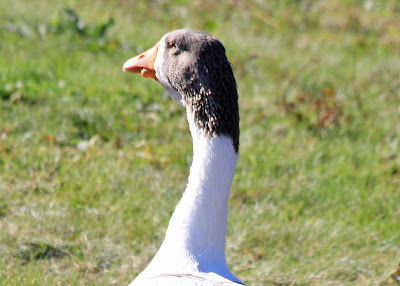 This image shows a bit of the blue eye of this bird. Both the Pomeranian and the Twente Landrace have blue eyes. Beyond that, I have not pursued the technical info necessary to differentiate these two breeds. For my purpose, all I know is this is one BIG goose, and there are clearly more domestic geese in the province that I expected.

It baffles me why any owner would allow these kinds of birds to roam free during a very active hunting season.﻿
Posted by Lisa de Leon at 6:40 AM