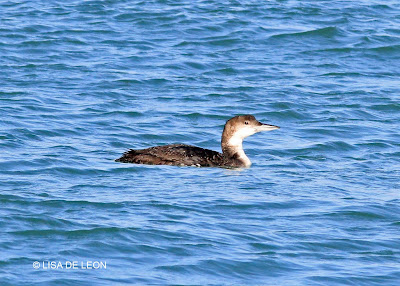 An impromptu trip to Cape Race with Catherine Barrett yesterday reminded me just how hard sea birding really is! Many factors contribute to this, not the least of which is my limited knowledge. An annual trip to explore the birds inhabiting the waters along Cape Race Road provides limited opportunity to really study the many birds that appear in this region. 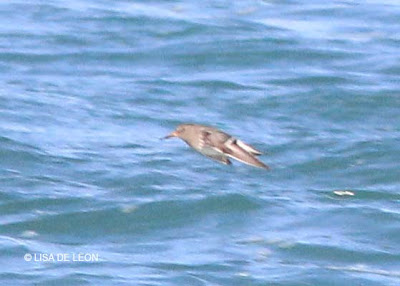 In addition to limited knowledge and limited exposure there are several other aspects of sea birding that pose challenges. Birds are fleeting, such as this single Purple Sandpiper that in a flash flew by and was gone again. Without this blurry picture, we would have been left guessing this was most likely a Purple Sandpiper because of the season and location. Guessing is sometimes necessary, but I really do like to have something a little more concrete to base an identification. 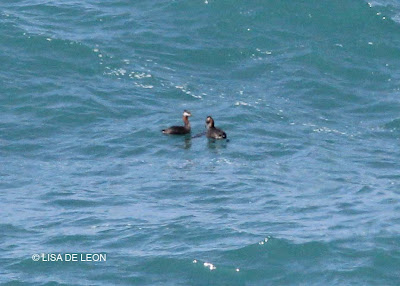 There were many, maybe 30, Red-necked Grebe on the waters near Long Beach. Trying to get a good look at these birds was quite a challenge. Like many other seabirds, it is something of a "now you see it; now you don't" scenario. Why? Well the waves roll in and swallow up the bird, or the bird dives and doesn't resurface in the same place, or the bird moves into an area of sun-glare where it is impossible to scan, or the bird turns its back to you and swims out to sea, increasing the distance and making it impossible to see enough detail to identify the bird. 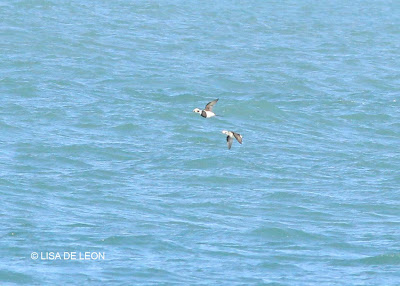 Distance and sun glare or fog are major barriers to sea birding. We were fortunate to have the light in our favour most of yesterday and were able to see the Long-tailed Ducks very well. 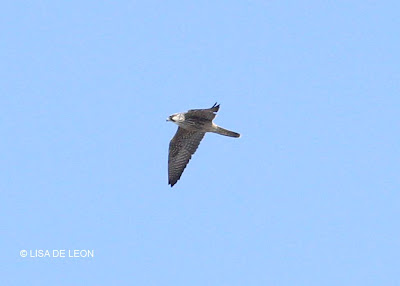 Aside from the shoreline, Cape Race Road often offers up many other opportunities to see birds infrequently seen elsewhere. We were caught off guard several times yesterday when birds just suddenly appeared out of nowhere and quickly disappeared over the hill or around the bend. Among these were were two Canada Geese that lifted off quickly and vanished in the distance. So quick were they, we couldn't even get the binoculars up. At another point a lone Willow Ptarmigan flushed up on the side of the road and disappeared into some small (very small) evergreens on the side of the road. I tramped through the tuckamore and wet ground where I flushed the bird once more, giving Catherine another chance to look at it. 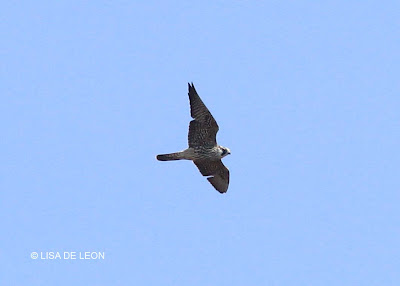 Then, there was the adult Bald Eagle that appeared over the edge of a hilltop and got away before I could lift the camera. Another raptor surprised us. As we were sea watching, we heard a different sound. I began to scan the area and out of nowhere this Peregrine Falcon flew over us and off into the distance. Again, getting a picture of this one confirmed our ID. It's not that we weren't cognizant of the many birds that may show up in this area, it is that there is so much area to scan from the shoreline, to post tops, to roadside and distant rocks. There is often heart-stopping excitement every time something shows up, because any bird in this area could be a rare bird. It is necessary to be on "high alert" on Cape Race Road at any time of the year. 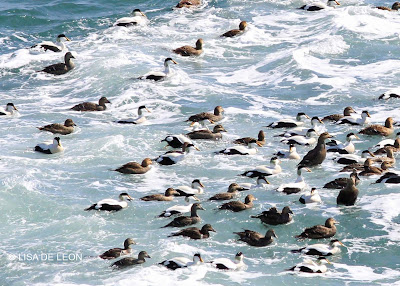 This trip also provided the opportunity to see a beautiful flock of Common Eider near the rocks at the Cape.  With Catherine's scope the views were spectacular. 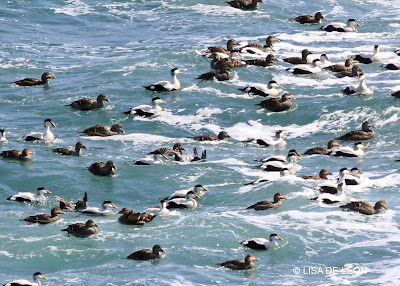 There is always the possibility that there may be a King Eider among the large flocks of Common Eider, so it is imperative the scan the flocks carefully to avoid missing something quite spectacular. 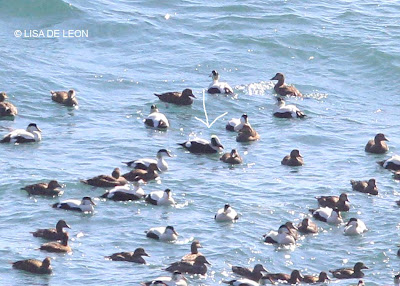 When reviewing my pictures, I found this very odd looking bird with the Common Eider. It seemed to have a white head, black cheek, different bill and more black along the side than the male Common Eider. What was this!  Well, I sent it to Bruce MacTavish to get some help with this one. Of course, I couldn't find it in a guide. Bruce wrote back that this strange looking bird was a male Common Eider preening itself. With its head turned on the side, it appears to have a black cheek, and the white from the side of the face appears to be a white head. I can see that, but I just can see how the beak ended up looking so different. Oh well, this is a classic example of what I mean when I say "sea birding is crazy-hard!" (Click to enlarge the picture for a better view.) 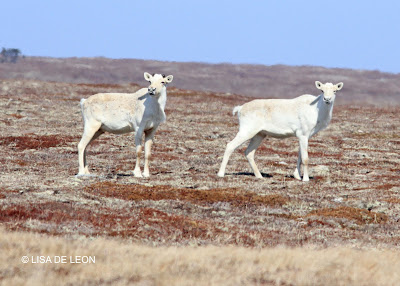 Along with the birds we saw yesterday, we were also delighted to see these two Caribou. In addition to Caribou, we also saw seals and an otter (in another location.)
Other birds of interest included seven American Robins and approximately seven Common Redpoll. They simply would not cooperate, so we didn't have a chance to scan them for a Hoary Redpoll. All of this and more added up to be an amazing 12-hour day of birding. Where in the world did the time go?