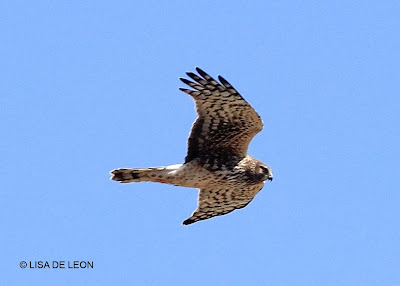 The first report of a sighting of a Northern Harrier in 2013 came from John Gosse on April 16. He spotted the bird in Cape Freels South in Central.  When I checked my records, I noted that I found the first one on the Avalon on April 18 of last year.

Considering this, I took a dart out to Power's Road yesterday to see what I could find. I didn't go very far up the road before I turned around. Coming down over the hill, flanked by two fields, I spotted this bird in the distance. I kind of thought it was just a crow, but I watched it. As it drew nearer, I saw the brown. Grabbing the camera, I was able to get this shot as it flew over the road directly in front of me.

Also yesterday, Allison Mews and Ed Hayden spotted one on the barrens of the Southern Shore near Portugal Cove South. I think it is safe to say - they are back. The closest place to see one is in Goulds. I had several on Power's Road last year and one that hung around the field before the entrance to Cochrane Pond Road. As I write this, I also recall the snow was completely gone in these areas last year. That is not the case in 2013!
Posted by Lisa de Leon at 8:55 AM