Some Just Get Away! It is very common for me to get a brief glance of a bird and not be able to identify it or even to get a picture for later scrutiny. It is pretty frustrating when that happens, but it is better to have seen and missed the ID than to not have seen them at all. This warbler was seen on Rennie's River in late October. There was also an Orange-crowned Warbler at the location at that time, but this warbler flew in briefly and off again. There was no hope of getting an ID from this picture. However, Paul Linegar spotted a Nashville Warbler at this location in December. Could this have been that bird? I am left wondering, because I will never know for sure. 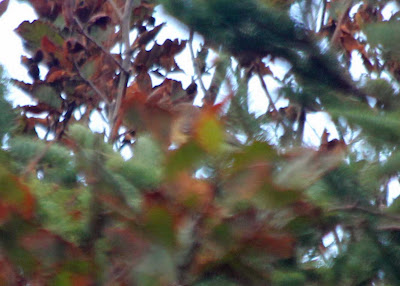 Buried amid the foliage in this shot is another warbler spotted in Tors Cove that flew in and off again in seconds. It is pretty exciting when this happens, as it sets off a great hunt to try to see the bird again. Sometimes I refind it, and sometimes I don't. This one had to remain as one of those that got away in 2012. 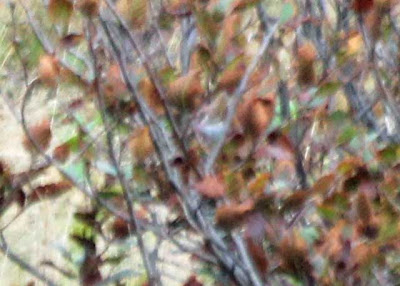 Also at Tor's Cove in a frenzy of bird activity, where Margie M. and I saw a female Black-throated Blue Warbler among many others, was this mystery bird with a white breast and a white line on its face. There is no way of identifying this bird from this picture.  Ugh, I hate it when that happens. 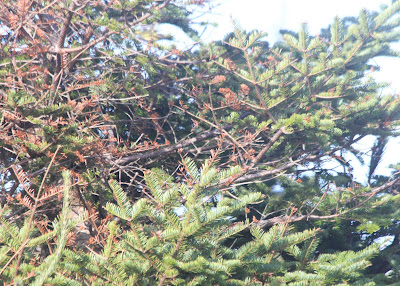 Then, there are those that flit in front of my lens when I am aiming at another bird. This is what happened with the small bird in the upper left corner. It just appeared and was gone again. 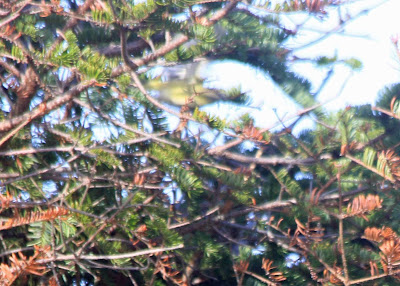 Once the picture was enlarged, it looked like this may have been a vireo. It is moments like this that make the birding experience rich. The challenge is great and the burst of excitement escalates beyond description. A "what was that bird?" moment causes the heart to pound and the senses to perk up. It is kind of like that slot machine moment when two matching symbols fall into place, but the illusive third one hangs just out of view creating yet another miss. 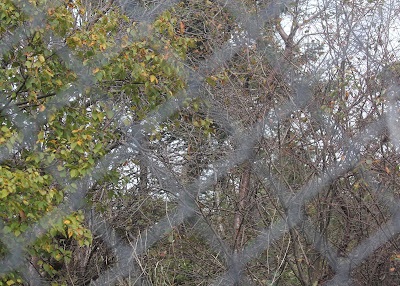 So many time, I am stuck trying to shoot a bird through an obstacle, i.e. fence, branch, foliage etc. This was the case in this picture. Can you see the bird in the middle of the photo? (click to enlarge shots for a better chance of seeing it.) 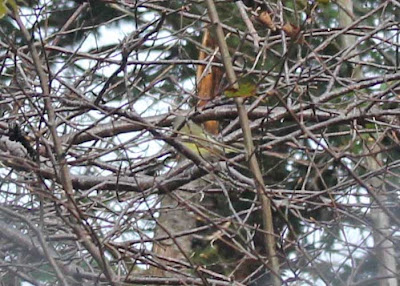 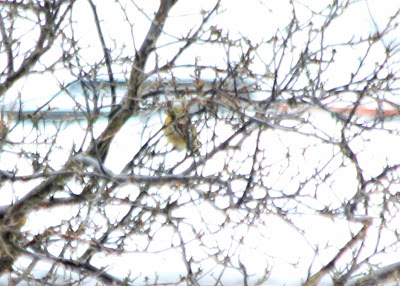 The second picture above is an enlargement of the fence image. This bird didn't quite get away. It turned out to be a Blue-headed Vireo, my first. So why shoot through obstacles? Because sometimes, it is a great bird just waiting to be identified.

The last bird that got away without identification was this great little yellow bird (last picture in the series) seen in late January. I was shooting from my car into the backyard on Exeter Ave. I could see enough to rule out American Goldfinch and Baltimore Oriole, but I could not see enough to get an ID. After taking this shot and other similar blurry, obscured images of this bird, I got out of the car. End of story! The bird flew off. I am left wondering, yet once again.

I will have to be very quick on the trigger this year to limit the little birds that evade documentation.
Posted by Lisa de Leon at 7:46 AM