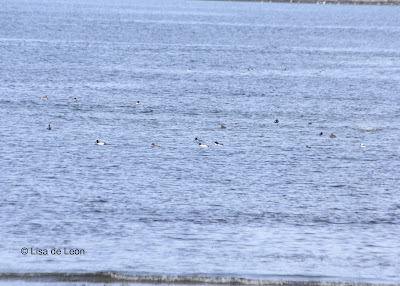 Each winter a Barrow's Goldeneye shows up with the flock of Common Goldeneye that populate the inland waters of Spaniard's Bay. Not to be fooled though, this bird is not easy to see. 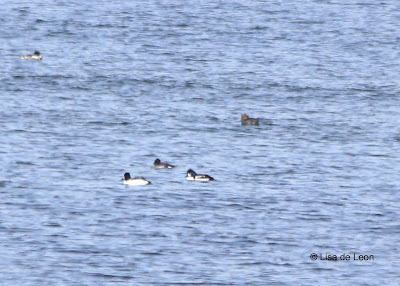 Spaniard's Bay is large and often fraught with high winds and white-capped waves. The best chance of seeing this bird is with a scope. From a distance, while bouncing, bobbing and diving, it is very difficult to pick out. I have tried many times and often left shaking my head at the impossibility of the situation. 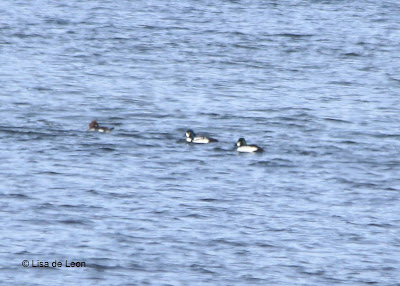 However, Monday was different. Margie M. and I pulled into the lookout, and much to our surprise, there it was right in front of us. When seen as close as this, it is obvious which is the Barrow's. I say close, but of course, that is relative. It was just off from the beach, but we were sitting in the car, and there was quite a distance between the Barrow's and us. The first picture in the series shows better the distance involved, the other shots are significant crops. 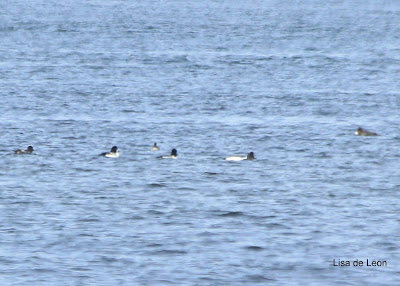 After snapping several blurry shots in the running car, we ventured to get out. Well, it was a bad choice. Sea birds don't like people. The minute they spot humans, no matter how far away, they turn and begin to move farther out from shore. That is precisely what they did. While I didn't get any good pictures, I did get a much better look than ever at this lone Barrow's Goldeneye. I certainly feel better equipped to identify this bird from a distance in the future.