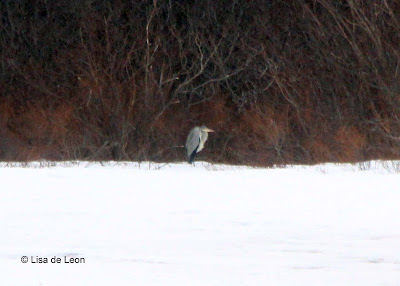 A mega-rarity has been sitting in Newfoundland for about two months now based on the reports from Little Heart's Ease. The minute the news broke this weekend, the 190 km stretch of road from St. John's to Little Heart's Ease was hot with birders rushing to see a reportedly weakened bird. When Margie Mcmillan and I arrived on Monday morning (a spur-of-the moment decision) we were met by birders from Clarenville, Glovertown and Bonavista.  Scopes, binoculars and cameras were trained on this Gray Heron. A chorus of Ooos and ahhs with a smattering of Wows could be heard all around. While we all oogled, the Gray Heron sat calmly far across the estuary, moving only its head. Reports from later in the day indicated that it did become more active. Concern about its health is passing as yesterday's report was that it was moving about a lot and eating well. 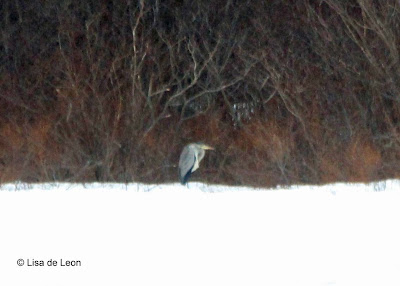 Just how rare is this bird? Check out Bruce Mactavish and Jared Clarke's blogs (links on right side of this page) to get the details on North American sightings of this European, Asian, and South African bird. It just shouldn't be here, but it is, and it is delighting people from the area as much (well, almost as much) as it is the long-time birders who have been awaiting its arrival.