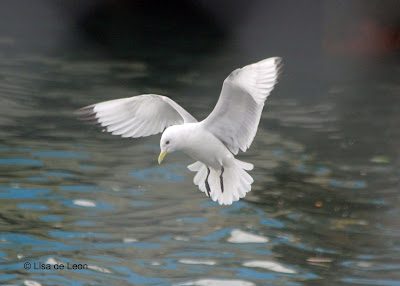 As further evidence of the coming of Spring, Black-legged Kittiwakes have been spotted at Cape Spear and at Pier 17. These gulls often spend most of the winter at sea and return to the coast where they breed on cliffs. There is a cliff on the north shore at Cape Spear where they are commonly seen during breeding season. 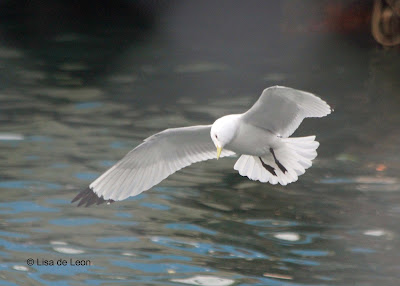 These Black-legged Kittiwakes  photographed at Pier 17 were so close and yet so far. They flew in and went down behind the rocks near the protected area behind the Port Authority. They were fairly easily seen through the fence with binos, but the camera just couldn't maximize the opportunity through the 2" squares of the chain-link fence. 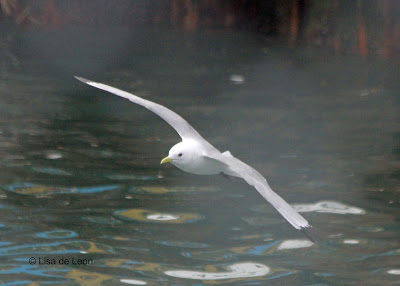 How frustrating is the new security that has been imposed at Pier 17 and other areas of the harbour! Many pleasurable moments of watching birds have been impeded by the distance and barriers. What could possibly be so secret that a few birders could present a security risk? There are so many wasted areas of a beautiful harbour. For instance, erecting a wall of winter salt on the harbour so that it blocks one of the most scenic views of the city? There have to be other places. Have we lost sight of the simple pleasures? 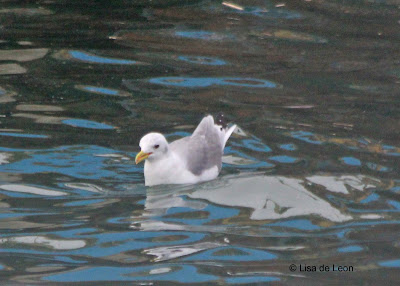 Well, it is what it is, and I guess we just have to live with it, but it is nice to dream. Wouldn't it be amazing if the province recognized the value of all of the wonderful birds that grace us with their presence. There are so many areas, including Pier 17, where small bird blinds could be erected to provide an unobstructed view of all of these birds. 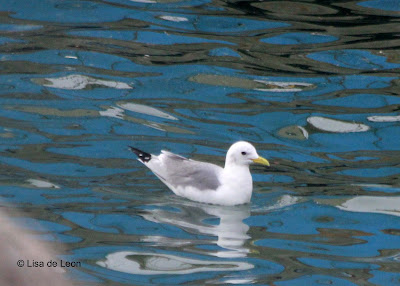 To my knowledge, there is only one blind provided, and that is at Pippy Park. If there were a more comfortable viewing blind erected at Cape Spear, who knows what birds may be spotted because watchers could actually stay long enough to look without freezing or being blown away. It seems to just make good sense to promote the environmental health of this province by making it easier for residents and visitors to view the regular, yet amazing, birds. The rare species that have been known to drop in, i.e. Yellow-legged Gull, Slaty-backed Gull, Pink-footed Goose and more already do attract a number of out-of-province birders.  Why not promote this resource to increase our exposure on the world stage of birding.
Developing a tourism ad with the flavour of the current spots to focus on the amazing birding opportunities would certainly have an appeal to a large population.
Posted by Lisa de Leon at 9:15 AM