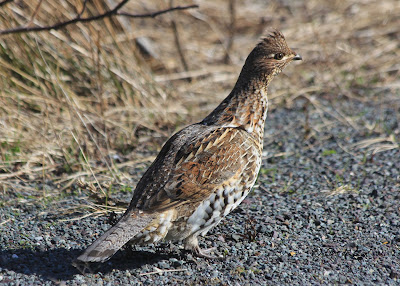 Some say the Ruffed Grouse is not the sharpest tool in the shed, but that doesn't take anything away from its individuality. The Ruffed Grouse is mainly a ground dwelling, game bird. It is interesting that I never really search for this bird, but they just seem to pop up here and there.  I am always delighted. 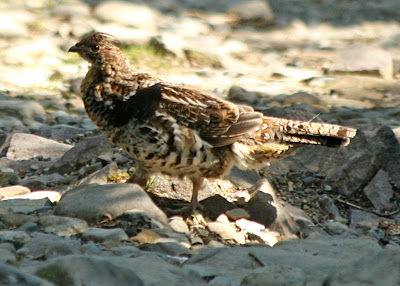 Sometimes they just walk right out onto the road or trail.  I have seen them settle down in a dusty lane and seemingly bathe in the dirt. When they are out in the open and are approached, they seem confused about which way to go to seek safety.  They will stand and stare, move a bit in one direction, turn and go in the other direction, and finally, when I get closer, they bolt into the cover of the brush. 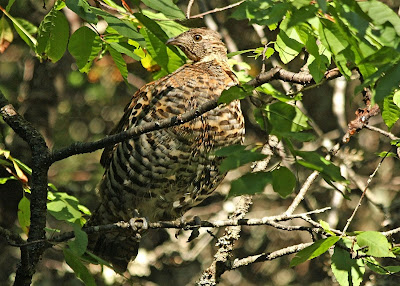 Sometimes they will fly up into a tree and sit very still until danger passes. I have often flushed a Ruffed Grouse when traipsing into the woods in search of some other bird.  The quick, loud flutter gives away their presence.  Yet, knowing they are somewhere nearby, it is very difficult to locate them as their camouflage is very effective.  Other times, the loud drumming created by the rapid beat of the wings will give them away.  I have yet to see one perched on a rock creating this amazing sound, but I have heard it several times. 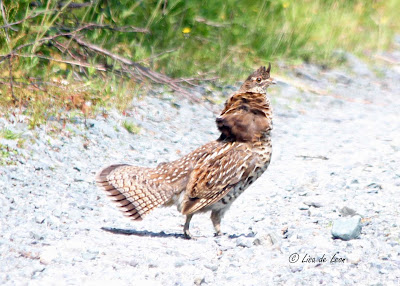 Then, of course, their is the ruffed neck for which this bird was named. Until this July, I hadn't seen flared neck.  While this is not the best example of it, it gives me an idea of what it must look like when in full display. Let's see:  I have seen maybe two dozen Ruffed Grouse, but I have yet to see them drumming or displaying. This very engaging, hen-like bird has many dimensions of behaviour that make me perk up every time I come across one. One of these days, I will see it all. 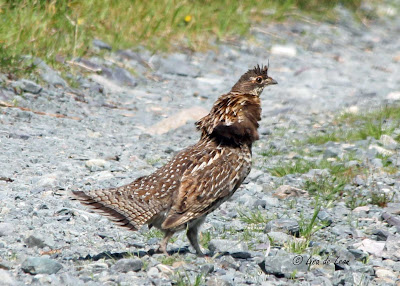 These last two shots were taken on July 2nd of this year.  It was on July 7th last year when I saw a grouse in the very same area with a very young baby.  I guess it was just a few days too early this year.  I am learning that you can almost set your clock by bird behaviour.

Even though summer birding is winding down, the opportunities to see and photograph this bird will remain constant as the Ruffed Grouse is a year-round resident of this province.﻿
Posted by Lisa de Leon at 6:59 AM