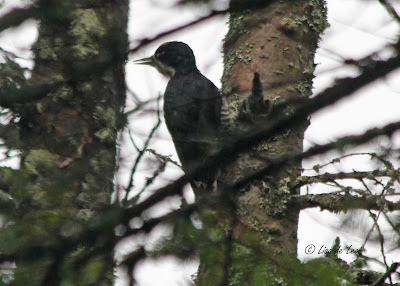 With not much time and very poor lighting, I was able to snap a few shots before this male Black-backed Woodpecker, found at Long Pond, flew away. There was no missing his presence.  When I rounded a bend in the trail, I could hear its sharp "kik" long before I could see it. 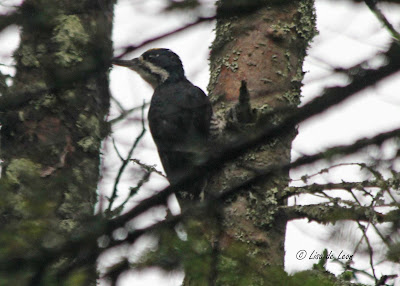 This is only the fourth Black-backed Woodpecker that I have seen. Two males, one female and one fly-by, gender unknown. Two of these I have seen this year. As reported earlier, the first was a female located on Bauline Line at the end of June.  This male was found on July 31 on the trail around Long Pond.  Black-backs have been spotted in this location for several years. 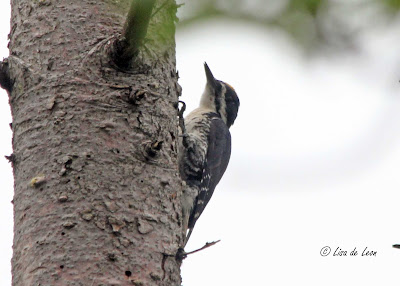 The female of this species seems to dine higher up in the tree than the male. While both the male and the female feed the young, the female seems to feed them more often. 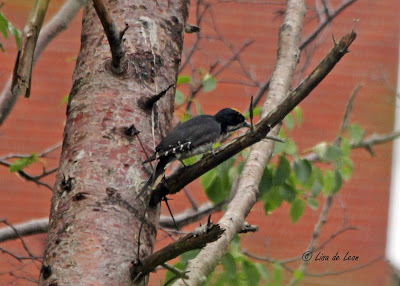 The Three-toed Woodpecker is also found in Newfoundland, but I have never seen one. There is a great similarity between the three-toed and the black-backed, with the main difference being the solid black back for which this species is name.  I will watch closely for the laddered white back on any future large black woodpeckers that I come across. Who knows?

By the way, a Hairy Woodpecker has shown up a couple of times on Blackhead Road drumming on a power pole near bus stop area.
Posted by Lisa de Leon at 7:56 AM