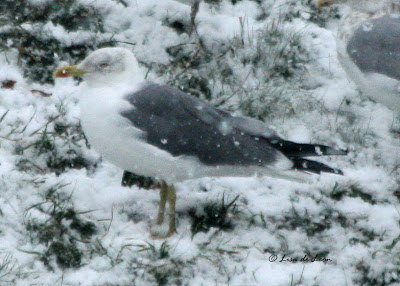 Not every day is suitable for photographing birds, but that doesn't stop me from winging it.

On Tuesday, we had our first minor snowfall. There were eight traffic accidents during the rush hour and many close calls. Many, like me, have not found the time to get our snow tires on so for us, driving has to be a particularly cautious venture. Since I had to go out anyway for an errand, I decided to squeeze in a little birdwatching. 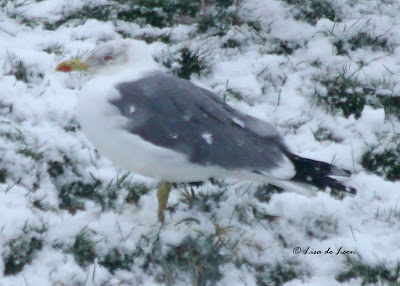 I started in the village of Quidi Vidi where a White-winged Dove had been located. When I got there, I was shocked and disappointed to find a large city crew was ripping up the road. Big machines roared and growled and few birds sang. I looked around and was able to find the Mourning Dove but not the White-winged Dove on that occasion. 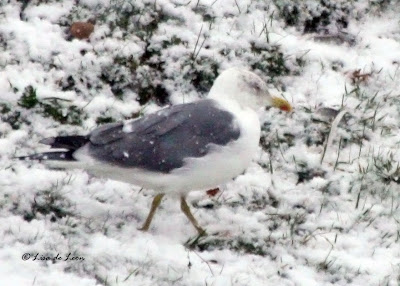 I left the area wondering if I would ever see the White-winged Dove. On my way home I decided to detour through Pleasantville to have a look at the hundreds of seagulls that often rest on a field in that area. I pulled off to the edge of the road where there was another car parked. I immediately saw the big lens of the camera and thought there must be something special sitting in the field. Curiosity got the best of me and I pulled up beside the other driver and asked if he could see anything special. 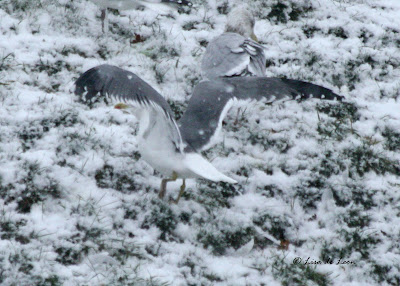 He told me that he had spotted a Yellow-legged Gull among the 750 gulls on the field. I pulled ahead of him and began scanning. Soon, the seasoned birder came to my car to see if I had located it. He quickly pointed it out to me. The snow began to fall with more intensity. At my distance I was only getting a blurry vision of the bird through all of the flakes.

I waited until the other helpful birder left before I got out of my car and began to work my way closer to the bird. 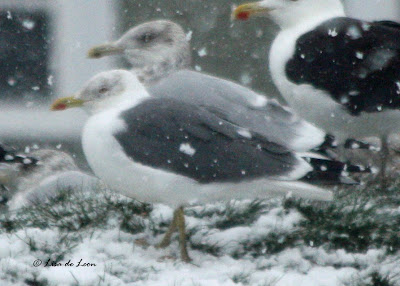 I crept ever so slowly and quietly until I got within a better range of the gull. The snow was sticking to my lens and my eyelids. I still figured a poor shot was better than no shot. The gulls all remained calm and I got fairly close. I have added one shot of the Yellow-legged Gull with its wings outstretched to better show its wing markings. I also included one shot of the YLG with a Herring Gull and a Great Black-backed Gull in the background for comparison. The YLG has a grey mantle that is shaded between the light grey of the Herring Gull and the dark black mantle of the BBG. The YLG is also significantly smaller than both of these other gulls.
This gull is likely one of two that were spotted earlier in the Fall. There seems to be a consistent pattern of visits by the YLG to this province. Many birders travel great distances to see this particular gull, and it is well worth it. Note:  The remaining smudges of dark color on its head will soon disappear and the head of this gull will be snow white throughout the winter.

I finished my looking and my picture-taking and walked just as slowly back to my car. I thought the other birder might post the sighting, and I wanted to leave the gull right where it was so that other birders could have a chance to view this YLG.

Additional note:  The sun is popping out and the temp is reasonable. It would be a great day for birding around the city, but not for me - my car is in the shop getting the snow tires installed.
Posted by Lisa de Leon at 9:54 AM